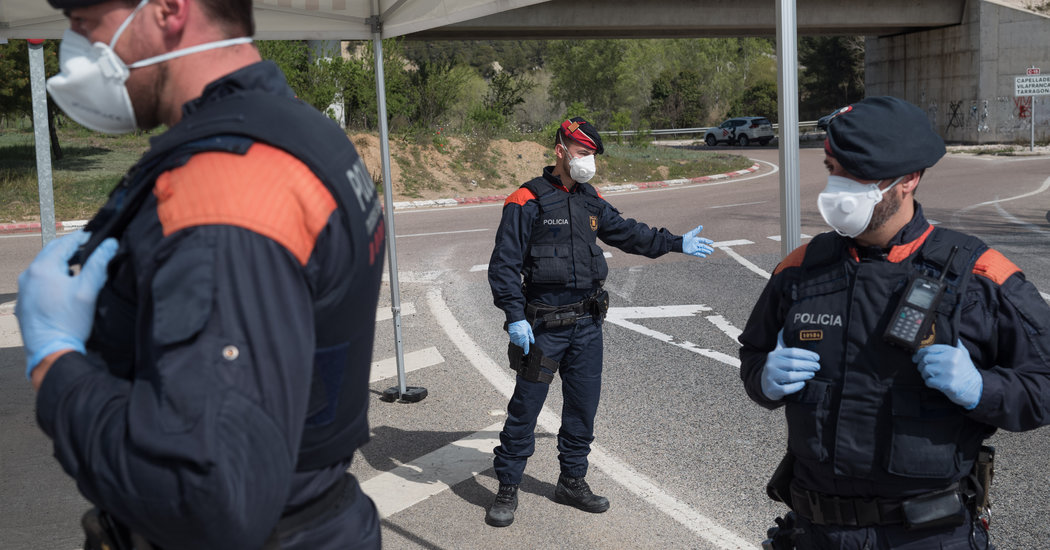 LA POBLA DE CLARAMUNT, Spain — When María José Rodríguez heard on local television that her town in northeastern Spain would be locked down within hours, she knew she had to leave or risk losing her family’s business.

She grabbed a bag of groceries, a fresh change of clothes and her car keys, said goodbye to her husband and drove to her son’s apartment in a nearby village, above the family bakery. For more than two weeks, she has been locked out of the town, Igualada. Her husband has been locked in, and they have no way of knowing how long it will go on.

“Had I not moved out to keep running the bakery, we would have had to close it,” Ms. Rodríguez, 63, said at her shop in the village of La Pobla de Claramunt. “But we’ll be fine, and I call my husband 50 times a day. At the very least.”

Many European countries have imposed various forms of lockdowns to contain the epidemic, but Igualada, an industrial town 30 miles northwest of Barcelona, stands out. Even as Spain has imposed a nationwide lockdown, it has cut Igualada off from the rest of the country — a lockdown within a lockdown.

After its hospital was identified as a hub of a regional outbreak that has reached nearly 20,000 coronavirus infections and more than 2,500 deaths, officials sealed off Igualada and three smaller neighboring towns, at midnight on March 12, stranding about 65,000 people.

Police forces guard every access point, allowing only essential workers to enter and leave. The barriers have divided families like Ms. Rodríguez’s, put people out of work and thrown households into uncertainty for weeks, if not more.

“We are in a cage, and we are learning how to stop trying to control everything,” said Gemma Sabaté, a 48-year-old physical therapist stranded there.

Over 8,100 people have died from the new coronavirus in Spain, the second-highest toll in the world after Italy. Nearly 95,000 people have tested positive, among them thousands of health workers.

In Igualada, as doctors and nurses battle the virus in the hospital, residents have shared a sense of duty, self-sacrifice and resilience.

Most of the restrictions in the town are similar to those throughout the country: people are allowed to leave their homes only to buy food, walk their dogs and tend to emergencies. But the rules are more strictly enforced in Igualada, the traffic more tightly controlled.

When Marc Castells, the mayor of Igualada, goes home at night, he says he feels like the last character standing in a movie, “except it’s not a movie.”

Those inside and those outside the cordon can meet at checkpoints, but only to exchange essential goods under the eyes of police officers. On a recent morning, Toni Navarro delivered air-conditioners for the hospital to his colleague Jordi Morente, who lives in Igualada. They both wore masks and gloves.

“If you need anything, call me, I’ll drive anytime, even at night,” Mr. Navarro said as they exchanged an elbow bump.

Alba Vergés, Catalonia’s regional health minister, lives in Igualada but she has been forced to stay away, leaving her family stranded inside.

“I never thought we would have to restrict people’s freedom of movement,” she said. “But 10,000 people get out of Igualada every day, mostly to Barcelona. We had to stop the virus from getting out.”

With the area’s isolation extended from 15 days to 30, Igualada’s streets have remained mostly deserted and eerily silent, residents say, except for the nightly applause for health workers. On the town plaza, whose terraces are usually filled with life, there is only the sound of a small fountain.

Of course, there have been some cracks in the confinement. Igualada’s streets have grown busier in the mornings as the lockdown has dragged on, and some young people have mingled outside when the city is asleep. Others have used an underground parking lot to exercise, or taken their dogs for extended walks along the nearby river.

But many residents said they wanted to lead by example, because they were among the first in the country to face the epidemic.

“There’s some responsibility, there’s a fear of being contaminated,” said Josep Maria Solé, a 54-year-old public employee. “And then, there’s the proximity with the hospital.”

The calm outside contrasts with what nurses and doctors describe as a chaotic fight within the hospital. Of nearly 600 people infected in the area, over 150 have been health workers. A third of the staff has been sent home.

“The hospital is collapsing,” said Raquel Jaume, a 61-year-old nurse who has had to self-isolate.

Another nurse, who asked to remain anonymous because she still works at the hospital, said the hardest times have been the 5-minute farewell calls that critically ill patients have with their families. “They are alone, and they are dying alone,” she said.

All nonemergency operations have moved to other hospitals, to make room for Covid-19 patients. With more expected, a sports facility has been converted into a field hospital. Dozens of health workers from other facilities have tried to fill in the decimated ranks.

But the lack of personnel, a hospital official has said, “is destroying us.”

Officials say that a dinner on Feb. 28 for more than 80 people, including dozens of health workers, may have fueled the outbreak. The hospital recorded its first case on March 8.

“We didn’t take this seriously enough,” Marc Arnaiz, a doctor in the internal medicine unit who has been infected, said of the early stages of the epidemic.

Regional authorities have in recent days reported nearly 200 new cases and a dozen new deaths, among the biggest increases since the lockdown began. “Everyone knows someone who has been infected or died in Igualada,” said Clara Lopez, a 28-year-old mother of two. “If not yet, it’s a matter of days.”

Nearly 70 people have died from the coronavirus at the hospital as of Tuesday, according to official tallies, but the authorities have conceded that the numbers could be much higher as only those who were tested have been counted.

In video calls with relatives, “we tell each other that everything is going well,” Ms. Lopez said. “But deep inside, we’re definitely not doing so well.”

Many fear that the lockdown will devastate the local economy. Igualada is famous for its textile makers and leather workshops that supply luxury brands throughout the world. But the industry, which Mr. Castells said employs 1,000 people, has come to a standstill.

“After the sanitary tsunami will come the economic tsunami,” Mr. Castells said.

Despite the confinement, the virus has spread out of Igualada. Dozens of cases have appeared in nearby villages, and over 20 residents in two local nursing homes have died.

Many locals living outside Igualada, like Sonia Quiñoa, have blamed the authorities for not conducting enough testing. Her father was hospitalized for pneumonia but was not tested until after his death, one of the first from coronavirus at Igualada’s hospital.

His family spent time with him in his last days, and Ms. Quiñoa her husband, Juan Antonio Mudarra, and their two children, soon developed symptoms. They said they urged the health authorities to check them, but were not tested for more than 10 days; both Ms. Quiñoa and Mr. Mudarra tested positive.

“We have been responsible enough to self isolate,” Mr. Mudarra said last month on the doorstep of the family house in La Pobla de Claramunt. But he said he wasn’t surprised that the virus had spread so widely and quickly.

“Health workers in Igualada are overwhelmed,” he said. “Residents inside are worried. And, we, outside, have been abandoned.”