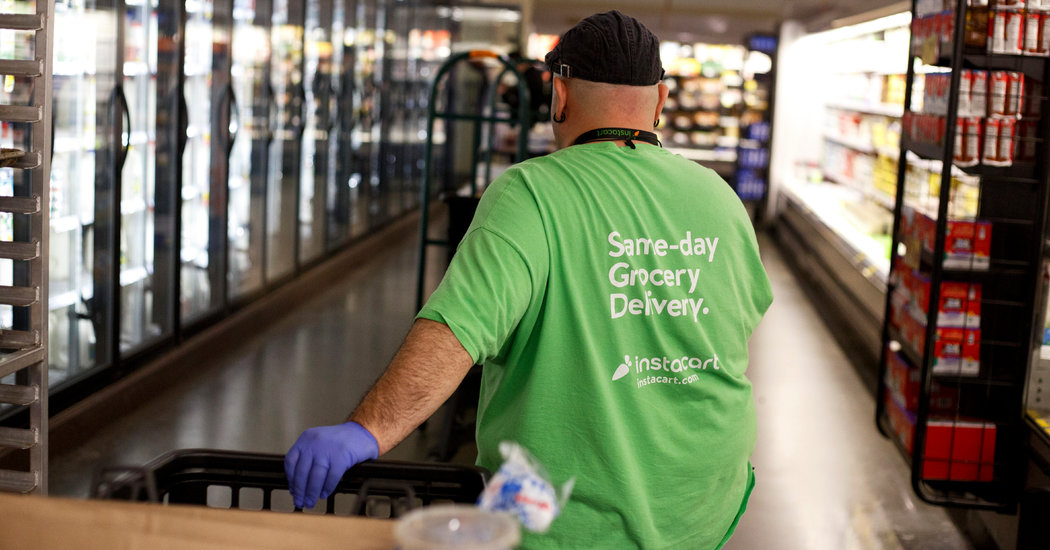 Signaling both growing anxiety and growing solidarity brought on by the coronavirus pandemic, workers in a variety of occupations across the country are protesting what they see as inadequate safety measures and insufficient pay for the risks they are confronting.

On Monday, a contingent of workers who fulfill orders for the grocery delivery service Instacart stayed off the job, demanding greater pay and better access to paid leave and disinfectant.

A group of workers walked off the job at an Amazon warehouse in Staten Island on Monday, and a sickout called by Whole Foods Market workers is set for Tuesday. Last week, nurses in the Bronx protested a lack of protective equipment, and sanitation employees in Pittsburgh staged a protest over working conditions.

Labor experts and union organizers said anxieties related to the pandemic appeared to be widely shared among front-line workers across different companies, job categories and classifications. “Whether they’re an employee of a grocery store, or in this case an Instacart worker, they all have the same concerns,” said Bob O’Toole, the president of United Food and Commercial Workers Local 1546 in Chicago, which represents about 19,000 workers in the grocery, meatpacking and food-processing industries. The union has organized some Instacart workers and is trying to enlist more.

Instacart is a service that allows customers to order groceries from stores for delivery. Some of its workers are employees and are stationed within participating stores, where they fulfill orders. Others are independent contractors who drive the filled orders to customers. These contractors sometimes fulfill orders when Instacart employees are not available before driving them to the customer.

Though the size of the Instacart walkout was unclear, organizers said they believed that thousands of the company’s 200,000 workers were refusing to report to the job. They hoped to pressure the company by adding to an order backlog as locked-down Americans increasingly get staples delivered rather than venture out.

But the company denied any effect from the action. “We’ve seen absolutely no impact to Instacart’s operations,” a company representative said, adding that there were 40 percent more people working to fulfill orders — or as Instacart calls them, shoppers — compared with the comparable period a week earlier.

In a post on Friday, a group called the Gig Workers Collective, which organized the strike, said workers were walking off the job until Instacart provided them with more protective material like hand sanitizer and disinfectant wipes, an extra $5 per order as hazard pay and an increase in the default tip to 10 percent of the order from 5 percent. The workers are also seeking an expansion of sick pay — currently limited to workers with a Covid-19 diagnosis — to include anyone with a doctor’s note urging them not to be on the job.

Instacart said Sunday that it would raise the suggested tipping amount to the percentage that a customer last tipped. And the company said it was working with a manufacturer to make hand sanitizer to distribute to shoppers.

The company has also said that workers will be eligible for bonuses and incentives.

“Our team has had an unwavering commitment to prioritize the health and safety of the entire Instacart community,” Nilam Ganenthiran, president of Instacart, said in a statement. “We’ve been evaluating the Covid-19 crisis minute by minute to provide real-time support for Instacart shoppers and customers.”

Laura Richey of Springfield, Ill., who until this month worked as a driver for Uber and Lyft and fulfilling orders for Instacart, said she tried to qualify for the company’s sick pay after waking up with serious Covid-19 symptoms on March 21, including breathing difficulty. Ms. Richey was able to receive a test for the illness, and a doctor instructed her to isolate herself. But she has yet to receive test results, she said, and Instacart has told her she does not qualify for sick pay.

“What they’re saying is if it’s not from the C.D.C. or a public health official, it’s a no-go,” Ms. Richey said in an interview.

Some workers said they were sympathetic to the goals of the protest but reluctant to take part.

“I don’t mean to equate grocery store workers with health care workers, but there is a feeling that grocery workers are important during this crisis and it feels frustrating not to be supported,” said Sarah Brazier, 30, who has been working for Instacart for nearly a year, fulfilling orders at an H-E-B grocery store in Austin, Texas.

Still, she said, she was concerned about losing her livelihood if she were to walk off the job. Ms. Brazier said that most of the Instacart personnel at her store turned up for work on Monday and that it appeared to be a fairly normal day.

Several current and former Instacart workers said it was notable that the walkout appeared to unite those who are classified by the company as independent contractors with so-called in-store shoppers, who are employees and only prepare orders within stores.

In the past, only contractors had taken part in similar actions. But once a Vice article about the walkout began circulating on Friday, said Ryan Hartson, who is an in-store Instacart employee in Chicago, he and other employees decided to join in. “It’s the nature of being front-line workers,” he said. “It feeds into ‘Oh, we need to take action, go forward and do that together.’”

Jake Rosenfeld, a sociologist at Washington University in St. Louis who studies labor, said that organizing typically accelerated in good economic times rather than recessions, with the glaring exception of the Great Depression, in which a sense of despair helped bring workers together.

But Mr. Rosenfeld said he was skeptical that workers could capitalize on the current anxiety and frustration absent favorable legislation that enables organizing, a more accommodating response from employers or more robust assistance from established institutions, like existing unions.

Mr. O’Toole, the Chicago union official, said there were hundreds of Instacart employees in the area that his union was trying to organize after helping to organize a small group in suburban Skokie. He said the call for the strike was “clearly resonating.”

There has been ferment at other grocery operations as well. Workers at Whole Foods have called for a sickout on Tuesday to demand paid leave for all workers who must isolate themselves and a doubling of pay to compensate for the risk of working.

At Trader Joe’s, a loose group of employees trying to form a union circulated a petition calling for the company to offer “hazard pay” at a rate of time and a half.

The activism by workers at companies like Instacart and Whole Foods “definitely was inspiring,” said Kris King, a former Trader Joe’s employee in Louisville, Ky., who has been collaborating with former co-workers to submit a list of demands to the company, including hazard pay. “It made us feel like we could actually have that power to do something like that.”

The Amazon walkout in Staten Island was led in part by Christian Smalls, a worker there who said he had been alarmed at work last week to find a colleague with puffy red eyes who was visibly ill.

Mr. Smalls said that he had advised the colleague, who later tested positive for the coronavirus, to go home immediately, and that he had told management that the center should be closed for two weeks because there was no way to know how many other workers had been infected.

“She had been there the previous week,” said Mr. Smalls, observing that other workers at the facility are complaining of symptoms like fever. “We don’t know how long she’s been positive.”

Organizers said several dozen workers had taken part in the protest. Amazon said fewer than 15 of the warehouse’s roughly 5,000 employees had done so.

Timothy Carter, an Amazon spokesman, said the accusations were unfounded.

“We have taken extreme measures to keep people safe, tripling down on deep cleaning, procuring safety supplies that are available, and changing processes to ensure those in our buildings are keeping safe distances,” he said.

Mr. Carter said Mr. Smalls was on a 14-day self-quarantine at the company’s request with full pay. Mr. Smalls, who took part in picketing outside the facility on Monday, said it was his own choice not to clock in, and that he was not previously aware that he would be paid.

Not long after the protest, an Amazon spokeswoman said by email that Mr. Smalls had been fired because he had violated social-distancing guidelines multiple times and had come to the site Monday after having been told to stay home, “further putting the teams at risk.”