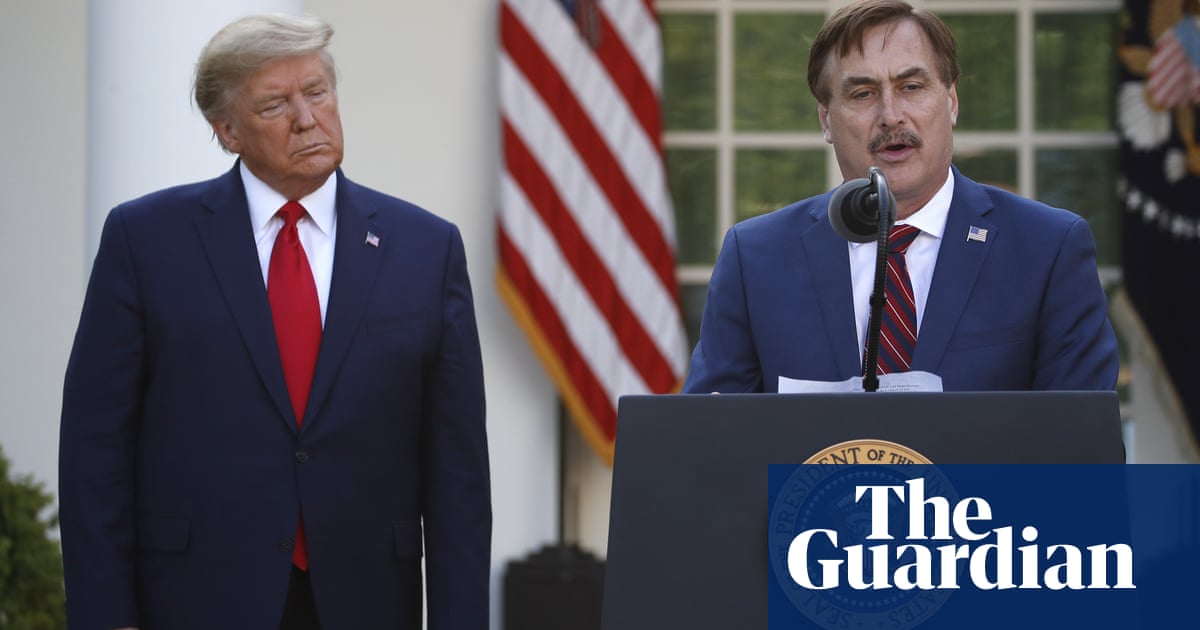 Donald Trump was accused on Monday of turning his daily White House coronavirus briefing into an advertising spot for corporate allies, even as the number of US cases topped 160,000.

The president paraded several company leaders in the White House Rose Garden, starting with Mike Lindell, the chief executive of MyPillow, who has become a regular cheerleader for Trump at his campaign rallies.

Trump praised companies for doing their “patriotic duty” by producing or donating medical equipment to meet America’s most urgent needs. “What they’re doing is incredible,” he said. “These are great companies.”

He went on to invite Lindell, Darius Adamczyk of Honeywell, Debra Waller of Jockey International, David Taylor of Procter & Gamble and Greg Hayes of United Technologies to make short speeches. He introduced Lindell as a “friend” and riffed: “Boy, do you sell those pillows, it’s unbelievable what you do.”

Lindell then stood at the presidential podium and said his company has dedicated 75% of its manufacturing to producing cotton face masks. “By Friday I want to be up to 50,000 a day,” he said, going on to thank Trump for his “call to action”.

Then, in a bizarre gear change, Lindell went into campaign rally mode and referenced the date of Trump’s election. “God gave us grace on November 8, 2016, to change the course we were on,” he said. “God had been taken out of our schools and lives, a nation had turned its back on God.

“I encourage you to use this time at home to get back in the word, read our Bibles and spend time with our families.”

Lindell added: “Our president gave us so much hope when just a few short months ago we had the best economy, the lower unemployment and wages going up. It was amazing … We will get through this and get back to a place that’s stronger and safer than ever.”

Trump told reporters: “I did not know he was going to do that, but he’s a friend of mine and I do appreciate it. Thank you, Mike.”

The White House coronavirus taskforce briefings have become notorious for Vice-President Mike Pence and other officials paying homage to Trump’s “leadership” while he scolds reporters for being too negative.

This occurred again on Monday when Jim Acosta, chief White House correspondent at CNN, quoted some of Trump’s own statements back to him in which he claimed America has the virus “very much under control” and “it will go away”.

The missing six weeks: how Trump failed the biggest test of his life

The president retorted that the virus “will go away”, without offering a timeline, and praised his government’s efforts. “It’s almost a miracle the way it’s all come together, and instead of asking a nasty, snarky question like that, you should ask a real question.”

Later, questioned by Yamiche Alcindor of PBS, Trump again snapped: “You should be saying congratulations instead of asking a really snarky question.”

The administration has extended federal guidelines on social distancing to 30 April as the country braces for what experts estimate could be between 100,000 and 200,000 deaths.

State governors have complained of a crippling shortage of ventilators, masks and other critical equipment. But on Monday Trump insisted mass production and distribution were under way and highlighted the building of a temporary hospital in New York and arrival there of a medical ship.

He said the US would be sending around $100m worth of “things – surgical and medical and hospital things” to Italy, one of the hardest-hit countries.

The US has the biggest coronavirus caseload in the world after chronic failings to carry out testing in the crucial early weeks.

Ever the TV host, Trump opened a cardboard box – marked “Covid-19” with images of the virus – containing a machine made by Abbott that can administer a test in just five minutes. Stephen Hahn, commissioner of the Food and Drugs Administration, said: “We’ve had a substantial addition to testing with the authorisation of point-of-care tests, especially the Abbott point-of-care test, which the president has pulled out of the box.”

Trump told reporters: “Over one million Americans have now been tested, more than any other country by far.” He has long been making such a claim even as the US trailed other countries, such as South Korea, on testing per capita.

According to the Covid-19 Tracking Project, a journalist-maintained database, there have been 945,793 coronavirus tests administered in the US as of Monday, although that number could be higher, as the results of negative tests can take longer to report.

“I know South Korea better than anybody,” he argued. “It’s very tight. Do you know how many people are in Seoul? Do you know how big the city of Seoul is? Thirty-eight million people. That’s bigger than anything we have.”

The population of Seoul is less than 10m.