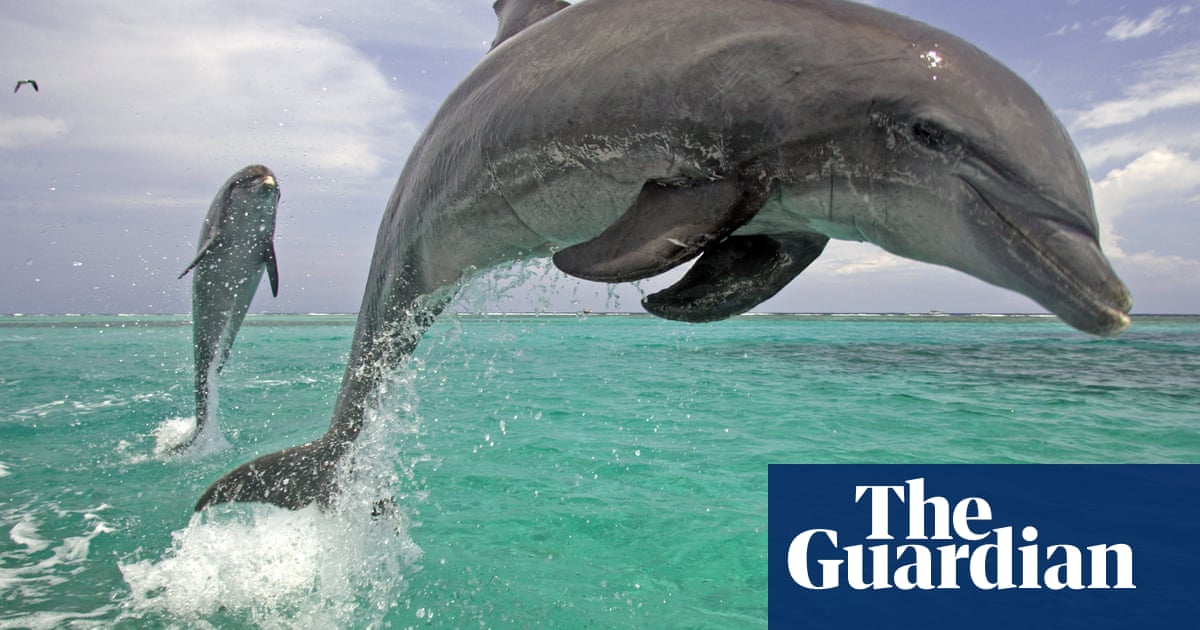 Male dolphins synchronise their calls while working together as a team, researchers have revealed, in the latest research to show behaviour thought to be unique to humans also occurs between other animals.

There are numerous examples of creatures either moving or making noises in sync – among them, male fireflies flash at the same time and male katydids produce sounds together.

However, experts say such behaviour is generally down to rivalry.

“If we think about synchrony, the precise occurrence of events in time, in animals it is always competitive as a means of attracting females,” said Dr Stephanie King, co-author of the new research at Bristol University.

In humans, however, synchronised behaviour is linked to bonding. “In humans it is cooperative,” said King, adding that besides humans, only dolphins have been found to show physical synchrony while cooperating, while humans were thought to be unique in cooperation also being linked to precise synchronization of their voices.

Now, it seems, we are not so special.

“Physical and acoustic synchrony and coordination also occurs in dolphins in a cooperative context,” said King.

Writing in the the journal Proceedings of the Royal Society B, King and an international team of colleagues report how they gathered data from bottle-nosed dolphins in Shark Bay, Australia, between June and November from 2016 to 2018.

Male bottlenose dolphins within a social group team up in smaller groups of two or three and, among their activities, herd females – a behaviour particularly common during the mating season. This allows the males to monopolise the female and prevent her from being ‘stolen’ by a rival social group.

Researchers have previously found members of these small alliances move in sync – including leaping, turning and surfacing at the same time. That, said King, is thought to aid bonding between males. “It is a signal of unity,” she said.

But now researchers have found dolphins also match up their vocalisations.

The team followed 59 male dolphins from seven different lifelong social groups, recording sequences of short, low frequency pulse sounds, or pops, they produce when they teamed up in pairs or trios to hustle females. Overall the team recorded 453 sequences of pops, 172 of which were made by multiple males.

The team then looked at data for a number of these pairs to explore patterns in the vocalisations – focusing on sequences of pops, since pops are not produced on their own.

When the team looked at five dolphin pairs from different social groups, they found four pairs showed partners matching the tempo of their popping sequences. “One male is getting faster then slower then faster, and the other male is matching him in that,” said King.

What’s more, data from three pairs of dolphins from different social groups showed males started and stopped their sequences of pops in unison, with 83% of each pop sequence, on average, overlapping with that of their teammate.

The team adds that as the dolphin pairs were from different social groups, the findings are not a quirk of one particular collection of males: indeed further analysis on the wider data set showed such behaviour was widespread.

Crucially, said King, the findings reflect vocalisation during cooperative rather than competitive behaviour. “The males aren’t attracting a female here, they have her, they are herding her,” she said, adding that males seem to father similar numbers of offspring.

That, she said, means that humans are not the only animals for which moving and vocalising in sync is linked to cooperative behaviour.

Dr James Herbert-Read, a biologist at Cambridge University, who was not involved in the study, described the research as fascinating. “Why these dolphins synchronise their calls remains unclear, but the authors aim to address this in future studies,” he said.