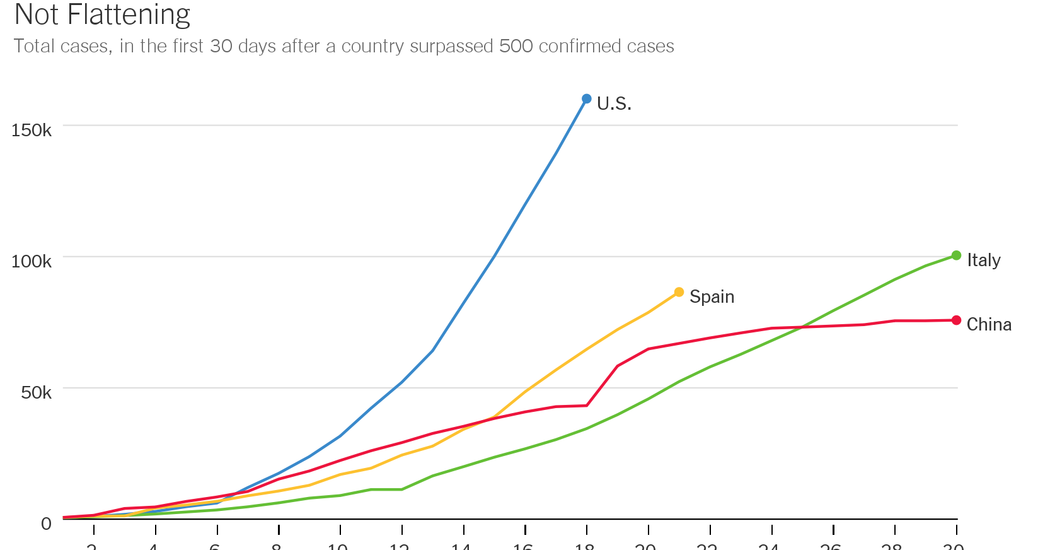 This article is part of David Leonhardt’s newsletter. You can sign up here to receive it each weekday.

China and South Korea have flattened their curves. Italy, Spain, Germany and the Netherlands have begun to flatten their curves.

The United States still has not.

More than half of all confirmed coronavirus cases in the United States have been diagnosed in the past five days. Depending on what data source you use, yesterday was either the worst day for new cases or one of the worst. And more than 3,000 Americans with the virus have died, meaning the death toll has now exceeded that of the 9/11 terrorist attacks.

As you can see in the chart above, the other three countries with the world’s largest number of confirmed cases — Italy, China and Spain — were all making significant progress at a similar point in their outbreaks. But the response in the United States has been slow and uneven.

President Trump spent almost two months denying that the virus was a serious problem and spreading incorrect information about it. Since then, he has oscillated between taking sensible measures and continuing to make false statements. (Yesterday, he said that hospital masks might be “going out the back door” — suggesting that doctors or somebody else were stealing the masks rather than using them.)

Many state leaders — both Democrats, like Gov. Jay Inslee in Washington State, and Republicans, like Gov. Larry Hogan, in Maryland — have done a much better job. Altogether, the federal, state and local policies on social distancing may be starting to have an effect. The number of fevers recorded nationwide is falling, as Donald G. McNeil Jr. of The Times notes, which is an encouraging sign.