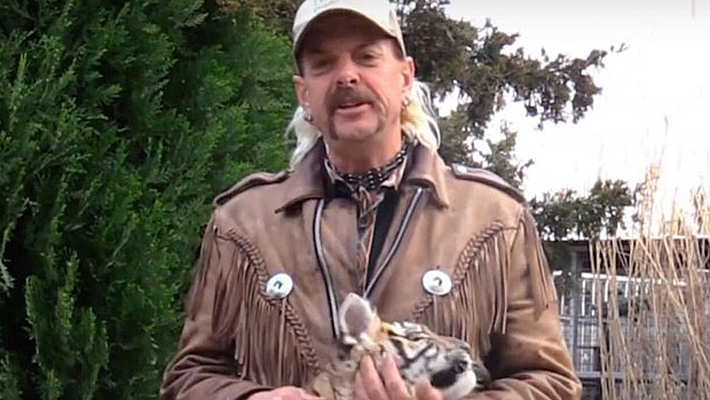 In case you thought the outrageous story behind Netflix’s Tiger King couldn’t get any weirder, a new detail has emerged with a surprising celebrity connection. This time, though, it’s not Britney Spears.

According to Vulture, the seven alligators and one crocodile that died in a suspected arson fire featured in the Netflix series had belonged to Michael Jackson. A manager for Joe’s Oklahoma zoo reportedly acquired the reptiles when Neverland Ranch closed down, and Exotic took dubious care of them. It’s not a good sign when you’re describing an animal “boiling alive in a towering inferno” in a YouTube video.

As for the suspicious circumstances surrounding the fire that burnt down the crocodile enclosure with Jackson’s alligators inside, and more conveniently, the production studio for “Joe Exotic TV,” the docuseries seems to suggest that Exotic (real name: Joseph Maldonado-Passage) could have been behind the arson despite blaming animal activists. Via PopSugar:

Could Joe Exotic have set the fire himself? Or pay someone off to do it? According to his staff, he went to a funeral during the time of the fire. Returning to the wreckage, he offered a $10,000 reward for information about the arsonist. He blamed animal activists (and, of course, [Carole] Baskin). But was this all set up by Maldonado-Passage as a publicity stunt? It’s possible. This could’ve been a ploy to spite [“Joe Exotic TV” producer Rick] Kirkham or destroy incriminating evidence of animal abuse and other illicit activities on tape. Plus, the fire could’ve been a set-up for sympathetic people to give him money — after all, Baskin’s lawsuit drained him.

For the record, the case has yet to be solved by authorities, but you can watch the original The Oklahoman news report below where Joe Exotic is referred to as “Joe Schreibvogel” because, again, this story never stops getting weirder. As for how police knew the fire was an arson, deputies could still smell the gas when they arrived on the scene, so whoever did it was looking for the most bang for their buck.