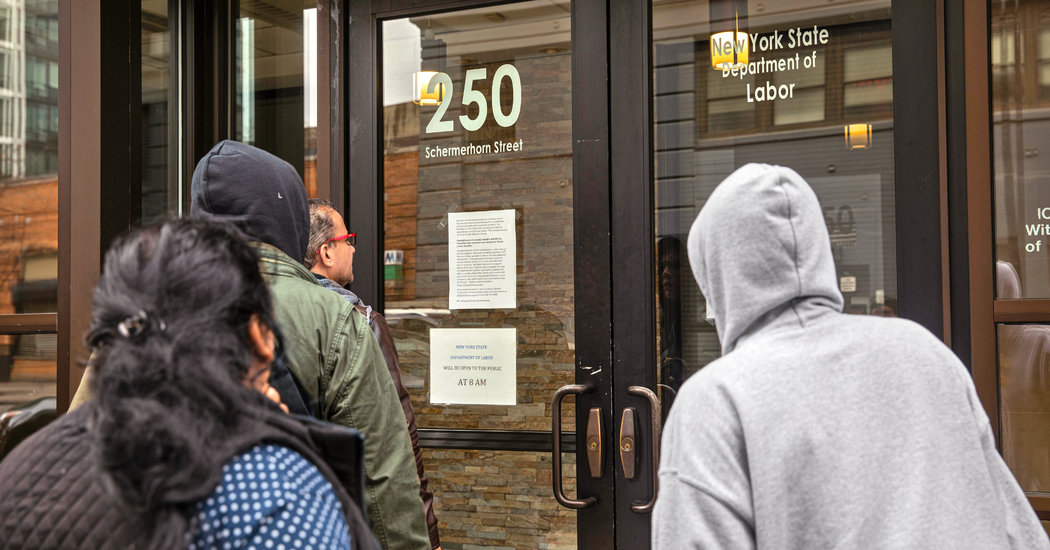 WASHINGTON — President Trump and congressional Republicans spent the last three years fighting to cut anti-poverty programs and expand work rules, so their support for emergency relief — especially in the form of directly sending people checks, usually a nonstarter in American politics — is a significant reversal of their effort to shrink the safety net.

It has also intensified a long-running debate about whether that safety net adequately protects the needy in ordinary times as well.

“The crisis has made the need for benefits much more visible and the people who receive them seem much more sympathetic,” said Jane Waldfogel, a professor at the Columbia University School of Social Work. “Progressives will argue for making many of these changes permanent, and conservatives will worry about the costs and potential burden on employers, but this has profoundly changed the playing field.”

Those who support more government help for low-income families say the crisis has revealed holes in the safety net that the needy have long understood. It is a patchwork system, largely built for good times, and offers little cash aid to people not working. It pushes the poor to find jobs, and supports many who do, but offers little protection for those without them.

Most rich countries have universal health insurance and provide a minimum cash income for families with children. The United States has neither as well as higher rates of child poverty.

And to a degree that casual observers may not understand, the Trump administration has tried both to shrink safety net programs and make eligibility for them dependent on having a job or joining a work program.

“Relative to other wealthy nations, we’ve always had a fragmented and weak safety net,” said Donald P. Moynihan of the McCourt School of Public Policy at Georgetown University, who is co-author of a book on administrative barriers to aid. “When the government really wants a program to succeed, it takes the simple and more direct approach — sending people checks.”

But while Republicans have agreed to emergency checks, many did so reluctantly, thinking the safety net is already too large. The $2 trillion rescue package ran into last-minute delays last week when four Senate Republicans said the temporary increase in unemployment benefits was too high and would dissuade people from working.

Conservatives say the limits on public aid are a strength of the American system, and they credit work requirements for cutting child poverty in recent years to record lows. If anything, most would go further in extending work requirements to programs where they have been limited or missing, like food stamps and Medicaid.

“It would be a big mistake to make a long-term fundamental change in the safety net in the heat of a very unusual and hopefully very temporary crisis,” said Robert Doar, president of the American Enterprise Institute, a conservative research group. “The combination of work plus assistance has lifted many millions of people out of poverty. I don’t want to give that up and go back to an entitlement system that in good times leads to people passing up the opportunity to work.”

Mr. Doar was referring to the fight over President Bill Clinton’s pledge to “end welfare as we know it,” which decades later still shapes the poverty debate.

The 1996 law Mr. Clinton signed created a new program of cash aid for families with children (Temporary Assistance for Needy Families) that abolished guarantees of assistance and imposed time limits, work requirements and deep spending cuts. It prompted rare resignations from some of his aides, who feared it would hurt the poor.

The rolls plunged, falling more than three-quarters nationally and at least 90 percent in eight states. For every 100 poor families with children, only 22 now receive cash aid, from about 80 at the peak of the old welfare system, according to the Center on Budget and Policy Priorities. Benefit levels also fell, by at least a third in 23 states. To a degree few thought possible, welfare really did “end.”

But as one side of the safety net shrank, another grew — aid to low-wage workers. Many get refundable tax credits, food stamps and Medicaid, all of which have become more generous to poor workers. For a $10-an-hour worker with two children, two programs (the earned income and child tax credits) provide a combined $8,200 a year. In addition, 29 states offer tax credits of their own.

The result is a “work-based safety net” — more supportive of needy people with jobs but more precarious for those without them.

The economists Diane Whitmore Schanzenbach of Northwestern University and Hilary W. Hoynes of Berkeley found in 2018 that nearly all the growth in federal spending since 1990 has “gone to families with earnings, and to families with income above the poverty line.” They warned the imbalance “is likely to lead to worse outcomes” for the poorest children.

Conservatives point to falling poverty rates to argue the system has worked. By 2018, the share of children in poverty had fallen to about 13 percent, from 30 percent in the early 1980s. (The measure counts taxes and benefits and comes from Christopher Wimer and Sophie Collyer of Columbia University.)

Liberals argue that most of that poverty reduction occurred in the 1990s, when the economy soared and growth was widely shared, and has been sustained by the tax credit and food stamp expansions — with the latter a program many conservatives would cut. For the last two decades, most economic gains have gone to people at the top, which liberals say makes the need for assistance more pressing.

They also say the poverty rate underestimates hardship because problems like hunger and eviction persist above the poverty line. (The figure varies by location but was $25,700 a year for a family of four in Washington, D.C., in 2018.)

While the current free-fall in employment is unique, liberals say low-wage work is inherently unstable, since hours fluctuate, workers get sick, and jobs frequently end — as they are now doing on a vast scale over the coronavirus. Only about one in four unemployed workers collected jobless benefits last year, and for low-wage workers the share is lower.

“People are working in jobs over which they have very little control,” said Olivia Golden, director of the Center on Law and Social Policy. “They can be laid off for reasons that have nothing to do with their willingness to work.”

Despite the declines, child poverty in the United States remains higher than in most similar countries. About 17.2 percent of American children live on less than half the median income, said Timothy Smeeding, an economist at the University of Wisconsin, citing data from Luxembourg Income Study. That compares to 11.9 percent in Canada, 10.2 percent in the United Kingdom, and 9.4 percent in Ireland. The United States also spends less on needy families as a share of its economy.

“We should be doing better,” Mr. Smeeding said.

Importantly, the group found these problems came at least in part from the lack of money itself, and not just related factors like family structure or low parental education. It also found that safety net programs, by raising incomes, reduced the damage.

“The weight of the evidence shows additional resources help kids,” said Greg Duncan, an economist at the University of California-Irvine who led the study group.

Citing such findings, many progressives support a child allowance — a guaranteed income for families with children. The National Academy of Sciences found an annual benefit of $3,000 per child would reduce child poverty by 41 percent.

“Even in good times incomes are very volatile, especially for low-income families,’’ said Ms. Waldforgel, the Columbia professor, who has studied such allowances in Europe. “A child allowance protects children from swings in the economy.”

Andrew Yang’s star turn in the Democratic presidential primaries was also built on the pledge of an income guarantee — $1,000 a month for every adult.

But conservatives warn cash guarantees would erode work effort and create poverty. The academy predicted the labor effects would be small — earnings for low-wage workers would drop by less than 1 percent — but the right views such claims skeptically.

“Right now, my total concern is to make sure that people who need assistance get it,” said Robert Rector of the conservative Heritage Foundation. “But to simply send out checks in normal times would have massive labor disincentives and would be entirely counterproductive.”

The Trump administration has followed a restrictive philosophy. Three proposed food stamp rules, one finalized, would together cut the caseload of 36 million people by about 10 percent. That is partly due to expanded work requirements, like forcing more people to show they have searched for jobs.

To detractors, such work rules are “paperwork rules” — bureaucratic barriers to aid. In many states, a single missed appointment can lead to lost benefits. But the agriculture secretary, Sonny Perdue, declined to suspend the work rules this month even as the economy was collapsing. Congress has since halted the requirement during the pandemic.

Likewise, the administration has encouraged states to put work requirements on Medicaid, which covers 38 percent of American children. Ten Republican-led states have done so, but federal courts have stopped them all after a rollout in Arkansas led to widespread confusion and loss of coverage.

“The coronavirus underscores how misguided the attacks on Medicaid have been,” said Janet Currie, a Princeton economist. “We want people to have health insurance — so that the sick can get treated and so that other people can be safe, too.”

Mr. Trump has also fought to undermine the Affordable Care Act, known as Obamacare, which experts say caused the share of uninsured Americans to rise last year for the first time since the law passed.

Separately, the administration is penalizing legal immigrants for using benefits. (Undocumented immigrants are ineligible for benefits.) Under the so-called public charge rule, the government deems receipt of cash aid, food stamps, public housing or Medicaid a negative factor when legal immigrants seek permanent residence. Many of the families affected have American children.

Ms. Schanzenbach estimates that nearly 20 percent of immigrant households with food stamps will lose benefits — about 1.8 million people. “You can’t talk about the safety net today without talking about immigrants,” she said. The White House has said immigrants should not depend “on the largess of United States taxpayers.”

Just as it took the Great Depression to birth the modern welfare state, progressives hope the great pandemic will bolster efforts to fortify it, though policies like universal health, paid sick leave and child allowances.

“It is incomprehensible that we remain the only major country on earth not to guarantee health care to all,” said Senator Bernie Sanders of Vermont said last week in an interview with NPR. “People are beginning to rethink the nature of American society and the role that government plays in our life.”

Melissa Boteach of the National Women’s Law Center argues the crisis could leave a legacy of greater solidarity. “It’s exposed the myth that poor people suffer from ‘dependency,’” she said, noting that all Americans have depended heavily on low-wage workers, like grocery clerks and health aides. “It shows we’re all dependent on each other.”

But the crisis will also leave a legacy of national debt, which could impede future spending plans. Conservatives say the problem is the virus — not the free-market — and warn a government expansion will bring higher taxes and less prosperity.