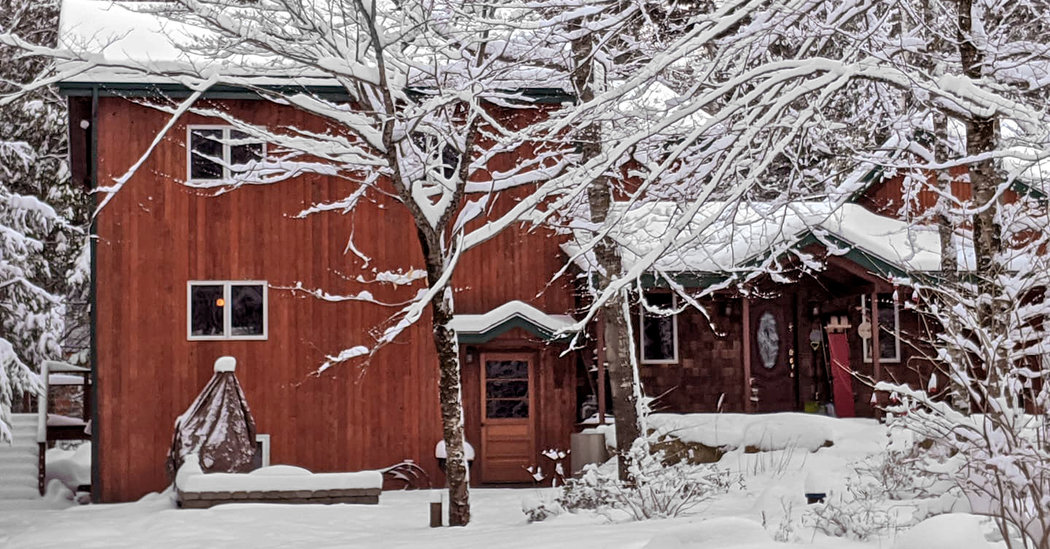 My daughter and I get in the car and head north. Just as the sun sets, we arrive at our home in the Belgrade Lakes region of Maine, eight hours after leaving New York City and Barnard College. It’s March 12, two days after the president said, “Be calm. It’s really working out. And a lot of good things are going to happen.”

There have been 987 confirmed cases of the coronavirus in the United States by this point, and 29 deaths. There are 4,613 deaths worldwide.

My wife, Deirdre, welcomes us with a hearty stew: red beans and kielbasa. We sit around a roaring fire, the three of us, plus the dog.

I think, guiltily, of Mr. Meagles in Dickens’s “Little Dorrit,” quarantined after a trip to China, who looks upon his lovely daughter, Pet, and exclaims, “It has had the result of making even quarantine enjoyable!”

The next day, my daughter’s fiancé, Ezra, arrives, having driven to our house from Virginia. And shortly after that, my brother-in-law, Uncle Todd, is dropped off too. Now there are five of us, all beneath one roof.

I am not happy to be trapped inside. But sitting by the fire, looking upon the faces of the ones I love, I am wondering how bad this could be.

I am about to find out.

St. Patrick’s Day comes and goes without anyone paying any attention. A bigger story in New England is that Tom Brady has left the Patriots, after two decades and nine Super Bowls.

That’s the same day we learn that L.L. Bean, down in Freeport, is shutting its doors for the duration.

Deirdre goes to the supermarket in Augusta. There is no fresh fish, no white sugar, no toilet paper, no hand sanitizer. The flour is almost gone. There is lots of produce, lots of alcohol. Cashiers are using hand sanitizer after every single customer. The atmosphere in the store is orderly and businesslike. All the stocking clerks are kind and helpful. No one is wearing a mask, but there are many pairs of gloves.

The whole time Deirdre is gone, the dog, Chloe, sits by the front door softly whimpering, waiting for her to return. Does the dog perceive that something strange is in the air?

When Deirdre finally comes through the door, Chloe rushes toward her like a long-lost friend. Deirdre tells the dog she is sorry but she couldn’t buy any more Milk Bones. People are hoarding those too.

I do a lot of baking. One night I make four pizzas: margherita, pepperoni, sausage with red onion, and a white pizza with ricotta and mushrooms and jalapeños. I bake bread too: six free-form boules and a pair of home-style loaves, from my beloved James Beard bread book.

One day I sit down to darn a sock. But I can’t thread the needle.

Ezra is a Ph.D. candidate in plant biology. Before coming north, he set up an experiment in the wetlands of Virginia, planting marsh grass in different conditions, to understand the effect of climate change upon it.

On Friday morning, Ezra learns that the experiment is being eaten. By raccoons.

That night, we have a cocktail-party-by-Zoom; six couples in six houses gathered around their computers for conversation. Deirdre and I are drinking negronis. Our hosts, Susan and Joe, are drinking something they call a quarantini. It is a welcome bit of revelry.

At least it is until we go around for “check-in.” One of our friends lets us know her son is quarantined in his room. The boy has tested positive.

On Tuesday, the 24th, I find the world changed by an overnight snowfall. There’s a good six inches surrounding us, and the world is mysterious and still. Later, I take a walk alone through my neighborhood. I hear the sound of water rushing over rocks beneath the snow. It is a clear, hopeful sound.

That day, there are 42,164 confirmed cases in the United States; 471 Americans have died.

The president says it’s almost time to phase out the period of isolation. “I give it two weeks,” he says. By Easter, he says, “we will be just raring to go.”

If we do this, one scientist says, “Covid would spread widely, rapidly, terribly, and could kill potentially millions in the year ahead.” So there’s that.

That evening, my daughter shaves the sides of her head. An “undercut,” she calls it. She doesn’t ask me what I think about this, which is just as well. I remember how much my own mother hated my hair, which is fairly long. “It makes you look like Ann Coulter,” she told me, knowing how this would get under my skin. “Are you happy with it?” I ask my daughter. She says she is.

Several days later, she dyes the rest of it pink. She does not look like Ann Coulter.

I wake in the middle of the night, worried and neurotic. I have asthma, which gets triggered by stress. Now, lying there in the dark, I convince myself I am symptomatic and reach for my inhaler, gasping for breath. The puffer makes a soft hiss in the black room.

I do not have the coronavirus. But worrying about it is making me crazy.

In “Little Dorrit,” Mr. Meagles laments: “I am like a sane man shut up in a mad house. I can’t stand the suspicion of the thing. I came here as well as ever I was in my life; but to suspect me of the plague is to give me the plague. And I have had it—and I have got it.”

With a smile, his friend replies, “You bear it very well, Mr. Meagles.”

At week’s end, the Trump campaign is reported to be trying to stop airing of a video of the president calling the virus a hoax, saying it’s “misleading.”

The sun sets and we gather around the table. “How’s everybody doing?” I ask. Everybody says they are OK.

I remember other times of isolation in this house, when blackouts and blizzards stranded us with one another for weeks on end, without power, without running water. During the ice storm of January 1998, we were frozen in the dark for 11 days.

The situation we are in now is profoundly different from that. But in the way we rely on one another and try so awkwardly to express the love in our hearts — this is something I have known before.

I am remembering the scene in the Coen brothers film “Buster Scruggs” in which a cowboy stands with a noose around his neck, only to have the execution interrupted by a sudden Comanche attack. Some time later, he is — incredibly — captured and sentenced again. Standing on the gallows once more, he serenely looks over at a fellow rustler who is weeping at the terrible turn of events.

How’s your family doing? Tell me your story in the comments. Wash your hands. Protect your heart.