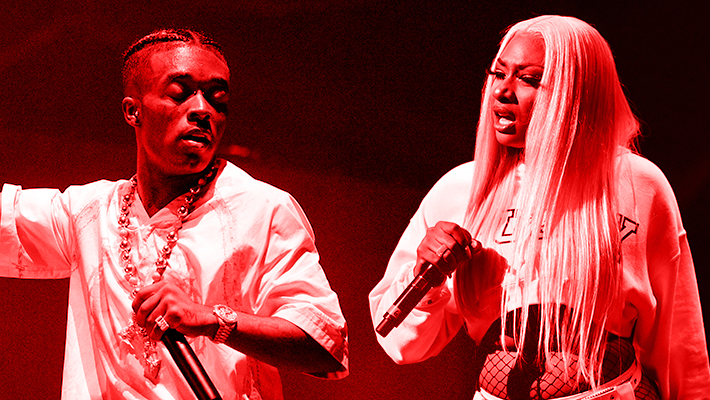 This was a difficult month, but at least there was good music — including two projects that few people actually believed were coming any time soon. Lil Uzi Vert and Jay Electronica released long-awaited albums, and both had surprises in store. Jay Electronica’s A Written Testimony featured Jay-Z, while the deluxe version of Lil Uzi Vert’s Eternal Atake was Luv Vs The World 2, an entirely new album. Elsewhere there were standout projects from young, up and coming acts like Megan Thee Stallion, Chika, and Jack Harlow, as well as strong offerings from vets like Jadakiss, Larry June, and Ransom.

On the same timeline as the long-anticipated Jay Electronica debut album, Lil Uzi Vert dropped a similarly desired Eternal Atake. Uzi rocks out over a soundscape of synth-driven 808 bangers on the 18-track album, needling through earworm melodies like “Baby Pluto” and “Silly Watch” with a nimble flow encapsulating gems like “Anthony Davis, don’t deal with the Pelicans” and “Pop’s” catchy “Givenchy” refrain.

Uzi’s style is relatively light on substance, as precocious boasts and misogyny overshadow the vulnerability of “I’m Sorry” and “Urgency“ (with Syd The Kid). But he’s heavy on technique, which he displays as the sole rapper on the entire project. He gets a bad rap as a posterchild for mumble rap. But the reality is that the Philly native is just as sound a technician as many of the rappers that purists tout. Eternal Atake shows that Uzi is just too preoccupied with melody and left-of-center production to court convention — and fans love him for it.

So many of Lil Uzi Vert’s biggest fans know nothing else but a rapidly churning media cycle. It’s likely that after listening to Eternal Atake, some of them were already clamoring for new music. That’s a pretty unfair predicament for any artist, but Uzi isn’t just any artist. True to his otherworldly nature, he hit his fans with another batch of work in the form of the 18-track LUV Vs. The World 2, the deluxe version of his Eternal Atake album.

He took fans back to his breakout project with the title, yet continued Eternal Atake’s impressive fusion of lyricism and melody — this time bringing along guests. He and Nav float over “Leaders.” Young Thug appears twice, on “Got The Guap” and the jolting “Strawberry Peels” with Gunna. LUV Vs. The World 2 was perhaps the quickest follow-up to a long-anticipated album ever, and it was well worth the pleasingly short wait.

March has been a jolt to everyone’s system. On the lighter end of the shock spectrum was a Jay Electronica solo album. Yes, you read that right. The long-mythologized MC finally delivered his debut project — and he brought along Jay-Z to boot. “My debut album featurin’ Hov, man, this is highway robbery,” he rhymed on “Ezekiel’s Wheel,” a bare-yet-mesmerizing track that typifies the album’s predominant theme of spiritual ascension.

Both Jay’s take turns digging deep and eschewing the for spiritual supremacy. Jay Electronica also answers what took him so long on several tracks, including most incisively on “Ezekiel’s Wheel” where he rhymes, “Some ask me ‘Jay, man, why come for so many years you been exempt?’ / ‘Cause familiarity don’t breed gratitude, just contempt.” That nugget is just one of many strewn throughout the 10-track project that doesn’t care to meet expectations as much as explain why such constructs are so limiting.

Megan Thee Stallion has been at the top of the news cycle for over a month as she fought Carl Crawford and his 1501 label for alleged unfair compensation. Lost in the debate about whether she’s in the right or wrong is the reality of why she’s in such a hot-button position: her immense talent. Megan is one of the rap game’s most captivating personas. The confident, sexually liberated bangers that dominated her Fever album were the fulcrum of 2019’s #HotGirlSummer.

She decided to embrace her a mellow alter-ego on Suga, a project where she tempered the high-octane bangers to show off the versatility of her skillset. There’s the breezy “B.I.T.C.H.,” where she rhymes “Why you wanna play with me? You know I’m undefeated / A real hot girl know how to keep a n**** heated,” and “Hit My Phone” with Kehlani, which both showcase her songwriting ability and a more measured delivery. She’s clarified project isn’t her debut album, but it’s another strong progression that stokes even more anticipation for her official introduction to stardom.

With album titles like Kiss The Game Goodbye, Kiss Of Death, The Last Kiss, and Top 5 Dead Or Alive, Jada played on his name and mythos. But Ignatius is an entirely different kind of commemoration. The entire project is a tribute to his late friend and Ruff Ryders A&R Ignatius “Icepick Jay” Jackson, who died in 2017. Jadakiss’ focus on celebrating his friend helped ground the album. From reflective songs like “Closure” and “Pearly Gates,” to features with artists Icepick Jay liked such as Pusha T (the sinister “Huntin Season”) and 2 Chainz (“Angels Gettin Pedicured”), the album flows with a cohesion that is seldom seen on Jadakiss albums. Ignatius one of his stronger bodies of work, and another example of a veteran MC coming through with a late-career renaissance.

There have been countless gifted lyricists who became renowned for online freestyles but were unable to hone their focus on a song, much less an album. But Chika isn’t one of those rappers. Her pinpoint lyricism and well-rounded artistry permeate Industry Games, her debut EP. “I’m about to change the world, that’s my only mission,” she rhymes on the intro track, then spends the next six songs inching toward that goal a captivating couplet at a time. Chika is a sharp MC, but she can also jump into R&B mode, as project standout “Songs About You” exhibits. The bars are there. The vocals are there. It’s all there. These days, there’s not much to do but play Industry Games on repeat and wonder how a 23-year-old can be such a complete artist.

Larry June — Adjust To The Game

Larry June offered up another helping of smooth cruising music on Adjust To The Game, a 10-track project. The Bay Area MC worked with a bevy of producers such as Cardo and Sledgren on the project, but the songs converged into one lush soundscape that feels like enjoying a sunny day — during a time when we’d all love to do that. June is the laidback narrator he always is, confident enough to tell you, “if you see me out take a picture b*tch, it’s a rare occasion” on “Organic Secrets” but vulnerable enough to admit “dark days I was by myself, them was cold times / Still lowkey traumatized but I keep a smile” on “Organic Dip.” The second you’re able to step outside in good conscience hit the streets and play Adjust To The Game.

Jack Harlow decided to split the difference of a Friday the 13th birthday by releasing Sweet Action, a seven-song EP. The project is a solid introduction to the 22-year-old Kentucky MC who many more rap fans will be getting acquainted within the near future. Sweet Action is buoyed by “What’s Poppin,” the catchy single which reached the No. 48 on the Billboard Hot 100. With blunt song titles like “I Wanna See Some Ass,” it should be no surprise that the bulk of the project is about Harlow’s conquests, but he manages to delve into his lothario nature without being outright crass.

March was a busy month for Knxwledge. The prolific producer released his 1988 beat tape as well as HX​.​PRT14_ and WT15​.​8_. HX​.​PRT14_ is a display of his soulful production tied to R&B tracks, while the latter is another intriguing mashup of his creative chops with bars. He pulls even more emotion out of G-Herbo’s heartfelt “Funk Master Flex freestyle” on “realgun_,” then gives Jay-Z’s “Song Cry” a cavernous 80’s remix with “songkry.” He even gives new pathos to Quavo’s “Big Bro” lyrics on “bigbrotro_,” making the Migos rhymer’s cool boasts sound like urgent pleas. Knxwledge once again displays his production acumen, drawing different energy from a range of beloved songs.

Nowadays, the recipe for gritty rappers like Ransom is as simple as ever: get with a dope producer and spit your ass off. The internet has evened the playing field, and there’s no need for spitters to waste bars on radio-appeasing singles or even rap choruses. One can just show off over a batch of glorious beats like Ransom did on Director’s Cut, a 4-track EP with -based producer Nicholas Craven. Ransom sticks to the script with Tarantino-like imagery such as, “fire biscuit, blood on the wall lookin’ like hieroglyphics” on “Pulp Fiction.” Craven provides Ransom with a soulful soundscape that reawakens old R&B records for murderous scribes.