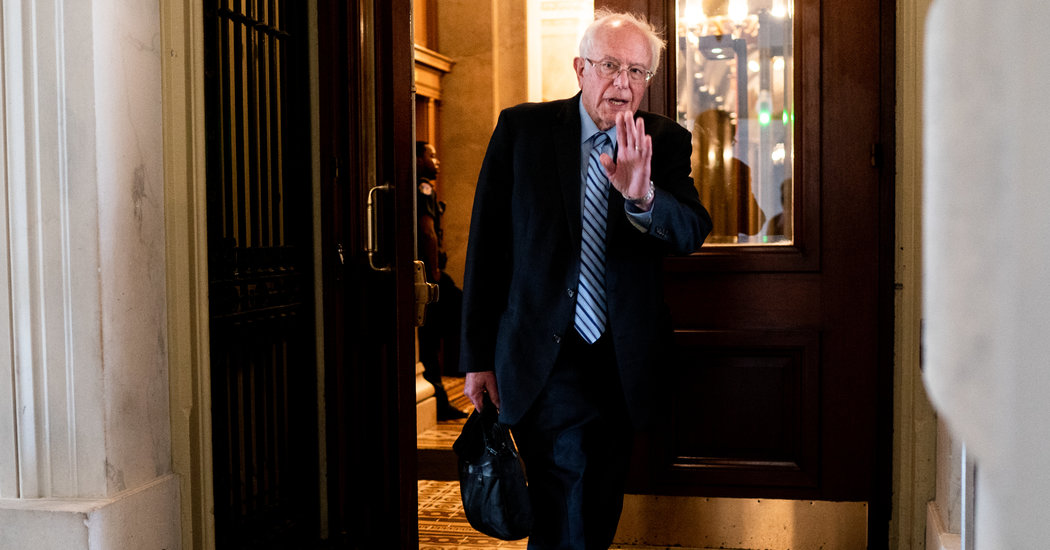 Senator Bernie Sanders this week offered his clearest articulation to date of his rationale for remaining in the Democratic presidential primary despite Joseph R. Biden Jr.’s commanding delegate lead, arguing that a “narrow path” remains for his candidacy and that it’s important for him to keep pushing his liberal agenda.

“Campaigns are an important way to maintain that fight and raise public consciousness on those issues,” Mr. Sanders said in an interview on NBC’s “Late Night with Seth Meyers” that aired early Tuesday. He ticked through a list of his policy priorities including “Medicare for all,” raising the minimum wage, combating climate change and expanding paid family and medical leave. “So that’s I think one of the arguments for going forward.”

Mr. Sanders, of Vermont, has faced growing calls to exit the race from some Democrats who want to quickly unify the party against President Trump. Mr. Biden himself has generally sought to avoid pressuring Mr. Sanders, aware that he will need support from the senator’s dedicated backers should he become the nominee, though he has also flashed signs of impatience with Mr. Sanders’s hopes to continue debating.

Amid the coronavirus crisis, both men have been forced off the physical campaign trail, and are instead offering virtual outreach. Mr. Sanders spent Monday night conducting a live-streamed town hall focused on the virus, where he lashed Mr. Trump’s stewardship of the crisis and urged the government to do more to help working people who are facing both economic and health challenges.

In the television interview, Mr. Sanders also acknowledged his delegate deficit coming off a month in which Mr. Biden swept many large states, before the coronavirus crisis ground campaigning to a halt, leading a number of states to delay their primary contests.

“We’re about 300 delegates behind; Biden has 1200, we have 900,” Mr. Sanders said. “There is a path. It is admittedly a narrow path. But I would tell you, Seth, that there are a lot of people who are supporting me. We have a strong grass-roots movement who believe that we have got to stay in, in order to continue the fight.”

Mr. Sanders also argued that the outbreak of the coronavirus crystallized the need for his sweeping single-payer health care proposal, “Medicare for all.” He said the crisis highlighted how vulnerable many Americans were without insurance and showed how the current public health system is “so weak, so incredibly weak,” that doctors and nurses don’t have access to basic protective equipment.

“A ‘Medicare for all’ system is designed to provide quality care for all,” he said. “To do preventative work in order to prepare for some types of pandemics, not simply to make huge amounts of money for the insurance companies and the drug companies.”