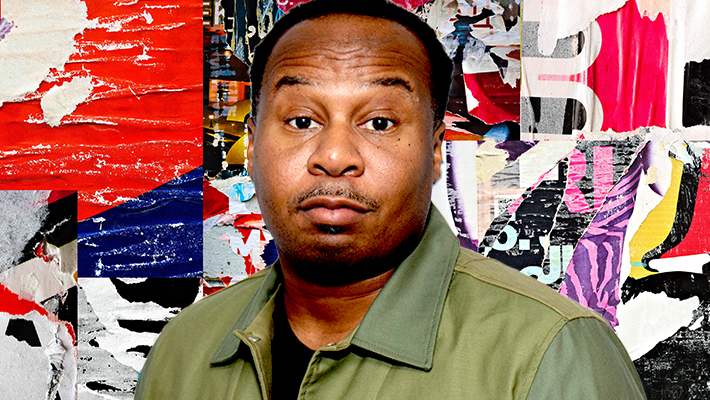 As a part of the comedic response that has kicked into high gear over the last two weeks, Roy Wood Jr. has found a battle plan during the Coronavirus quarantine. He’s making people laugh while keeping them informed as a part of The Daily Show‘s Social Distancing episodes, he’s keeping his 3-year-old engaged, and he’s writing.

To be sure, Wood’s apocalypse game is tight. But while you can’t do exactly what he’s doing, the comic’s battleplan is useful — specifically in how he’s clinging to the normal parts of life and striving to not just do, but do good and be productive. Uproxx spoke with Wood about those efforts late last week, delving into how The Daily Show is putting the message above emotion, the need to move past anger, and what he’s doing to help the comedy community.

I’ve got a dog and two roommates that are kind of hovering around so I’m just trying to rock the mute button if I need to. It’s become an art form.

I apologize in advance for my son. He is three. They are loud.

How are you doing with everything?

Really good so far, really good. It’s been chill so far. Surprisingly, in a weird way, as busy. It’s just a different type of busy. I’m trying to fill the time writing a little bit, and not stand-up, but just more TV and film ideas that I have, and just still brainstorming a shit ton of Daily Show stuff. Just figuring out what’s there. I think we’re still getting our feet under us and figuring out the workflow of the day. And then figuring out what we can and can’t get away with and what’s the turn time, because the thing that sucks now, the thing that’s more difficult to navigate, is that I think we went from a 12-hour news cycle, to now, with Corona, I feel like we’re literally in a six-hour to eight-hour news cycle. Every six to eight hours, there’s new information that makes whatever you knew this morning irrelevant.

Right now, the thing that I’m dealing with is a lot of outrage. It’s a lot of fear and a lot of anger, and I’m wondering: how do you process the anger and the outrage over some of the government’s response and is the show and your social helpful or a release valve for you?

I like what we’re doing right now with our show because it gives people something to do other than be angry. We’ve given people ways to help. You know, hey stay home. Hey, if you want to donate supplies, go here. Hey just to track, here’s how you can be part of contributing to the betterment of things. For me, I’ve never seen anger be a useful emotion when it comes to being productive. So, be angry. There’s nothing wrong with being angry. But when you get past that, now what’re you going to do? What’s your next move going to be? What actions are you going to take? And more than anything that’s what we can turn to. That’s what we’ve been trying to work on.

Yeah. I think a really good example of that is Trevor’s interview with Dr. Fauci. Because Trevor was able to address the issue of Trump talking about miracle drugs without necessarily dunking on Trump, which I think may have been unproductive considering who the guest was. He put the message ahead of the emotion. Which is important considering your audience: younger people that have, in some cases, lagged behind when it comes to taking this seriously. Would you agree that you guys have put the message ahead of the emotion?

Yeah. It’s on my Twitter page, it’s under a thread where I was kind of, I was complaining about the way the press conferences have gone with Trump, and how I hate the fact that he avoids questions. I proposed that if Trump avoids the question in the press conference, then the next reporter should ask that question, and then the next and the next. And a journalism professor from NYU, he said something that I agreed with, which is essentially that if the media’s in there just being mad and angry then no one gets any information, and ultimately a journalist’s job is to give information to the people that need it. That might be the more productive mission than just trying to dunk on Trump. Yeah, you dunked on him, but did you help the country? Because after Trump is out of office, whenever it is, people are still going to need help. That’s never going to change. So why not focus on that first and then if you have a little time left over you can dunk on Trump.

Was there ever a thought that you guys wouldn’t do anything from home?

We were always going to do something from home. Trevor’s young and savvy with the internet. What we’re doing now with this full-blown social distancing show, it evolved to that. And it was just, “alright what can we do? What can you talk about? What bits can you get on? Trevor should talk with the correspondents, let’s just try to continue to make sense of all this.” And as weird as it feels to do this, oddly it’s still normal because the entire world is weird now. Until America opens up again, there are no rules on what’s the most effective way to be a political satirist with a webcam. The goals remain the same: you want to give people valuable information, and you also want to try and make them laugh a little bit in the process. And so, the first week went well. When Viacom opted to shut down the studio altogether, and sent us home, forced us to quarantine, the initial idea was yeah we’ll do a couple of things this week and then, “Oh, that went really well. You know what? We should put this on TV.” Trevor’s got a great camera as well. That also helps.

We have a producer who is pregnant, and she was going in for one of her checkups and she asked if we could interview one of the doctors about what’s happening with the masks and the medical equipment. And we managed to turn that into a two-sided interview where I’m basically talking to her through Skype. So there’s still a way to do things and reach people and I think it’s very important for us to continue to try to do that. We’re finding stories and finding things and people that are being affected by this. The weird, odd stuff. The weird side effects of a self-quarantine. Things that you wouldn’t consider that would flourish. The fact that Pornhub’s site crashed a couple of times. Netflix as well. Netflix, they had server issues a couple of days ago. So, that’s funny, light-hearted stuff. You’re able to still inform people about doom and gloom but you’re able to get through it with some humor.

Is the show and the normalcy of the process also helpful for you to deal with this? How are you handling things, like, emotionally? You’ve got a kid. You’re in New York City.

It’s fine right now. You know, I’m most concerned about my mom in Alabama. She’s an administrator of a college, and so they’ve been working to digitize the curriculum. She still has to go to the campus to make sure that the students are taken care of. I’m probably two weeks, two and a half weeks, into this myself, and the one thing that’s odd, that’s oddly comforting is that as a comedian, because I’ve done so many road gigs where I am alone, being alone isn’t that much of an adjustment. It’s just about wondering what the show will be and what the comedy club industry will be on the backside of this. I’m in a better situation than most comedians right now, so I have the luxury of not being able to worry yet.

There’s going to be some ripple effects. Right now, I just keep myself busy writing scripts and trying to create content when I’m not doing stuff for work because there will always be a need for entertainment. This isn’t going to kill entertainment. You look at previous pandemics where millions died, on the other side of that, there were still movies or whatever the entertainment was of that era. It came back. So in the long run, we’ll be okay. The biggest thing I have to deal with is trying to make sure that my damn son is engaged intellectually at all times and not just goofing off.

Can you talk a little about what you did with TipYourWaitstaff and a little bit more about why that’s important?

Yeah, so Mike Birbiglia, that’s his brainchild. Me, Birbiglia, and John Mulaney were just trying to figure out a way to do something for all of the comedy club staff that we know, and have worked with for decades now ourselves… but figure out a way to do something nice for them before all of this federal assistance kicks in for everybody. Because who knows how long it’s going to take for checks to be distributed. But basically, TipYourWaitStaff.com is just two comedians working out new jokes with each other and then in exchange, he hopes that people will donate money to one of the comedy clubs that we nominated on the website. You know, I think it’s an opportunity for the general public to see how comedians create the jokes that they get to laugh at, and a lot of the shit, it’s just brainstorming.

It’s just watching two guys brainstorm, I think if you’re a comedy fan, it’s a very interesting process of showing how the sausage is made. I had fun doing it. I had a blast doing the one I did with Mike so I did it again with Ali Siddiq and I nominated my club in Birmingham. I nominated another club in Huntsville, Alabama. Sarah Silverman just did one, Mulaney did one with Birbiglia and a couple of other names I’m forgetting right now. But it’s been fun. It’s been fun to do and it keeps me close to the stage psychologically because right now I’m not really writing a lot of new material because I just don’t know tonally what type of world I’m going to be stepping back out into, when comedy clubs do open.

Are digital shows and things along those lines like Instagram Live comedy sets something you want to do or is the disconnect from the live audience response too much of a hindrance to doing something like that?

I’m not completely sold on my ability for my comedy to connect without an audience. There are some comedians that are able to do it. Good for them. That’s never been the first idea to come to mind for me. I’ve seen some of it. Mark Normand did one that I thought was really funny where he’s just outside, performing for people on the sidewalk, but he maintains social distance.

Yeah, I saw that one. It was good.

That made me laugh, but I don’t know how I would do it. For me, it feels really weird.

Yeah. I imagine without the response to know if something’s working and without the rhythm of an audience, I would imagine it would be really hard.

Yeah. So I’ll just do what I’ve always done. If something seems funny, I’ll jot it down and when I have the opportunity months from now, I’ll put it on stage and I’ll let new-joke-night at the Comedy Cellar be the discerner.

You can see Roy Wood Jr. on ‘The Daily (Social Distancing) Show’ on Comedy Central weeknights at 11pm ET and on Twitter @RoyWoodJr