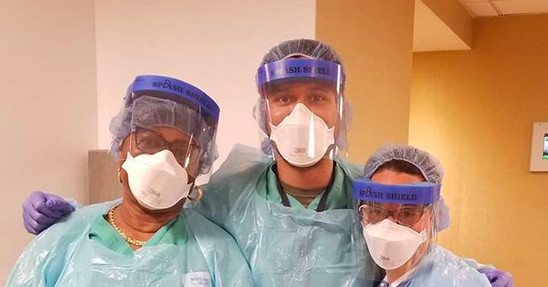 Ex-UFC fighter Phillipe Nover fought plenty of battles during his mixed martial arts career, but no opponent was as terrifying as the virus he’s currently watch tear through the population in New York City on a daily basis.

The 36-year-old former Ultimate Fighter contestant has been a registered nurse in New York for several years where he works as part of a team in the Cath Lab, which is focused on cardiology.

Lately, however, Nover has been crossing over to work in the emergency rooms and intensive care units, which are being bombarded with more and more patients every day who are contracting the deadly coronavirus.

“Things just kind of turned upside down in a matter of days and weeks,” Nover explained when speaking to MMA Fighting. “I’d say New York City was quite ill prepared. Especially as you can see with the personal protective equipment (PPE), which is the masks, gowns, the N95 masks. Initially, there was a lot of issues providing enough for the medical staff. Having enough tests, which only in the last week I would say, we were actually able to test within the hospital.

“I mean this pandemic is spreading so rapidly and there was only one hospital in Long Island, N.Y. that was able to actually test in the hospital. It took three days even to get the results and that was as of a week or 10 days ago. Now we’re moving quick where we’re testing people, but we still don’t have enough tests.”

According to Nover, the shortage of tests has been the biggest issue when treating patients who are likely infected by COVID-19.

As of Monday, New York City reported over 38,000 cases of COVID-19 with more than 900 deaths caused by the virus. Nover says those numbers probably aren’t even remotely close to accurate considering what he’s seeing happen in his hospital everyday.

“We’re not even giving tests to everyone,” Nover said. “You literally have to be critical and have a lot of symptoms to be tested. There’s an influx of patients.

“Our emergency rooms are maxed out most of the time at 80 to 100 percent. Our ICU’s (intensive care unit) is maxed out. Those are the two areas of the hospitals where all medical personnel are directed towards.”

I’ve seen such horrific stuff when it comes to COVID-19. Patients dying in front of me, gasping for air.

On top of the huge number of COVID-19 patients, the New York City hospitals are also dealing with the regular healthcare emergencies that happen in a city with a population more than 8.6 million people

“Last week, I had a patient who had a legitimate heart attack, we went in and put a stent in and there’s no ICU bed,” Nover revealed. “The ICU units are full of COVID-19 patients. On top of that, I wouldn’t really want my relative to be in an ICU after just having a heart attack being next to a patient who has COVID-19 and it’s spreading like wildfire.

“There’s a cross contamination issue. It’s a mess in New York. It’s quickly spreading and it’s manageable, but at some point, it won’t be manageable unless these numbers come down.”

Because Nover doesn’t typically work around infectious diseases as part of the cardiology team, he admits a wave of fear washed over him when the coronavirus first started spreading across New York.

As scared as he might have been, he had to learn to swallow it down and get back to work because he knew people were counting on him. Now as every shift begins when he’s working around COVID-19 patients, Nover is putting on an N95 mask with another mask over top of that, two pairs of gloves, covers for his shoes, a sterile gown, a head piece and eye shield in order to protect himself.

“As healthcare professionals in any environment within in the hospital, we’re what society counts on,” Nover said. “We have to provide healthcare to the community. So when it comes down to risking ourselves, we do it everyday.

“I do see co-workers and friends, who have contracted the virus. My immediate co-workers, no one is in critical condition at this point. I’ve seen some nurses that got bad but not to the point of getting intubated. As far as putting myself on the line, I thought about it initially but I said sign me up. I got into healthcare to help people and this really is what our calling should be.”

While Nover’s only focus right now is serving the patients in his hospital, he’s usually an active participant at his local gym where he trains Brazilian jiu-jitsu alongside many friends and teammates.

Lately that hasn’t even been a choice for him because Nover understands after being around highly infectious patients, it would be irresponsible of him to potentially pass along the disease to more people.

Of course, Nover understands that there are still fighters out there training everyday and he’s seen UFC president Dana White announce that he plans on promoting cards again starting with the upcoming show on April 18.

White has said that the UFC is taking every possible precaution when it comes to the health and safety of the athletes. All of the fighters currently scheduled to compete at UFC 249 have said they still want to perform, regardless of the ongoing pandemic.

Because he spent a lot of years dedicating himself to MMA, Nover understands the need that drives the fighters, and he can’t fault them for it. That said, he also knows the harsh reality facing the world when it comes to the coronavirus outbreak continuing to spread across the population.

“I guess I’m biased towards the healthcare situation,” Nover said. “I don’t blame any of the fighters. I still have plenty of friends who are training. I can’t do that. I’m probably carrying this sh*t. But it’s going to happen. This is their craft. This is what they do. This is the worst possible thing to happen to MMA guys and jiu-jitsu guys cause we’re literally on top of each other, soaking in each other’s sweat. We have outbreaks of staph and other things all the time.

“This is so easily transmissible. So when it comes to a virus like this, I don’t blame them. If I was younger like when I was 24, and first in the UFC, I would probably be training, too. But at this point I’m a lot more mature and I’m thinking about other things in my life. I see the UFC for what it is. They’re a corporate company. They have to put shows up by any means necessary.”

The real threat in allowing fights to continue as scheduled isn’t the risk that any of the athletes will become deathly ill from COVID-19. As Nover explains, the danger comes later when those fighters or the staff who work the event go home and pass along the virus to more vulnerable people who don’t have the immune system to recover.

“The chances of these young, healthy athletes getting sick is pretty low,” Nover said. “The MMA world is a lot of young studs, who pretty much think they’ll never die. It’s a high risk population. They’ll probably just self-quarantine for two weeks but the big risk is them contracting it, being a carrier, and then spreading it to people who aren’t young athletes.

“How about their parents? How about people around them? It’s a very tricky topic. I haven’t even visited my parents. I could visit them but I chose not to. I told them just to stay home. It’s just too much. And with the stuff I’ve seen in the hospital, I’ve seen such horrific stuff when it comes to COVID-19. Patients dying in front of me, gasping for air. It’s not a sight that I want to see anymore and I think just quarantining and staying home would be helpful.”

“I don’t blame any of the fighters. I still have plenty of friends who are training. I can’t do that. I’m probably carrying this sh*t.”

Ultimately, Nover knows the UFC is going to do whatever is best for them but he can only speak as a former fighter and current healthcare professional when he says following the current rules to slow the spread of the virus is the best possible practice.

He recommends social distancing, washing your hands, keeping the numbers of people in groups as low as possible but more than anything Nover believes there’s one thing that will finally bring this pandemic to an end.

“The No. 1 thing to overcome this virus is going to be testing,” Nover explained. “There are still not enough tests being produced. We are told as healthcare workers, we’re not even testing. Cause we’ve got to ration our tests.

“So if a patient comes in and they’ve got all these symptoms, they have a temperature, they have trouble breathing but it’s manageable and their fever came down with Tylenol, body aches and we break the temperature in the hospital, we tell them you’ve probably got it but we’re not going to waste a test on you so go home. That’s what’s happening now. Until we have hundreds of thousands of tests for the mass population, the virus will probably continue to spread. This thing really hit us like a sucker punch. We were very ill prepared.”

If testing is the answer, Nover suggests that might be the best solution for the UFC as well.

“Maybe Dana White can throw a show if he gets 250 tests and tests everyone and they’re all negative,” Nover said. “And then they can all have a show.”