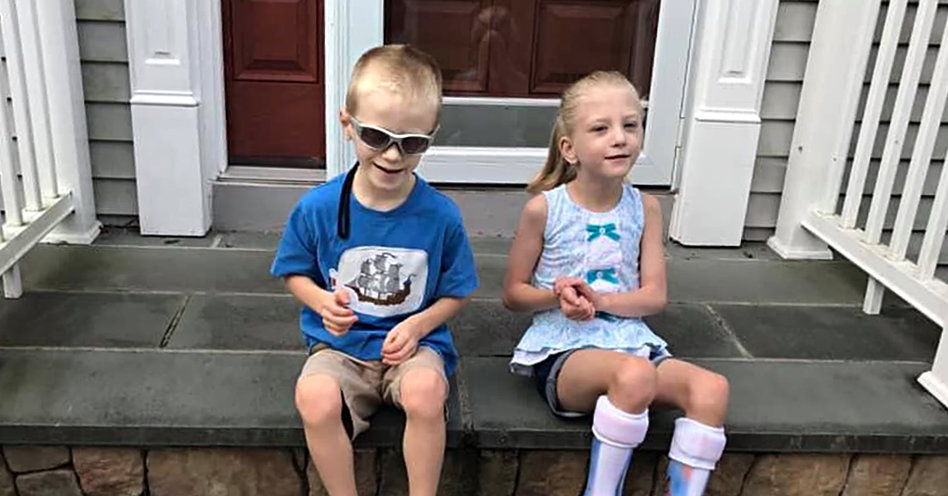 As coronavirus continues to spread across the globe, we’re working to answer the questions on many parents’ minds. This is a fast-moving situation, so some information may be outdated. For the latest updates, read The New York Times’s live coronavirus coverage here.

During the second week of March, Hope Pardee, a teacher for visually impaired children in Connecticut, developed what she and her physician suspected were classic symptoms of infection with the new coronavirus — sore throat, dry cough, headache and a high fever. But as soon as she recovered, Pardee faced another daunting prospect: home schooling her 6-year-old twins.

At-home learning can be intimidating for any parent, but for Pardee, 47, it has been particularly demanding. Her twins, who were born premature, have developmental delays and are visually impaired. Both are enrolled in a kindergarten for kids with special needs, and have learning plans that are individually and expertly tailored to them.

“At school, they’re educated in this extremely cloistered environment where they have a higher staff-to-student ratio than we can provide at home,” Pardee said. On a typical day, for instance, her twins have access to special education instructors, behaviorists, social workers, and occupational, physical and speech therapists, “none of whom are going to be coming to our home anytime in the foreseeable future,” she continued. “It’s really frightening to us.”

For most parents and teachers across the United States, school closures as a result of the new coronavirus have left them grappling with their new realities: Parents must suddenly add “schoolteacher” to their burgeoning list of duties, and teachers and school districts must jump through regulatory and technological hoops to facilitate learning online.

But for the millions of students in the United States who are living with disabilities — including those with autism, intellectual disabilities, developmental delays and more — this task has proved especially challenging. Parents and teachers of students with special needs have reported feeling overwhelmed, with little to no initial instruction on how to proceed once schools shut down.

“We got sent home on Friday, March 13, with a packet of stuff, and that was it,” said Alyse Biro, a stay-at-home mom in Crown Point, Ind., whose 4-year-old daughter has Down syndrome and attends a preschool for kids with special needs. Her school district has since said that it would provide additional services beginning in mid-April, but it is unclear what those services will be, and whether they will include the weekly physical, occupational and speech therapy her daughter typically receives.

In March, the U.S. Department of Education said that all public schools that were providing virtual or online education during the pandemic must continue to serve their students with disabilities, even if they felt that the education would be inadequate. The department acknowledged, however, that some special-needs services would be too challenging for schools to provide. In-person physical therapy, for instance, is now nearly impossible for students who are self-isolating, so schools may instead offer virtual or phone consultations.

“No student, not even a non-disabled one, is going to get the education that they are supposed to get right now,” said Ricki Sabia, a lawyer and a senior education policy adviser for the National Down Syndrome Congress, a nonprofit that educates people about (and provides support for) those with Down syndrome. However, she added, school districts must still do their best to make distance learning accessible to all students with disabilities.

Joan Fanwick, a special-education teacher in Philadelphia, said that she’s found it challenging to maintain her students’ privacy while offering virtual instruction. Many school districts, including her own, are using web-based instruction tools that allow teachers to post assignments and communicate with their students in virtual “classrooms.” But because the learning levels of kids with special needs can vary in a given class, it’s challenging to keep their individual assignments private within a public “classroom.”

“I just feel uncomfortable with parents seeing what other students in the class are working on,” Fanwick explained. As a result, she had to find another platform that would give her more control over who could see what.

How to make your time at home work

If your child has special needs and is transitioning to online learning, try to be patient with her instructors or therapists at first, as it may take them several weeks to work out some logistical and technological kinks, said Selene Almazan, a special education lawyer in Towson, Md., and legal director of the Council of Parent Attorneys and Advocates, an independent national association that protects the legal and civil rights of students with disabilities.

After that, make sure you have some sort of remote education and therapy plan in place. If you don’t, speak to your school’s principal, as well as whomever is in charge of special-education services in your school district.

You’re still legally entitled to any upcoming planning and placement team meetings — which can determine whether your child is still eligible for special-education services, for example. You are also entitled to the annual individualized education plan meeting, where you and your child’s special-education team discuss your child’s new academic goals for the year, as well as the additional supports and services needed to meet them. But these meetings will now need to happen virtually, instead of in person.

It’s also helpful to track the type and frequency of special-needs services your district is offering your child during this time. While most students won’t receive the full suite of educational support and therapy services they usually receive each day, they will still be entitled to some type of compensatory education once schools reopen, Almazan said. That may mean additional time in summer school, or extra therapy sessions to make up for missed ones. So if your child typically gets 45 minutes of in-person speech therapy each day, but now is receiving only three, 20-minute virtual speech sessions each week, for instance, take note of that.

You should also track how well your child is progressing — or regressing — academically during her time at home. Your child’s individualized education plan should contain specific details about her academic skills and education level — like how quickly she can read and at what grade level. If she isn’t making progress from that, or even if she is backsliding, you’ll have a stronger case for more services and supports once school has resumed, Almazan said.

In the meantime, parent — and teach — your child as best as you can. “It’s a good idea to try to follow a schedule that’s as similar to your child’s regular school day as much as possible, to give them a sense of normalcy,” advised Richard Gallagher, Ph.D., an associate professor in the department of child and adolescent psychiatry at N.Y.U. Langone Health in New York City.

This is important for all kids, but especially for those with developmental disabilities, who thrive on structure and routine, he said. If your child typically starts his day with a morning meeting, followed by reading and then speech therapy, for example, stick to that itinerary as much as possible (while also making sure to follow his usual sleep, wake, meal and snack times). Ideally, your child’s special-education providers can offer their services during the time you have set up for your child’s learning. If they can’t, ask them for specific activities or lesson plans that you can follow on your own.

Pay attention to your own needs, too

Of course, following the school day to the letter is going to be unrealistic for most parents, who have work and other children to care for. Katie Flynn, a mother of three in Fairfield, Conn., initially planned to have her 4-year-old twin boys follow the same daily schedule as the one at their special-education preschool. But she quickly revised her expectations. “I feel like preschool-aged kids just don’t get much out of telelearning,” she said. “They get so much more out of a play-based environment.”

From when they wake up until 10:30 a.m., her twins do independent play while Flynn works with their 7-year-old brother (who doesn’t have special needs) on his assignments. “I’m with the twins for the rest of the morning, trying to do as much with them as quickly as I can,” she said, adding that she’s focused now on speech, as well as the self-help skills they will need next year for kindergarten, such as zipping coats or tying shoes.

And while it may seem unfathomable to tend to your own needs during this tumultuous period, it’s essential that you do so, said Kelly Powell, Ph.D., a pediatric psychologist and an assistant professor at the Child Study Center at the Yale School of Medicine. “Parents need to get a handle on their stress before they start trying to teach their children,” she said.

You might see if your local disability organization — or even the special-education branch of your school P.T.A., if it has one — has virtual support groups or talks that can help you through. And keep in mind that while it can be helpful to seek support from other parents of kids with special needs on social media, it can also backfire. “You don’t need to see other parents posting pictures of their children sitting happily doing schoolwork or other activities that are just really unattainable for you,” Dr. Powell said.

For now, Pardee and her husband are taking learning one day at a time, relying on daily video and phone consultations with their twins’ special-education teachers and therapists. (Which, according to Pardee, are still challenging and aren’t “the same for my kids as having a living, breathing person in front of them.”) But, she has made peace with the fact that, at least for now, there’s no way to provide her twins with the same level of services as they have at school. “We’re just focused on getting through this,” she said, “and we’ll catch our breath and refocus once we’re out.”

Hallie Levine is a health and science journalist and a mother of three.