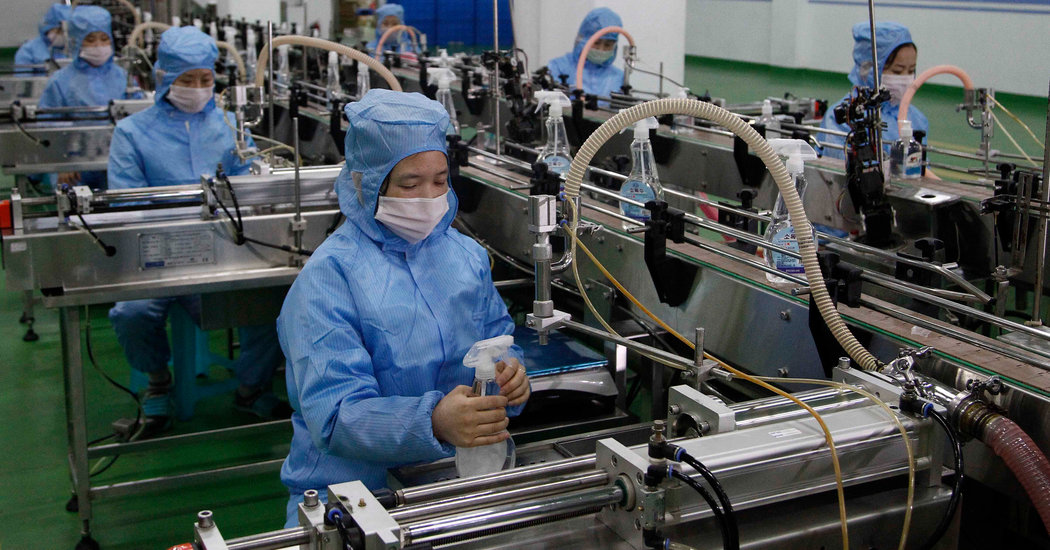 SEOUL, South Korea — Shin Dong-yun, ​a scientist from the North Korean Institute of Virology, ​rushed to the northwestern border with China in early February. There, he conducted 300 tests, skipping meals to assess ​a stream of people ​so that “the country is protected from the invasion of the novel coronavirus.”

Stories like this, carried in the state-run newspaper Rodong Sinmun, focus attention on one of the stranger oddities surrounding the Covid-19​ pandemic​: How could North Korea claim to not have a single coronavirus case while countries ​around the world stagger under the exploding epidemic?

​North Korea has taken some of the most drastic actions against the virus and did so sooner than most other nations. It sealed its borders in late January, shutting off business with neighboring China, which accounts for nine-tenths of its external trade. It clamped down on the smugglers who keep its thriving unofficial markets functioning. It quarantined all diplomats in Pyongyang for a month. ​The totalitarian state’s singular ability to control the movement of people​ also bolsters its disease-control efforts.

But decades of isolation and international sanctions have ravaged​ North Korea’s public health system, raising fears that ​it lacks the medical supplies to fight an outbreak, which many fear has already occurred.

“You can see immediately what’s going to happen if you get a surge of Covid-19 patients streaming in,” said Dr. Kee B. Park, ​a ​lecturer at Harvard Medical School who has worked alongside North Korean doctors to help improve the country’s health system. “It will overwhelm the system very quickly.”

Many observers of North Korea doubt its claims of not having any coronavirus cases. But a lack of testing ​equipment ​​may mean it literally has not detected a single case​, Dr. Park said​.

​”​It’s because they may have cases but they just don’t know how to detect it,” he said. “So they can say, ‘We have not confirmed it​.’”

Some accuse North Korea of hiding an outbreak​ to preserve order.

“It’s a blatant lie when they say they have no cases,” said Seo Jae-pyoung, secretary-general of the Seoul-based Association of North Korean Defectors, who said he heard from his North Korean contact that a family of three and an elderly couple died of the virus in the east coast city of Chongjin in mid-March. “The last thing ​the North wants is ​a ​social chaos ​that may erupt ​when North Koreans realize that people are ​dying of an epidemic with no cure​.”

The North’s leader, Kim Jong-un, is clearly aware of the threat the virus poses to his country​’s decrepit health system. Around when Washington announced on Feb. 13 that it would allow coronavirus-related ​humanitarian shipments​, North Korea made a rare request for urgent help from relief groups, including diagnostic kits, according to people familiar with the matter.

​In recent weeks, the North’s official media outlets have ​carried alarming reports detailing the coronavirus’s toll around the world: a snowballing caseload in South Korea; bodies piling up in Italy; “panicked citizens” hoarding “guns and ammunition”​ in the United States.

They contrast such reports with pictures of North Korean disease-control officials in full protective gear spraying disinfectant in buses, trams, playgrounds and hotel gyms in Pyongyang, the showcase capital city. Garment factories are shown making masks instead of clothes. There is a national drive to send eggs, meat and fish to those under quarantine.

By its own account, North Korea has quarantined 10,000 people. International disease-control officials “have all been amazed” how North Korea could have done it, the state-run Rodong newspaper said this month.

But video clips shot in Hyesan, a town on the North’s central border with China, in February and early March depict a far less flattering picture of the North’s disease-control efforts.

A red wooden marker on a sidewalk covered with a dirty slush of ice said “disinfection station,” according to a clip, which was ​smuggled to the Rev. Kim Seung-eun, a human-rights activist in South Korea and viewed by The New York Times. A lone official in a green plastic suit with a tank of disinfecting liquid on his back stood idly. A sliver van raced through the town blaring the importance of wearing masks. In another clip, the sign “Quarantined” was stuck on the door of what looked like a tenement house where Reverend Kim said people with possible ​symptoms were kept.

Reverend Kim said ​one of his North Korean contacts ​had been unable to return home for a month after visiting ​another town because the government​ controlled internal movement. Such restrictions were needed for disease control because of North Korea’s crowded public transportation network.

The country’s information blackout and the inability of outside health experts to get into the country leaves the rest of the world largely in the dark about how North Korea is coping with the virus.

Last month, Daily NK, a Seoul-based website ​that ​hires anonymous informants inside ​the ​​North, reported the deaths of 200 soldiers, as well as 23 others, who were suspected of contracting the coronavirus. B​ut ​Kang Mi-jin, a North Korean defector-turned journalist in Seoul, said that no matter how hard they searched, her contacts in ​the ​North could not find a death officially ascribed to the coronavirus.

In the past, the country has hushed or played down epidemics, military rebellions, man-made disasters or anything else that could ​undermine the people’s faith in the government.

​But this time, the North’s unusually aggressive moves​, as well as its unique ability to detain people, may have prevented a devastating outbreak​, said Jung Gwang-il, a North Korean defector who leads No Chain, a North Korean human rights activist group in Seoul​. As soon as an outbreak was ​reported in China, North Korea rounded up ​all ​Chinese visitors in its northeastern town of Rason ​and quarantine​d​ them ​on an island for a month, Mr. Jung said.

“It’s safe to say that there are cases in North Korea but I don’t think the outbreak there is as large as the ones we have seen in South Korea, Italy and the U.S.,” said Ahn Kyung-su, the head of the Seoul-based Research Center of DPRK Health and Welfare, which monitors the North’s health system. “North Koreans are trained to obey government orders in a shipshape way during crises. But there is the risk of the virus running out of control if it starts spreading among its malnourished people.”

Mr. Ahn said testing kits from China were available in big cities like Pyongyang. Telltale evidence came when Kim Jong-un inspected a missile test this month and military officers surrounding him did not wear masks, which Mr. Ahn said would not have happened had they not tested negative.

But the coronavirus has put Mr. Kim between a rock and a hard place, analysts say.

On March 17, ​he broke ground on a modern ​“Pyongyang General Hospital​” to be completed by October. But such projects in the North rely​ on mass mobilization​s​ of soldiers who ​sleep and eat together for months at a stretch​, and raise the risk of mass infections during an epidemic.

​By this month, some help began reaching North Korea in its efforts to confront the virus. Russia donated 1,500 test kits​​. China is also believed to have sent diagnostic tools​. The United Nations has ​​​​begun waiving sanctions for aid groups like​ the Red Cross to ship testing machines and diagnostic kits, as well as ventilators and protective equipment. But the shipments have been slow.

​“Given the global shortage of supplies and items being available in different locations, we are still in the process of procuring the items,” said Ellie Van Baaren, a Red Cross spokeswoman.