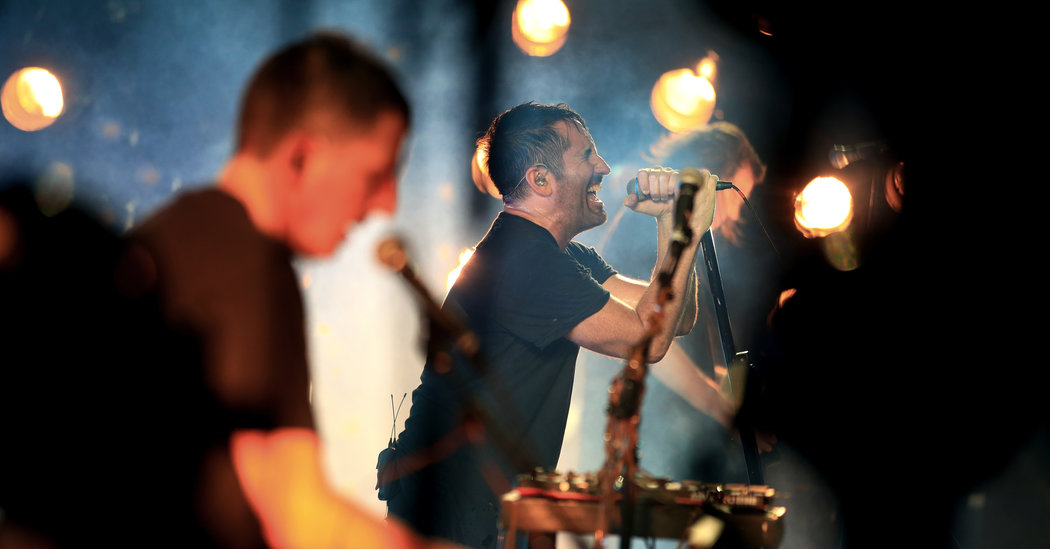 Timing may not be everything, but it’s a lot. Last Thursday, Nine Inch Nails — which currently means Trent Reznor and his partner in film scoring, Atticus Ross — released a pair of albums free online: “Ghosts V: Together,” and “Ghosts VI: Locusts.”

They’re collections of music without words, numbered as sequels to “Ghosts I-IV,” the album Nine Inch Nails released in 2008. The new “Ghosts” albums set out to address what Reznor and Ross describe in a statement as “Weird times indeed. As the news seems to turn ever more grim by the hour, we’ve found ourselves vacillating wildly between feeling like there may be hope at times to utter despair.”

The two albums push toward each polarity. “Ghosts V: Together” is largely meditative, circling through melodic patterns and touching down in consonance. The music is not entirely soothing — Nine Inch Nails doesn’t exactly do soothing — but it hints at some possibility of confluence, stability and eventual resolution. But “Ghosts VI: Locusts” offers no such sanctuary. It is harrowing from end to end, stoked with rhythmic tension, dissonance and amorphous noise: a soundscape of impending collapse and inexorable entropy.

Of course, these are not new elements for Nine Inch Nails. Reznor has juxtaposed melody and abrasion, structure and deterioration, since he released the first Nine Inch Nails album in 1989. There’s even stronger continuity between the new “Ghosts” albums and the film scores Reznor has lately been making with Ross — particularly “Gone Girl,” “Bird Box” and parts of “Watchmen.” Reznor has long been one of the most psychologically acute composer-producers; in both songs and instrumentals, his fanatically detailed arrangements map shifting emotional territory as well as musical foundations.

Reznor and Ross revisit some of their most distinctive sonic vocabulary on the new albums. There are piano notes that seem to echo across ruined spaces; sustained electronic tones that curdle aggressively into distortion; dense but distant orchestral thickets; “instruments” with an acoustic core that have been so heavily manipulated that they are no longer recognizable as physical sources.

Both in Nine Inch Nails songs and in film music, Reznor has always sculpted sounds that are suitable for suspense and horror scenarios, and right now, those sounds can feel very much of the moment. The piano notes toll in hollow isolation; the distortion can swell as suddenly and unpredictably as an infection. And those orchestral hazes hover like an impending outbreak.

On the two “Ghosts” albums, Nine Inch Nails allows itself a rare luxury: duration. The album tracks aren’t confined to song forms or to the limitations and external expectations of soundtrack music cues. They can, and do, stretch to 10, 11, even 13 minutes. (After all, self-quarantined listeners aren’t headed anywhere soon.) There’s time for slower tempos, for leisurely exposition, for elaborate textural variation and for nuanced, near-subliminal sound layering. And there’s time to introduce thematic material, wander away from it, then let it waft back in from an unexpected direction — or to let something new arrive and obliterate what came before.

Where “Ghosts I-IV” only used numbers, the new “Ghosts” albums also have track titles. It’s another way for Reznor to calibrate listener expectations. “Ghosts V: Together,” the more approachable of the two albums, has names like “With Faith,” “Your Touch” and “Hope We Can Again.” Meanwhile, “Ghosts VI: Locusts,” includes “Run Like Hell” and “A Really Bad Night,” and its longest track — with a migraine throb of a bass line and barren stretches of mechanical clatter and jabbering, unintelligible voices — is called “Turn This Off Please.”

“Ghosts V: Together” has prettier, warmer ingredients. There are serenely elegiac piano melodies, counterpoint in plinking bell tones and choirs of sampled voices. Parts of the opener, “Letting Go While Holding On,” are almost Christmas-y. The track “Together” has a measured, recurring piano phrase that is gradually clouded over by voices, electronics or static only to calmly re-emerge, again and again; the 13-minute “Apart” is a glacial piano waltz with an ethereal orchestral canopy.

At low volume, much of the album can be lulling. But turn it up — or listen through headphones — and Nine Inch Nails isn’t offering unmixed comfort. The orchestral arrangements are tinctured with dissonance; sustained synthesizer tones slide on and off pitch, feeling precarious. One track — no spoiler here — begins as a piano rumination, but is suddenly assaulted by a squad of distorted guitars and a belligerent programmed beat from another kind of Nine Inch Nails song. And when the piano returns, its backdrop has turned into sirens. Any escape is only temporary.

“Ghosts VI: Locusts” thrusts the anxiety upfront. Tracks tick and pulse with the tensest kind of minimalistic repetition, and when piano and bell tones appear, they’re usually brittle, not cozy. “The Cursed Clock” opens the album with a nagging, plinking piano note that is soon joined — at the same pitch — by a sustained electronic tone seething with distortion, a precise irritant. A trumpet, improvising with hints of Miles Davis’s melancholy and Jon Hassell’s electronic effects, appears in multiple tracks, like a wanderer adrift in bombed-out terrain.

At times, Reznor and Ross clearly echo contemporary classical composers: the keening strings of Krysztof Penderecki in “The Worriment Waltz,” or the pounding, unconventionally tuned keyboards of Arnold Dreyblatt in “When It Happens (Don’t Mind Me).”

Sometimes cacophony looms up and drowns out whatever the instruments are doing; and sometimes — as in the album’s finale, “Almost Dawn” — a shard of melody peeks out to take its chances against noise and oblivion. On both albums, as in so many lives right now, there’s no way to wall off aspiration from dread.