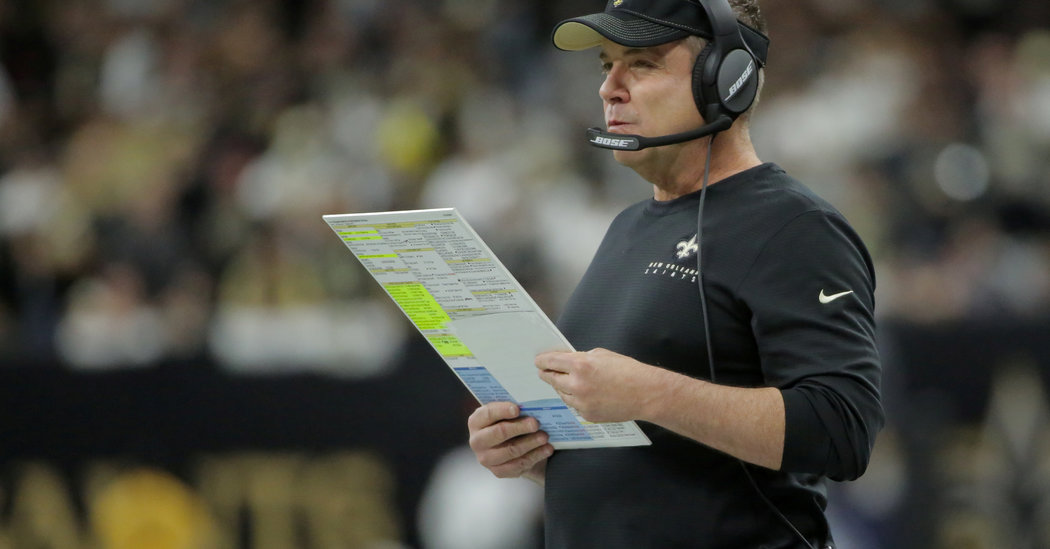 We have been learning in recent days what athletes do when they’re stuck at home, including working out in creative ways.

Lately, we’ve also been getting a peek at N.F.L. coaches and general managers’ activities. Sean Payton of the Saints, who had been self-quarantined after testing positive for the coronavirus, jumped into a Twitter thread about good football plays to use with an empty backfield. He had his own suggestions.

One was “52 All Go Special X Shallow Cross” in the “Gun Empty rt Quizno” formation, in which four receivers head out vertically. (He gave a shout out to Saints receiver Michael Thomas, who might fill the role of the crossing receiver.)

And in case you always wanted to see the inside of an N.F.L. general manager’s house, John Lynch of the 49ers posted a video of himself working from his makeshift home office, where he is scouting potential picks ahead of the N.F.L. draft, which will proceed as a TV-only event on its scheduled dates from April 23 to 25.

Right about now, people across the country would normally be stressing out over their N.C.A.A. tournament brackets, agonizing over every game. To fill that void, some are spinning almost anything into a tournament.

Anything can be debated, from the rankings in a Taylor Swift bracket (“Shake It Off” as a No. 1 seed? “Fifteen” as a No. 8? “Should’ve Said No” as a 14? What is this nonsense?) to the best college football team ever. (Similar brackets have been set up in nonvirus years for Mariah Carey, Beyoncé and others.)

Looking for upsets? Look no further than “Tournament of Champions,” hosted by Guy Fieri, on the Food Network. Sixteen professional chefs were ranked and organized based on their region. The terms of their head-to-head matchups were determined at random by a generator that tabbed the protein, vegetable and style of cooking they worked with, as well as the equipment and the amount of time they had to complete the challenge. There were buzzer beaters, with contestants finishing their dishes right as time expired, and heartbreaks, with chefs running out of time or forgetting to include an ingredient.

Brackets were busted in the very beginning. Darnell Ferguson, a No. 8 seed, took down top-seeded Alex Guarnaschelli, an Iron Chef, in the first round. The championship will be shown on April 1.

Not into food brackets? Take a turn picking out the best television characters of the century. The Ringer put together a tournament of 21st century TV characters for fans to vote on. Contestants have until 6 p.m. each day to cast their vote in each round, and the winner will be revealed on Saturday. First-round matchups included a tough choice between top-seeded Villanelle from “Killing Eve” and Blair Waldorf from “Gossip Girl,” a No. 16 seed. (Villanelle won.) DANIELLE ALLENTUCK

Bettors Get a Soccer Friendly Called Off

Monday’s worldwide soccer lineup was distressingly bare: just three friendly matches involving tiny clubs in Sweden. And at the end of the day, only two of them were played. Our interest lies in the one that was canceled.

Nashulta, a team in Division 6, the eighth tier of Swedish soccer, was set to host a Division 5 team, Eskilstuna.

Sweden has taken a different approach to containing the coronavirus than many other countries, including its neighbors. It shut high schools and colleges, but kept open schools for younger students. Restaurants and many other businesses remain open. The top soccer leagues, which had been set to start in about a week, have been postponed, but many smaller teams are playing on, at least with training matches.

Nashulta-Eskilstuna was the kind of match that few would pay any attention to in ordinary times. But with almost nothing else going on in the world of sports, gamblers were very interested in the minor game. Some bookmakers, desperate for anything to take bets on, accepted wagers on the contest.

“Throughout the day yesterday, people called our players, coaches,” the Eskilstuna F.C. chairman, Bengin Ozeran, told a Swedish television reporter. “There were people from all over the world. They said, among other things, ‘hope you lose’ or ‘good luck.’ It was probably a hundred people in an hour. It has been chaos. Yesterday was not a fun day.”

Alarm over the deluge of interest led to the game being canceled.

“We chose to postpone the match because of the players’ safety,” Ozeran said. “You never know.”

“Among other things, we were accused of having ‘fixed’ our own match, and someone hoped we would all die from the coronavirus,” the Primavera chairman, Daniel Karlsson, told Ekuriren, a Swedish newspaper. “It was probably people who lost big money on our match.

“It’s possible to bet matches down to Division 5, we know that. But making friendly games bettable is completely incomprehensible. How do they set the odds? What information do they have? The bookies can hardly know if three of our key players are on vacation or sick.”

Tuesday’s schedule included a Swedish friendly between Byttorps and Sodra Vings. Byttorps was a one-goal favorite. And Byttorps ended up winning, 3-2. Those bookmakers are pretty good, aren’t they?

There were some other relatively modest delays announced Tuesday — the German Bundesliga postponed its restart until April 30, for example — but they were increasingly outnumbered by more sweeping stoppages.

The Canadian Football League officially postponed its training camps, which were to have begun on May 17. No new date has been set for the league, which traditionally starts its regular season in mid-June, three months before the N.F.L.

The basketball Champions League, for European clubs, had been winnowed to 10 teams when the virus led to a postponement on March 12. The competition, once set to finish May 2, has abandoned half measures and on Tuesday announced it would finish in September. The decision follows shifts of the Kentucky Derby and French Open to September and the Indy 500 to August. The Masters is likely to be played in the fall, as well.

For some athletes, postponements of games are the least of it. The head of the New Zealand rugby players’ association, Rob Nichol, said, “It is absolutely quite tangible that a number of our players may end up having to go to a career outside of rugby for a period of time.”