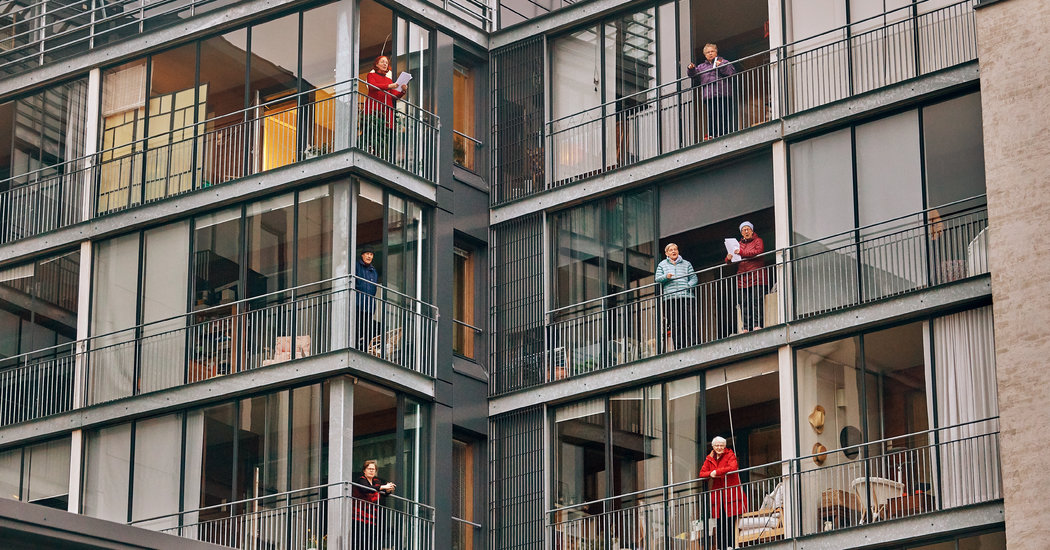 Late Friday evening, Finland’s most populous region cut itself off from the rest of the country. By the time residents of Uusimaa, which includes the capital, Helsinki, and is home to more than half of Finland’s more than 1,300 coronavirus cases, awoke on March 28, roadblocks had been erected along its highways, and the police were out in force to prevent anyone from entering or exiting.

This week, those police officers may notice a few observers tracking their efforts. The photographers and interviewers will not necessarily be journalists, but rather employees of the National Museum of Finland, attempting to capture the historic moment in real time.

Around the world, the coronavirus outbreak has sent legions of emergency medical and health care workers into overdrive. But it has also meant work for a handful of curators and museum researchers in Europe, charged with tracking the events and implications of the crisis, even as it happens. Most of them do not know exactly how or when their findings will be used, but they are confident that future generations of museum workers — and visitors — will want the information.

It’s not just the Finns who are doing it. Museums in Denmark, Slovenia and Switzerland, among others, are busy documenting the crisis in various ways, from asking citizens to keep diaries of their daily lives under lockdown to acquiring objects that represent the moment.

At the Vesthimmerlands Museum in northern Denmark, the curator Maria Hagstrup and a colleague have been taking photographs — from a safe distance — of the closed stores and empty streets of the country on lockdown. She has also been collecting firsthand accounts from residents.

“Usually, we think of a museum as a place with objects behind solid glass,” she said in an interview. “But right now, we have a chance to get people’s impressions in the moment, before they’ve even had time to reflect on them.”

With the help of the municipal government, the museum put out a call on social media for citizens to send in their accounts of life during the pandemic. So far, most of the stories have come in via email: the dentist who had to close his practice, the older couple who worry about their autistic son, the newly home-schooled boy describing what it’s like to have his mom as his teacher. One small-business owner sent in a poem.

“As a historian, you’re always thinking about what’s missing, of what you want to know more about,” Ms. Hagstrup said. “I think what people will want to know about this crazy time is what everyday life was like, what it was like to live through.”

When it is no longer a health risk to gather objects for its collection, the Vesthimmerlands Museum hopes to secure some of those, too. Curators at the Victoria and Albert Museum in London are also thinking about acquiring such items. In 2014, the museum, which focuses on applied art and design, opened a gallery devoted to “rapid response collecting” — a term it coined for the acquisition of objects that “articulate major moments in our contemporary history,” according to Corinna Gardner, a senior curator.

Ms. Gardner, who is in charge of the rapid response collection, played a decisive role in selecting items such as a “pussyhat” (the bright pink caps worn during the 2017 Women’s March), various objects bearing the Extinction Rebellion logo, and a set of Katy Perry-brand false eyelashes, chosen as an artifact of global consumer culture.

Ms. Gardner said she was already thinking about objects that articulated something interesting about the pandemic. She was intrigued by a device that can be attached to a door handle for hands-free opening, created by the architectural designers Ivo Tedbury and Freddie Hong and available online for 3-D printing, she said.

In the United States, the National Museum of African American History and Culture has collected artifacts from events like the protests over the death of Michael Brown in Ferguson, Mo., and the days of racial strife in Charlottesville, Va., in 2017.

In Manhattan, the New-York Historical Society, has sent out its “history brigades” to events like Occupy Wall Street, while in Orlando, Fla., the Orange County Regional History Center hurried to collect items to record the tragedy of the Pulse nightclub shooting. The center is now collecting artifacts from the current crisis: photographs of empty store shelves, cancellation emails and social media posts discussing the impact of the virus.

Acquiring new objects poses a special challenge for museums right now, because it involves interacting with the public and handling artifacts in ways that could spread the illness. And social distancing is making traditional field work — usually conducted face to face — impossible. That’s why the National Museum of Denmark, in Copenhagen, is currently focusing its efforts on digital artifacts.

The museum is asking citizens of all ages to answer an online questionnaire to preserve important information about everyday life during the crisis for future study.

“Whether or when we will have a special coronavirus exhibition, I don’t know,” said Christian Sune Pedersen, the head of research in the museum’s department of modern history. “Maybe we will consider including it in the permanent collection, since it is a central historical event. But right now, our focus is on remembering what happens in our everyday lives, which goes to the core of the museum’s vision.”

In Finland, the National Museum has a long history of rapid response collecting during historical turning points, even if they did not call it that during the 1918 Finnish Civil War or during World War II. Some of the photographs taken recently by Maria Ollila, curator of contemporary history for the museum, and her collaborators — shots of panic buying and home schooling, for instance — will go onto the website of the Finnish Heritage Agency’s Picture Collection as soon as they have been cataloged. And, if the crisis is over by fall, she said, some of the material she is gathering could go on display in a section of the National Museum devoted to contemporary collecting.

In the meantime, gathering artifacts from the pandemic means keeping on top of its ever-shifting dimensions. For two weeks before the country’s lockdown, the Finnish researchers held face-to-face interviews on subjects that ranged from how the crisis was affecting restaurants to the shutdown of Helsinki’s harbor. But the changing situation forced them to adapt their techniques; They now conduct many interviews by phone or Skype and are considering asking citizens to “self-document” — to send in photographs and video they have shot themselves.

Later this week, when they begin documenting the closing of the Uusimaa border by observing the situation at a roadblock and interviewing the police officers in charge, the researchers will revert to traditional in-person techniques — with some era-appropriate adjustments.

“There’ll be two photographers, and me, who’ll do the interviewing,” Ms. Ollila said. “We’ll just have to make sure we stand two meters apart.”