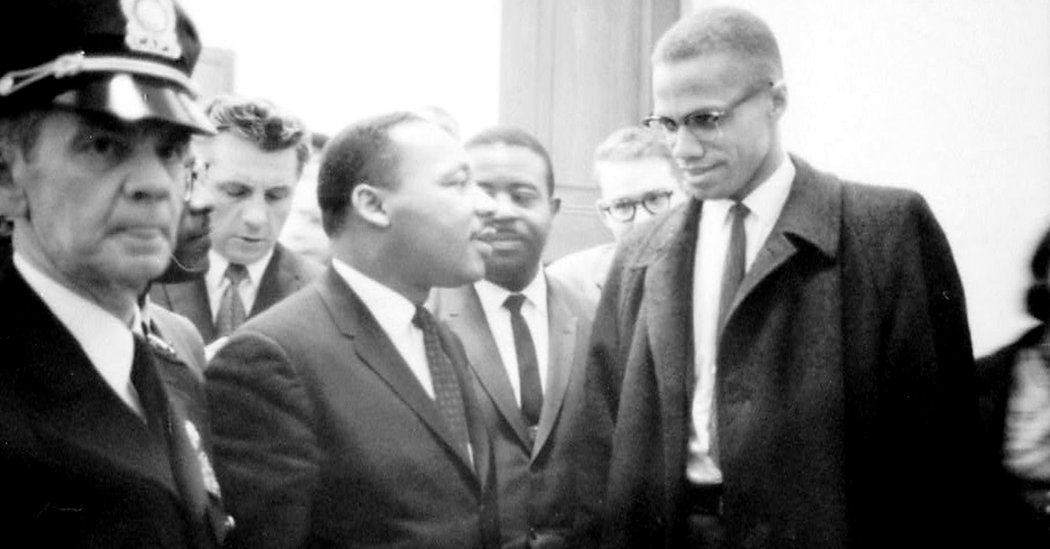 THE SWORD AND THE SHIELD
The Revolutionary Lives of Malcolm X and Martin Luther King Jr.
By Peniel E. Joseph

What an era that could see the rise to national prominence of Martin Luther King Jr. and Malcolm X. In his immensely valuable new book, “The Sword and the Shield: The Revolutionary Lives of Malcolm X and Martin Luther King Jr.,” Peniel E. Joseph describes this time, roughly from 1954 to 1965, as “the civil rights movement’s heroic period,” aided greatly by the actions of these two men. In these years, King and Malcolm X captured the varied imaginations of African-Americans, approaching the subject of what was to be done about the circumstances of black life in the United States from different premises and vantage points. Their images have fallen prey to cliché: the benign King, who dreamed of a utopian “beloved community” in which American society would become fully integrated racially, and the more dangerous Malcolm X, who promoted a black nationalism that sought nothing from whites save for noninterference with blacks’ effort to build lives of dignity.

“The Sword and the Shield” shows the reality to have been far more complicated. Indeed, Peniel argues for a “new interpretation” of the two leaders. King and Malcolm X may have been polar opposites at the start of their time in the public eye, but they had moved toward each other by the time their lives on the public stage were ended, both by an assassin’s bullet. King would die at the hands of a member of a race to whom he had reached out with an offer of friendship, Malcolm X at the hands of men of the race in whom he had put so much faith and trust.

One of the great strengths of this book is the detail with which Joseph supports his thesis. Because their lives have been the subject of award-winning biographies — and Malcolm X produced his own widely read autobiography — we know much about both men, and how their origins influenced their approach to activism. King famously hailed from what could be called the black middle class, the son of a prominent pastor, and we know that Malcolm X had a more hardscrabble youth, with a father lost either through an accident or murder, and a mother lost to mental illness. But this biography’s dual nature, with its close comparison and contrast of King’s and Malcolm’s journeys to their ultimate fates, enhances our understanding of how these men came to their respective conclusions about the state of the world, and how to change it.

Joseph’s depiction makes clear that both men believed themselves indispensable to the black struggle. Their instinct for leadership pushed them to their physical limits, as they worked and traveled near nonstop, to the detriment of family life. One gets the sense that Malcolm’s path, particularly as he became estranged from the Nation of Islam, was more daunting. Unlike King, who had the structure of the black Christian church that had supported him from childhood, and the aid of established black secular organizations like the Urban League, the N.A.A.C.P. and its legal arm, the Legal Defense Fund, Malcolm was constantly setting up new groups to help fulfill his vision for black advancement. Although King sought ties with allies overseas, Malcolm X had the more ambitious plan to bring people of African descent, and then all people of color, together in a coalition to promote the rights of nonwhites around the world. Joseph posits that Malcolm X’s demand for “radical dignity” for black people was heavily influenced by his parents, Earl and Louise Little, who had been followers of Marcus Garvey. Garvey’s Back to Africa movement was as much about instilling racial pride and black self-determination as actually leading African-Americans back to the Mother Continent.

In writing about King, Joseph joins a chorus of voices — among them, Tommie Shelby, Brandon M. Terry and Michael Honey — who have argued against the present-day image of King as a harmless figure, mouthing platitudes so broad and comforting that people from all points on the political spectrum could agree with them. The newest writings remind us that King’s insistent “quest for radical black citizenship” made him far from comforting to large segments of the American population. The editorials and articles written in opposition to him, the persistent death threats and the surveillance by the F.B.I. (which surveilled Malcolm X, too) show a level of hostility that might shock younger generations raised from elementary school age to celebrate him as a universally loved figure whose birthday is now a national holiday.

The new writings also emphasize King’s radical economic vision. Even before he became a public man, he wrote of his affinity for socialism. Joseph highlights this aspect of King’s thought, and gives a persuasive account of King’s migrating view on the subject of economic justice and the role it could play in fostering racial justice. This migration, or evolution of views, is a theme that allows Joseph to tie his subjects together in an especially effective way. For as King altered his views, so did Malcolm X. Joseph shows that Malcolm’s transformation began even before his famous trip to Mecca, and that some of the changes were due to his increasing respect for King and the movement that had grown up around him.

Reading Joseph’s side-by-side consideration allows us to see two men’s visions move toward convergence as the reality of the limitations of their initial positions became clear. King’s faith in nonviolence and Christian charity bumped up against a hard wall of hatred and white supremacy that was unmoved by arguments about morality and love. As uplifting as King’s arguments might be, as a strategy against white supremacy they repelled Malcolm X, since they suggested a lack of self-awareness and self-love. King came to realize that more concrete policy initiatives — that did not simply rely on changing hearts — were needed, and that the self-esteem of black people, under constant attack by white supremacy during and after slavery, mattered greatly. At the same time, Malcolm’s justifiable call for self-defense, which sometimes shaded into the hint that whites and blacks might eventually do battle with each other, faced a hard reality: Blacks, greatly outnumbered, would be at a decided disadvantage in any toe-to-toe fight against whites. Strategic but respectful alliances with enlightened whites might be fruitful. That, of course, is what King’s movement had been about.

In a way, “The Sword and the Shield” answers the old question about whether the times make the person or the person makes the times. It would be hard to find a context more suited to the talents and interests of Malcolm X and Martin Luther King Jr. than the years of the Cold War, the optimism of the post-World War II economic boom and the dismantling of European colonial empires. Both men, and the movements they led, benefited enormously from the West’s ideological battle against Communism. How could the United States, with its own version of an “iron curtain” of legalized segregation, lay claim to a moral high ground? Prosperity, for a time, banished the selfishness that arises in eras of scarcity. And the hopes engendered by the rise of people of color in all parts of the world could be connected to the battle for civil rights in America. We are no longer in those times. Joseph’s book makes one wonder how the two men would have deployed their talents in our less than heroic age.