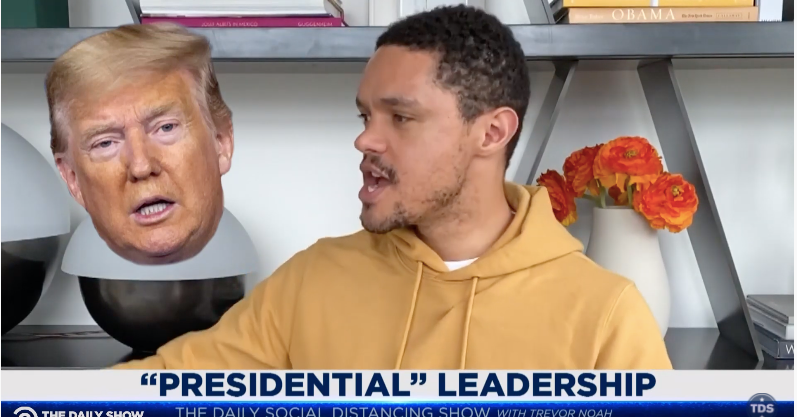 Welcome to Best of Late Night, a rundown of the previous night’s highlights that lets you sleep — and lets us get paid to watch comedy. If you’re interested in hearing from The Times regularly about great TV, sign up for our Watching newsletter and get recommendations straight to your inbox.

Live From Wherever They Live

On Monday night, late-night hosts returned to broadcast versions of their shows from their kitchens, dens, offices and children’s playrooms. Most went more casual in dress, too, but Jimmy Kimmel and Stephen Colbert both stuck with their typical suits.

“A: It gives a sense that I’m at a job,” Colbert said on what he called “A Late Show.” “And B: I do not have a physique that lends itself to casual clothing.”

“Wow, OK Firstly, the ratings aren’t high because of Trump. People are watching TV because of the virus. That’s why they’re watching the briefings. This will be like the guy on ‘Friends’ who owns the coffee shop taking credit for the success of the show: ‘It’s all because of my lattes, you know? That’s why people watched.’ No, you just happened to be there, dude.” — TREVOR NOAH

“And by the way, just because people are watching you doesn’t mean it’s good. Have you heard of ‘The Masked Singer’? Right now half of this country is watching a show about a bunch of toothless meth heads abusing tigers.” — JIMMY KIMMEL

“A hundred and fifty thousand Americans are infected, 2,500 Americans have died, and he’s excited about his ratings. You know, it reminds me of the Hindenburg coverage.” — STEPHEN COLBERT

“Also, we’re only trapped inside watching because you kept ignoring the crisis and pretending it would go away until it was too late. We’re forced to stay inside and watch you because you screwed up. More people than ever are playing Scrabble right now, but it sure as hell isn’t because Scrabble is fun.” — SETH MEYERS

It was during some of these media briefings that Trump has made statements he has later pulled back from, including extending social distancing guidelines through April 30 after previously suggesting they could be relaxed by Easter.

“Trump is flip-flopping so much, if the Olympics weren’t canceled he would be competing against Simone Biles.” — TREVOR NOAH

“The positive news is the president for once appears to have listened to someone. Despite originally saying everybody be back to work by Easter, he announced he that will extend social distancing guidelines through April 30 so Purell has frozen over. I’m honestly surprised he didn’t just say he’s moving Easter.”— JIMMY KIMMEL

“On the plus side, you can still spend Easter the way you always do — by completely forgetting about it until your mom calls and you lie about going to church.” — SETH MEYERS

“Think about how grotesque this is — health care professionals are courageously putting their lives on the line and Trump is baselessly accusing them of stealing masks and lying about how many ventilators they need, while bragging about his TV ratings. He’s either a sociopath or he’s been stealing from Jeanine Pirro’s liquor cabinet, which would explain why he often slurs his words like a drunk.” — SETH MEYERS

“Trump thinks they might be stealing masks because he would definitely steal masks. Trump is so deeply and completely corrupt he can’t even imagine someone having a legitimate motivation. I’m surprised he hasn’t opened a press conference saying, ‘Bad news, ventilators went missing. Good news, you guys, we found a corresponding amount of Trump-o-lators, which are very affordable.’” — SETH MEYERS

“All of a sudden hospitals need way more ventilators than usual. What’s that about, huh? It’s the same way I’ve noticed that sometimes people on the streets have a lot of umbrellas, and then sometimes nobody has an umbrella. Something isn’t adding up here.” — TREVOR NOAH

“Is he implying that after work these nurses get off their 12-hour shift and steal masks so they can go sand a deck in their backyard?” — JIMMY KIMMEL

“Really? Accusing medical workers of stealing masks? That’s like frisking Mother Teresa on the way out of the orphanage. ‘Check her pockets! Check her pockets! She could be smuggling out some gruel!’” — STEPHEN COLBERT

The Bits Worth Watching

On “Desus & Mero,” the titular co-hosts asked Dr. Anthony Fauci what it feels like to be the smartest guy in the room.

What We’re Excited About on Tuesday Night

Senator Elizabeth Warren will be a virtual guest on “Late Night With Seth Meyers.”

Also, Check This Out