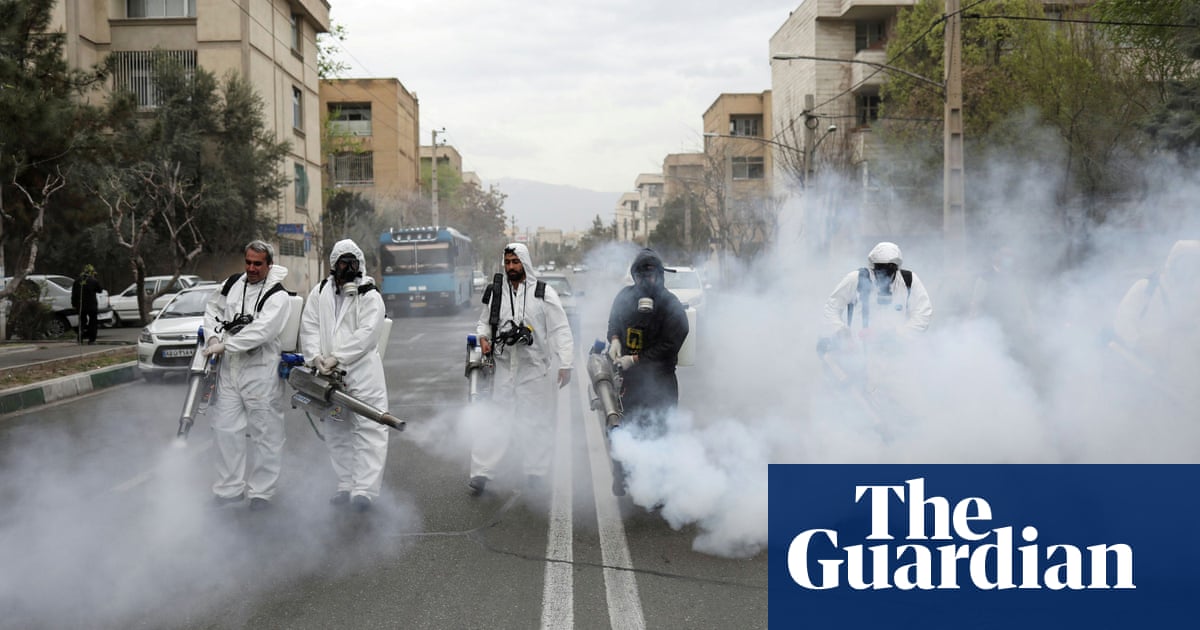 At a time when all of humanity is facing a common, invisible, enemy, world leaders have called for a suspension of economic sanctions that have increasingly become the pursuit of war by other means.

The Trump administration has responded so far by ignoring those appeals and intensifying punitive measures on the two nations it has identified as America’s greatest enemies: Iran and Venezuela.

The spread of coronavirus has not slowed the regular drumbeat of successive layers of sanctions imposed by the state department on Iran. Last week, a new list of people and companies linked to the Revolutionary Guard was targeted.

Briefing the press on the indictment, attorney general William Barr left little doubt about their political nature, portraying the coincidence with the pandemic as serendipity, claiming it will spur on regime change.

“It’s good timing, actually,” he said. “The people in Venezuela are suffering, and they need an effective government that responds to the people.”

Peter Harrell, a former senior sanctions official at the state department, said: “The administration is taking a kind of ‘kick them while they’re down’ approach, seemingly with the hope that by piling on sanctions and other actions, the administration can capitalize on the virus in Iran and Venezuela to spur greater public opposition to the incumbent governments and perhaps regime change.”

In terms of actual concrete economic damage, last Thursday’s new measures are unlikely to make much difference. Iran and Venezuela are so heavily sanctioned already that there is precious little income left to cut off. But they signal US determination not to relent even in the face of a mounting coronavirus death toll.

The new measures have been imposed at a time when both countries, long mired by chronic mismanagement and corruption – are facing plunging oil prices on which both producer nations are dependent for foreign currency.

In Tehran, government ineptitude allowed coronavirus to spread unhindered for weeks before serious action was taken. There are now more than 40,000 infections and 2,757 deaths in the country.

“The government’s response to the outbreak of Covid-19 in the early weeks is really responsible for where the country is today,” said Ariane Tabatabai, a scholar at Columbia University.

In Venezuela, the pandemic has yet to hit in full force: just over 100 cases have so far been reported. But the country is in an even worse state to cope when it does, with disastrous results for its population and the region, home to some 5 million Venezuelan refugees.

‘Mask, gown, gloves – none of that exists’: Venezuela’s coronavirus crisis

Only a quarter of Venezuela’s doctors have access to a reliable supply of water and two-thirds are without soap, gloves or masks. There are 73 intensive care beds in the whole country.

“If the virus were to take off in Venezuela, and the country were not to receive a huge injection of international support, it would face an absolute disaster,” said Ivan Briscoe, Latin American and Caribbean director at the International Crisis Group.

The United Nations secretary general António Guterres, and other top UN officials have called for a sanctions ceasefire around the world

“In a context of global pandemic, impeding medical efforts in one country heightens the risk for all of us,” Michelle Bachelet, the UN commissioner for human rights, said. “The populations in these countries are in no way responsible for the policies being targeted by sanctions, and to varying degrees have already been living in a precarious situation for prolonged periods.”

The Trump administration has insisted that its sanctions regimes are aimed at the governments of Iran and Venezuela and not their populations.

It points to exemptions for humanitarian goods, which were established in the last days of the Obama administration.

However, such exemptions exist more in theory than in reality. International banks are so skittish about handling any kind of trade with Iran that it is almost impossible to get financing for humanitarian goods purchases.

Adding to the uncertainty, some medical equipment that has become essential for fighting the coronavirus is on a list of dual-use items that requires specific US Treasury authorisation. The line between permissible and forbidden items is badly defined.

Even before the pandemic hit, the US sought to open up a separate channel for humanitarian goods, through Switzerland, but it is mainly relevant for companies with Swiss subsidiaries and suffered from the same uncertainties as other channels.

“The consequence of all that is that Iran has a really hard time making speedy and reliable payments for these types of humanitarian items,” Esfandyar Batmanghelidj, an expert on economic diplomacy and founder of the Bourse & Bazaar. “What that means right now, when you’re dealing with an acute crisis like this and you have a sudden surge in demand. Iran is basically going to be at the back of the line.”

On Tuesday, the long-delayed first export was made through a European payments mechanism, Instex, set up 14 months ago to insulate Iran from US sanctions. According to the Wall Street Journal, the shipment was of medical equipment worth 500,000 euros, ordered before the coronavirus outbreak.

Venezuela is already selling its oil at a significant discount and the price collapse could make it uneconomical to export. At the same time, the political standoff between Maduro and his US-backed challenger, Juan Guaidó, who are recognised as the head of state by different countries, makes it impossible for the country to get aid money. The International Monetary Fund turned down Maduro’s request for $5bn in emergency aid funds, because of the lack of clarity of who was in charge.

Aware of the gravity of the situation, both sides have been in talks about the possibility of a unity government, negotiations that were disrupted by timing of the Maduro indictment – which by charging top generals at the same time, made it less likely the military would desert the incumbent leader.

Sanctions advocates argue they are humane alternatives to waging war for foreign policy objectives, but in both Iran and Venezuela that argument is weakening with the advance of the pandemic.

Richard Nephew, former principal deputy coordinator for sanctions policy at the state department, said:“It is very difficult to argue that sanctions are intended to serve the best interests of the international community on the whole and the countries being targeted in particular if they are also perceived as worsening an unrelated humanitarian crisis.”