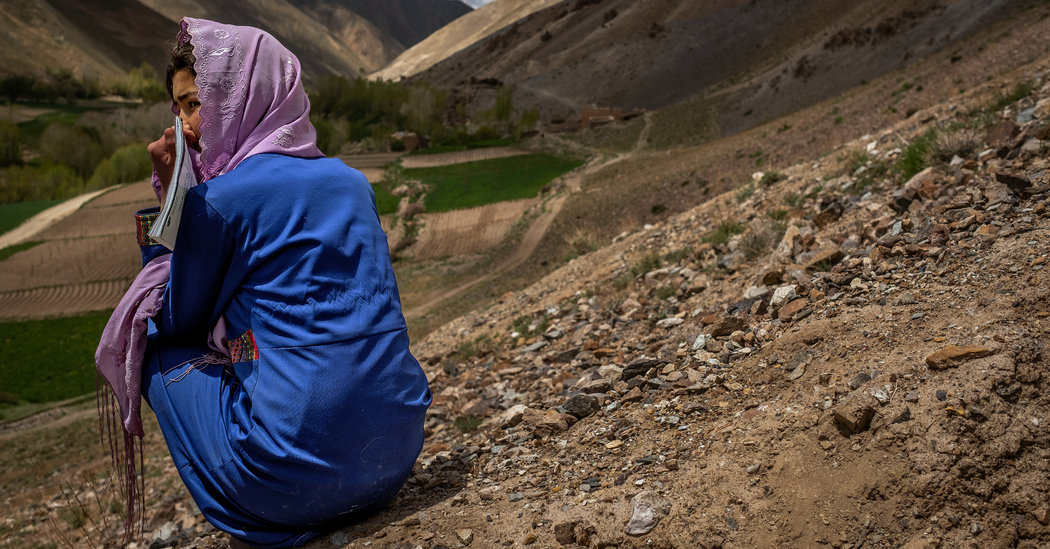 Times Insider explains who we are and what we do, and delivers behind-the-scenes insights into how our journalism comes together.

KABUL, Afghanistan — Last spring I visited the Rustam School in a remote corner of the Yakawlang District in central Afghanistan’s Bamiyan Province. While the country’s longest war was continuing to destroy lives in other parts of Afghanistan, where the Taliban are accused of burning many girls’ schools to the ground, there was hope at this school with no electricity, heat, phone connection or computers. Even shepherd children left their flocks and came to class.

Two-thirds of the students were girls. They studied together with boys in the same classrooms (something forbidden by the Taliban). They scored the highest marks, and their families were proud.

For me, the visit was a flashback to a childhood I had forgotten.

It was early 2002, I think, when I was 6 — shortly after the Taliban were overthrown following the American-led invasion of Afghanistan in December 2001 — that my father decided to move our family from the Jaghatu District in Ghazni Province to a village in western Kabul. It was the beginning of a new journey.

We came to Kabul by truck and were living in a muddy house in the settlement known as Dasht-e-Barchi. A few days after our arrival, my family asked a relative to put me into a school. It was an exciting moment.

Around 6 a.m. on the first day, my grandmother and I started walking to a school that was an hour away. Neither of us had had breakfast.

It was the first time I had seen a school loaded with students. There were hundreds of them. And they were all wearing uniforms. Every girl but me had on a long black dress and a white head scarf.

On the first day, I didn’t sit in the classroom; instead I did the paperwork.

On the second day, I woke up before everyone else, and once again my grandmother walked an hour with me to the school. It was almost 7 a.m. when we arrived at the front door and the watchman opened it. My grandmother took me to the school office; from there, the head teacher showed me to my classroom.

There were 70 students in a narrow room. It was shocking. Some students were 15, or even older. I seemed to be the youngest one there.

At first everyone thought I was slow, because I was so shy that I wasn’t taking part in the class activities. But I was actually ahead of others my age: I started in second grade, not first, because I could already read the alphabet.

When the Taliban were in power, girls were not allowed to go to school. I was lucky enough to study at home with my mother. Though she hadn’t been to a proper school, she could read and write. I remember when I was very young she used to read Hafiz poems every night by lantern light. I memorized a lot of poetry before I could read.

Even though I had joined my class in the middle of the year, I got the third highest score on the final exam. Nobody could believe it, going from a village to third among 70 students.

The time flew by as I learned new things and got used to the crowded city of Kabul. In the blink of an eye, primary school was over.

When I started middle school, we didn’t have a classroom. We had to study in a tent, as did many of the students at the Rustam School, which now has nearly 500 students. On hot days in the summer I couldn’t focus. Sometimes it was so hot I stayed home.

A few of my classmates changed schools, so I did the same, without my family’s knowledge. Since the new school was even farther away, I had to take a bus.

The new school was fancier, but the system was the same: We didn’t have enough teachers or enough books. There were no math, chemistry or physics classes — I had to learn those subjects on my own — and at one point a math major was teaching history.

I got sick during the first semester of high school and didn’t attend any classes that year. The next year I repeated the same classes and managed to pass the 10th-grade final exam. I was happy to be back on track.

But that winter, while my father was working at a gas station in the city of Mazar in Balkh Province, he was on top of a tanker when it caught fire. He was badly burned. As the oldest child in the family, it was my responsibility to stay home and take care of him. I had to change his bandages and clean his wounds. It took him a long time to recover.

In spite of it all, I graduated from high school with a diploma.

It had always been my dream to be a journalist. But my family and close relatives were against it. (There were many girl journalists on TV shows we watched back then, and they didn’t want me to be like them.) So I studied photography for three months, before taking a political science course at a private university.

In 2015 there was a big protest in Kabul. I decided to take some pictures just for practice. From out of nowhere a journalist at Al Jazeera English got in touch and published my photos. It was a key moment of my journalism career, a tiny light in the dark. It encouraged me to keep going. I freelanced after that for two years as a writer/photographer.

In the spring of 2017, Zahra Nader, a New York Times reporter at the time, left Afghanistan and told me to follow another Times reporter, Mujib Mashal, and the Kabul bureau chief, Rod Nordland, on Twitter. “They will tweet about the vacancy and you can apply,” she said. I waited for a few days, but neither of them tweeted about a reporter job at The Times.

At 2 a.m. one day, I found Rod’s email address on The Times’s web page and wrote to him. “I’ll be happy to talk with you, sure,” he replied right away. “I’ll let you know when I’m back in town, probably late next week.”

On July 22, 2017, I joined the Times bureau for a weeklong tryout and contributed four stories. After the trial, I was told to wait. Others would be trying out, too. At the same time, my grandmother got sick. On Aug. 10, she passed away, and I was lost. I didn’t sleep for days. She was the person I was closest to in my family.

Four days later, I got the offer from The Times’s Kabul bureau. I didn’t know whether to mourn or to celebrate. I had lost my grandmother and got my dream job.

The next morning, with a broken heart and broken English, I started working as a Times reporter in Afghanistan.

When I struggle with the language, Rod Nordland, who has become my mentor, pushes me. “Write,” he urges. “We are here to help.” He and Mujib Mashal both help me a lot. Once when I made a mistake, Mujib told me: “Read more. Read as a writer.”

That was three years ago. I still read every night. In the year that I was sick, I read maybe 40 novels, in English and in Farsi.

I am not yet confident enough to write without help, but I am on my way.

Since 2017 I have covered the Afghanistan war — a war started by Americans that has changed my life. When there were Taliban in the country, my life was upside down. I wasn’t Fatima Faizi; I was fated to only be someone’s wife, to clean, cook, raise the children and never have a chance to dream.

Now the peace process is unfolding. I don’t have a college degree. An uncertain future waits for me and for girls who get the highest scores at the Rustam School.

UPDATE: After Rod Nordland’s dispatch on the Rustam School was published in June 2019, two representatives of ZDF (German National TV) visited the school and promised to build eight new classrooms. The villagers volunteered to help with the construction, but nothing has yet been done. The school received a few English books. The principal doesn’t know who sent them.

In 2020, 48 students will graduate from the Rustam School, and the 40 who have enough money to travel have registered for the Kankor exam (a general entrance exam for university that is administered in the center of the province).

Follow the @ReaderCenter on Twitter for more coverage highlighting your perspectives and experiences and for insight into how we work.