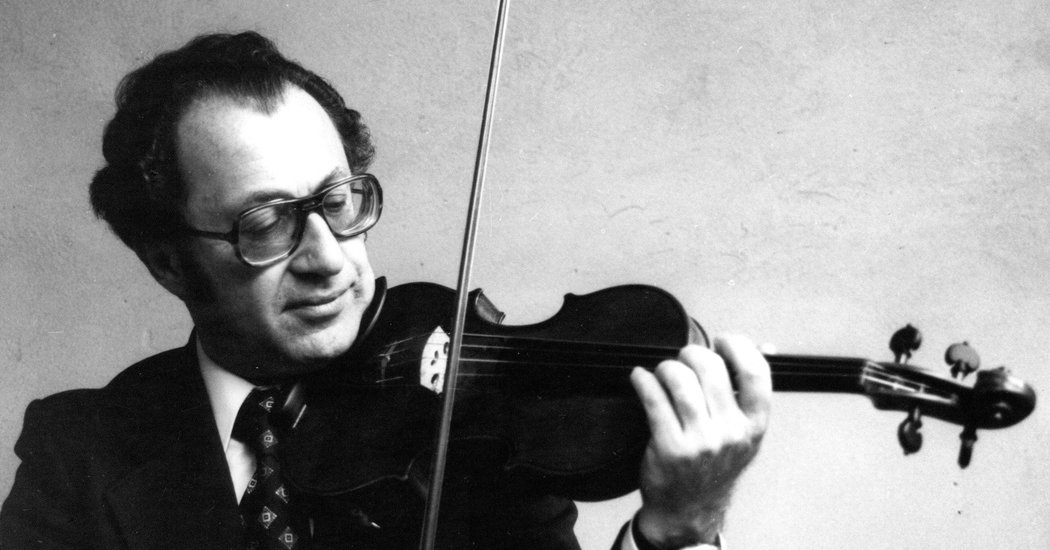 Hellmut Stern, who fled Germany with his family as a child to escape the Nazis, then returned years later to join the Berlin Philharmonic as a violinist and later became a leading member of the orchestra, died on March 21 at his home in Berlin. He was 91.

The Philharmonic announced the death. Mr. Stern had Parkinson’s disease in his later years, according to Misha Aster, a friend who wrote about the Philharmonic.

Admired as much for his life story as for his musicianship, Mr. Stern was a member of one of the world’s most illustrious orchestras for more than three decades. For most of that time, the Philharmonic was led by the strong-willed conductor Herbert von Karajan, one of the towering maestros of the 20th century.

Mr. Stern rose to become the equivalent of associate concertmaster and also served several terms as a member of the orchestra’s leadership committee. As such, he was “deeply involved in orchestra politics and management,” Mr. Aster said in a phone interview. This often put him in conflict with Mr. Karajan, who had a tempestuous relationship with the orchestra anyway.

For Mr. Stern, who was Jewish, the relationship was particularly fraught, because Mr. Karajan had been a member of the Nazi Party.

Mr. Stern was well liked by the other players and carried a certain moral authority, chiefly for making his home in the city that he had fled during the Holocaust.

“By returning to Germany after the persecution of the Jews and the Holocaust and becoming a member of our orchestra, he set a unique example of reconciliation and forgiveness,” Alexander Bader, a clarinetist and chair of the Berlin Philharmonic’s orchestra board, said in a statement.

During the Nazi era, the Berlin orchestra had been purged of Jewish performers. Jewish patrons were barred from attending concerts. And Jewish composers like Mendelssohn and Mahler were removed from the repertoire. The orchestra played Beethoven’s Ninth Symphony for Hitler on his birthday and staged a concert each time Nazi troops invaded another country.

But Mr. Stern dreamed from his earliest days with the Philharmonic, in the 1960s, of arranging a concert tour of Israel. While Israel said it would welcome the musicians, it refused to accept Mr. Karajan.

Only after Mr. Karajan died in 1989 was Mr. Stern finally able to negotiate the tour. The Philharmonic had an unexpected opening in its schedule, and Mr. Stern seized the opportunity.

In April 1990, the orchestra, under the direction of Daniel Barenboim, gave seven concerts in different Israeli cities. The high point came in Tel Aviv, where the Berlin ensemble joined with the Israeli Philharmonic in playing Saint-Saëns, Weber, Ravel and Beethoven under the baton of Zubin Mehta.

Chanoch Ron, the music critic of the daily Yediot Ahronot, wrote that he and other Israelis were moved to tears when the 120 Berlin musicians stood and played Israel’s national anthem. That moment, he wrote, symbolized that the Jewish spirit had survived while the Third Reich had been destroyed.

Mr. Aster, the author of “The Reich’s Orchestra: The Berlin Philharmonic 1933-45” (2012), said the concerts were a triumph for the orchestra, for the relationship between Germany and Israel, and for Mr. Stern personally.

“He was making his life’s experience whole by uniting these worlds, the German and the Jewish,” Mr. Aster said. “He was linking these stations of his life — that had seemed so disparate but were very much part of his biography — into a singular moment.”

Heinz Hellmut Stern was born on May 21, 1928, in Berlin. His father, Dittmar, was a banker, then a voice teacher; his mother, Ilse Rose (Wolff) Stern, a pianist, started teaching her son when he was 5.

In 1933, when Hitler became chancellor of Germany, Jewish teachers were no longer allowed to give private lessons to non-Jews, and the Sterns were severely restricted. Dittmar Stern became a laborer as the family income dwindled.

They spent five years trying to get out of Berlin, applying for positions all over the world. They were rejected by several countries, including the United States because of restrictive immigration rules.

Hellmut’s talent was quickly recognized. When he was 9, his Jewish school deemed him its most gifted student and gave him a violin, which he learned to play.

Shortly after the Kristallnacht pogrom in November 1938, in which the Nazis murdered Jews and burned their synagogues and businesses, the Sterns had a chance to escape. Mrs. Stern had obtained a fictitious contract that made it appear as if she had been hired as a pianist in China.

They almost couldn’t go because they didn’t have the money. But Hellmut’s violin teacher, Gerda Bishop, raised enough from her friends to send them.

The Sterns settled in Harbin, a thriving multicultural city in northeastern China, where they lived in run-down conditions and Hellmut was often sick.

He recounted these details in his autobiography, “Saitensprünge” (1990), translated as “String Jumps.” The phrase was a play on words, referring to the leaps of the violin bow across the strings and, in a larger sense, to the leaps of faith that he had to make as a man in exile.

Hellmut accompanied his father’s voice students on the piano and held his first public concert as a violinist in 1942. He contributed to the family income by playing in bars and hotels and at weddings.

The family moved to Israel in 1949. Hellmut was working as a pianist in the bar of the King David Hotel in Jerusalem when he caught the attention of the violinist Isaac Stern, who was not a relation. The master gave him an introduction to audition for the Israel Philharmonic Orchestra, and Hellmut Stern won his first orchestral post, in the second violin section.

His parents could not make a living in Israel, and in 1956 they moved to Chicago. Hellmut soon followed, taking jobs selling shoes and working as a Fuller Brush man. He took a job with the St. Louis Symphony Orchestra in 1958 and later with the Rochester (N.Y.) Symphony Orchestra.

But he found life difficult in the United States, and in 1961 he returned to what was then West Berlin, which he regarded as home, and joined the Philharmonic.

“We were really Germans,” he once said. “Even when I was in exile, when I was grown up, I still felt like a German.”

He married Gisela Gerecke in 1962. They later divorced. He is survived by his second wife, Tatiana Stern; his daughter, Adina Stern; his son, Manuel; and two granddaughters.

After he retired from the Philharmonic in 1994, Mr. Stern toured hundreds of schools in Germany and elsewhere, seeking to educate students about fascism and dictatorship. He described himself as a “professional witness.”

“Mr. Stern was a unique musical figure in Germany,” the violin soloist Daniel Hope, who is based in Berlin, said by email.

“He had a lively presence and was an important witness to the evils of Nazism,” Mr. Hope said. “He kept the dialogue of remembrance and healing alive in both German culture and society and was one of the last of his kind.”