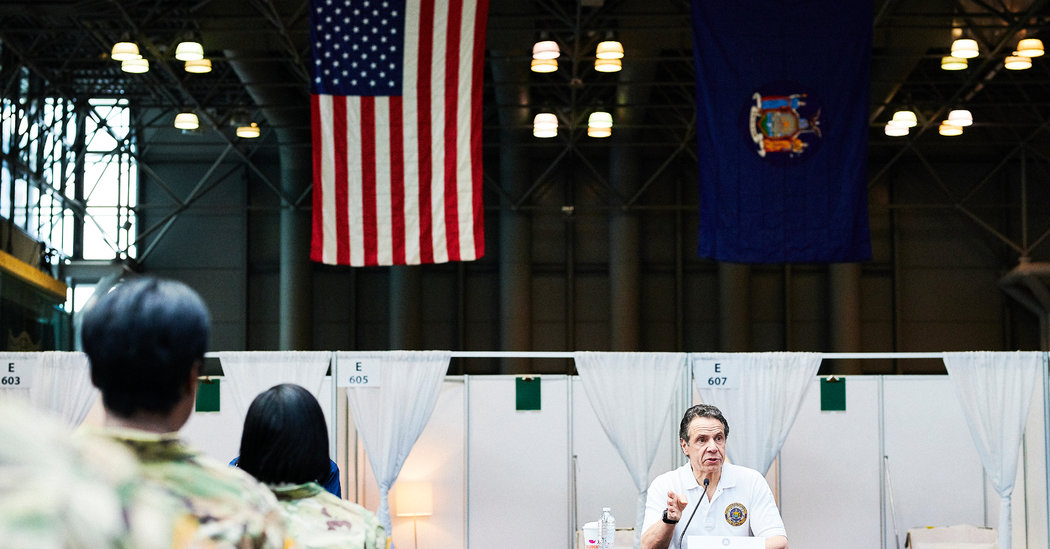 A chorus of governors from across the political spectrum is publicly challenging the Trump administration’s assertion that the United States is well-stocked and well-prepared to test people for the coronavirus and care for the sickest patients.

In New York State — the center of the nation’s outbreak, with at least 1,550 deaths — Gov. Andrew M. Cuomo said on Tuesday that the country’s patchwork approach to the pandemic had made it harder to get desperately needed ventilators.

“You now literally will have a company call you up and say, ‘Well, California just outbid you,’” Mr. Cuomo, a Democrat, said in his daily news briefing. “It’s like being on eBay with 50 other states, bidding on a ventilator.”

Gov. Larry Hogan of Maryland said on Tuesday that his state was “flying blind” in the fight against the coronavirus because officials did not have enough tests. When asked during an NPR interview about President Trump’s comments suggesting that a chronic lack of test kits was no longer a problem in the United States, Mr. Hogan, a Republican, did not mince words: “Yeah, that’s just not true.”

And in Connecticut, Gov. Ned Lamont, a Democrat, said on Tuesday that it was “disturbing” to learn that a national stockpile of medical supplies was running empty.

Across the country, America’s governors are going head-to-head with the Trump administration over the need for testing supplies and ventilators. At times defying party lines, some have sparred with the president on phone calls and in public interviews. Still others have sided with the president, or calculated that it would be easier to get the needs of their states met with support and praise.

The efforts to draw attention to dire medical shortages have intensified as cases of the coronavirus have exploded in the United States, threatening to overwhelm the country’s hospital system. This week, two governors — Mr. Hogan, the Republican from Maryland, and Gov. Gretchen Whitmer of Michigan, a Democrat — teamed up to write a bipartisan op-ed, calling on the federal government to send tests, track ventilator shortages and buoy state budgets.

“The coronavirus doesn’t distinguish between red states and blue states,” they wrote in the joint piece, which appeared in The Washington Post, “and neither can we.”

The need for more supplies has become a central issue as the coronavirus has spread, foretelling months of crisis. One model, created by scientists at the University of Washington’s Institute for Health Metrics and Evaluation, predicts that deaths from the virus in the United States will rise rapidly during the month of April, from about 4,000 to almost 60,000, even with the many restrictions on movement now in place. The study suggests that the pace of deaths will eventually slow down, reaching a total of about 84,000 by the beginning of August.

In recent weeks, the president has launched broadsides against Democratic governors who accused him and his administration of failing to adequately supply states with needed medical equipment, while claiming that the federal government has “done a job the likes of which nobody’s seen” in delivering needed supplies quickly.

But governors across the country, from South Dakota to New York, have for weeks pleaded with the administration to produce supplies they say have not arrived. During a teleconference with several governors earlier in March, Mr. Trump heard from several governors who said they were still waiting for masks and ventilators, despite repeated claims from White House coronavirus task force officials that the equipment was on the way.

“The country has really stepped up like I don’t think we’ve seen it in many, many — probably decades,” Mr. Trump told the governors during the call held on March 19. “It’s incredible the way they’ve stepped up. So we hope we can get rid of this thing quickly.”

The president’s tone has changed rapidly as several governors who were concerned about supplies on that call have started to speak out publicly.

At a news briefing with reporters on Friday, Mr. Trump said that Ms. Whitmer, who has been a vocal critic of his administration’s coronavirus response, “has no idea what’s going on,” adding, “All she does is say, ‘Oh, it’s the federal government’s fault.’”

“I want them to be appreciative,” the president said. “We’ve done a great job.”

On Tuesday, Mr. Trump struck a cooperative tone at the White House as he detailed his calls with governors to a group of reporters. Mr. Trump said that he had spoken to Ms. Whitmer and that a field hospital with 250 beds would be established in Michigan.

He also has allies in Republican governors like Gov. Ron DeSantis of Florida, who earlier in March defended the president for instructing states to get ventilators on their own as a chance to cut through federal bureaucracy, and Gov. Greg Abbott of Texas, who spoke positively of the federal response on Tuesday.

Mr. Abbott said that governors in the United States have conference calls once or twice a week with federal officials, including the president, the vice president and Dr. Deborah L. Birx, the lead coordinator of the White House’s coronavirus task force.

“They are constantly — they at the federal level — are constantly working on increasing supplies,” he said. “We are anticipating far greater supplies coming forward.”