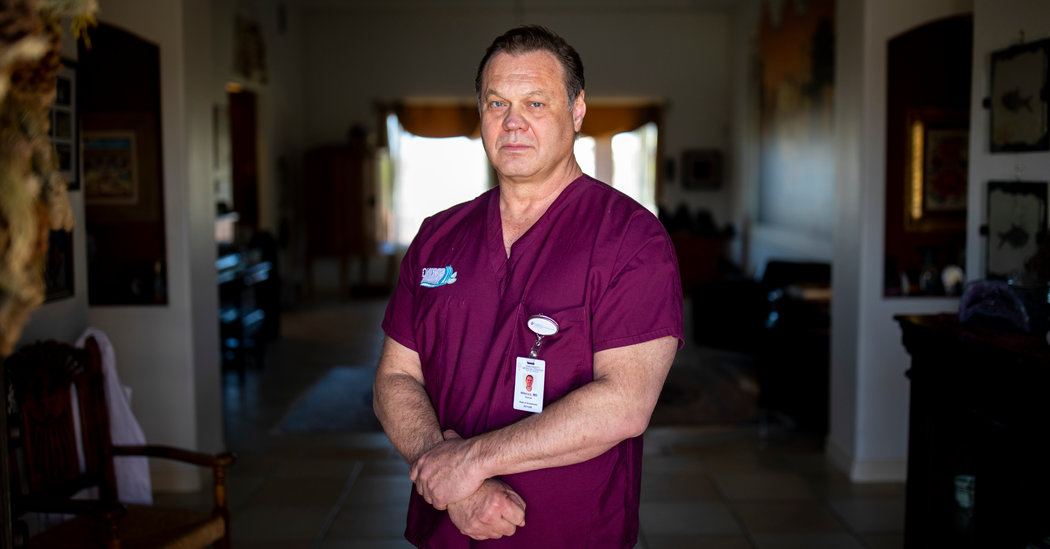 Just after 6:30 on a recent morning, Dr. Henry Nikicicz, an anesthesiologist in Texas, finished an emergency intubation of a man in his 70s who was suffering severe respiratory distress. Then the doctor’s own trouble began.

Stepping out of an elevator after finishing the procedure, Dr. Nikicicz put his respirator face mask back on when he saw a group of people walking down the hallway toward him — reflexively trying to protect himself, and them, should anyone have been infected by the coronavirus.

In the days that followed, Dr. Nikicicz said, he was told that his job was at risk because policy at the hospital where he works, University Medical Center in El Paso, prohibited the use of protective masks in the hallways. “Wearing that mask is essential for me,” Dr. Nikicicz, 60, who has asthma and hypertension, said in an interview.

After he refused to back down, Dr. Nikicicz was removed from the schedule, effectively suspending him from work without pay.

As infection from the coronavirus spreads — and with it, fear — hospitals are facing extraordinary tension between health care providers and administrators. The tension comes against the backdrop of sickness and death for health care professionals, in China, Italy and Spain, and now more than 200 health care workers sick in New York.

Mostly, staff and administrators are fighting over masks, whether they should be worn outside of treatment rooms, and which kind of masks — thinner surgical ones, or heavier respiratory masks. Should they be worn at all times? Only in procedures or while visiting patients? There is also some quibbling over testing and isolation: whom to test and when, and whom to isolate, given limited bed space? Whom to send home if a staff member has symptoms, and whom to require to work?

Some hospitals allow masks outside of treatment rooms and some even make them mandatory. But a number of others say they aren’t necessary at all times and don’t allow them. The Centers for Disease Control and Prevention’s guidance has changed several times. Currently, it says medical professionals suggests masks don’t need to wear masks all the time. It also says that if there’s not enough protective equipment available, homemade solutions like bandannas or scarfs are OK for health care workers to wear.

On Tuesday Dr. Anthony S. Fauci, a leading member of the federal government’s coronavirus response task force, told CNN that the C.D.C. was considering another change: it is reviewing its guidelines on whether the general public should wear masks.

Some doctors believe that hospital administrators are simply trying to protect their institution’s image and don’t want to be seen as a facility where dangerous germs are rampant.

When Dr. Nikicicz insisted on wearing a mask, he received a text from his boss, the chief of anesthesia, accusing him of overreacting. The text read: “UR WEARING IT DOWN A PUBLIC HALL. THERES NO MORE WUHAN VIRUS IN THE HALLS AT THE HOSPITAL THAN WALMART. MAYBE LESS.”

On midday Monday, the hospital confirmed in a statement that “Dr. Nikicicz has been removed from his rotation/work schedule for insubordination.” But then, later in the day, after the hospital was asked for comment, Dr. Nikicicz said he was told by his boss he had been reinstated and could wear a surgical mask around the hospital and an N95 for procedures.

The circumstances leading to tension vary around the country.

An emergency room doctor, Dr. Ming Lin, wrote on Facebook that he was fired on Friday from his job at PeaceHealth St. Joseph Medical Center in Seattle after making public his concerns about insufficient protections and testing at the hospital.

The hospital said it had no comment about Dr. Lin’s dismissal.

Administrators at a different hospital in Seattle, the Cherry Hills campus of Swedish Medical Center, threatened to indefinitely suspend an anesthesiologist, Dr. Oliver Small, for wearing a surgical mask when not directly involved in patient care, such as walking the hallway.

“He got called into meetings with administration of Swedish because they don’t want to panic employees into thinking they need to wear masks for protection,” Dr. Small’s wife, Jessica Green, wrote on Facebook last week. “He is wearing a surgical mask as a precaution in case he is an asymptomatic carrier of Covid, as many people are, and he does not want to risk infection in uninfected patients.”

The hospital asked him to attend a meeting in which administrators told Dr. Small he could take off the mask or stop coming to work, Ms. Green wrote, adding, “What is wrong with our health care system????!!!”

Dr. Small confirmed the story but said that the hospital had since changed its position on masks and that he was “very pleased” by the outcome. Since the incident, the hospital now allows “universal masking” — the ability to wear masks in any patient area.

The hospital said it had no comment about Dr. Small. It said it has changed its policy as “we learn more about this disease.”

“Despite a limited body of evidence showing its effectiveness, and while keeping a strong focus on reuse and conservation, we have decided to implement universal masking as a reasonable strategy, as long as our mask supplies allow,” the hospital said in an email statement.

The intensifying tension falls into a larger context: In recent years, doctors have felt increasingly like employees working for cost-cutting companies putting profit ahead of medicine. That tension appears to have found an almost volcanic moment with the coronavirus pandemic.

“There’s been a loss of autonomy and a denigration going on for a couple of decades now. We’ll take a lot,” said Dr. Christopher Garofalo, a family doctor in North Attleboro, Mass, who holds several regional leadership positions in medicine, including serving as the state’s delegate to the American Medical Association. More than half of physicians now are employees of hospital systems or big groups, he said, a systemic change that has left doctors feeling less empowered and frustrated.

Doctors at a handful of institutions provided communications from administrators that show a face-off with doctors.

An email sent from a midlevel manager at the Cleveland Clinic, one of the nation’s elite hospitals, to a group of doctors warned them not to “go rogue” and wear surgical masks around the hospital. “These are emotional times, and we need to control our emotions,” it said.

Dr. Jim Merlino, a top administrator and the chief transformation officer at the Cleveland Clinic, said the language was “not good communication.”

He also said that while he was aware that some doctors at his institution and around the country were frustrated, he contended the vast majority were not.

“People are afraid and what we have to do is set the record straight: It’s OK to be afraid but let’s accept we’re making the right decisions,” Dr. Merlino said. “We have to tamp the fear down. Otherwise we’ll never survive this.”

He said decisions should be made based on clear scientific evidence. The Cleveland Clinic interprets that current evidence as concluding that it is not necessary to wear surgical masks unless dealing with a high-risk situation.

But other administrators interpret the evidence differently. Stony Brook University Hospital on Long Island just changed its guidelines to require such masks.

“We are now recommending that all caregivers wear a surgical mask with ear loops while at work. This practice should be used in open hospital spaces,” the new guidance reads.