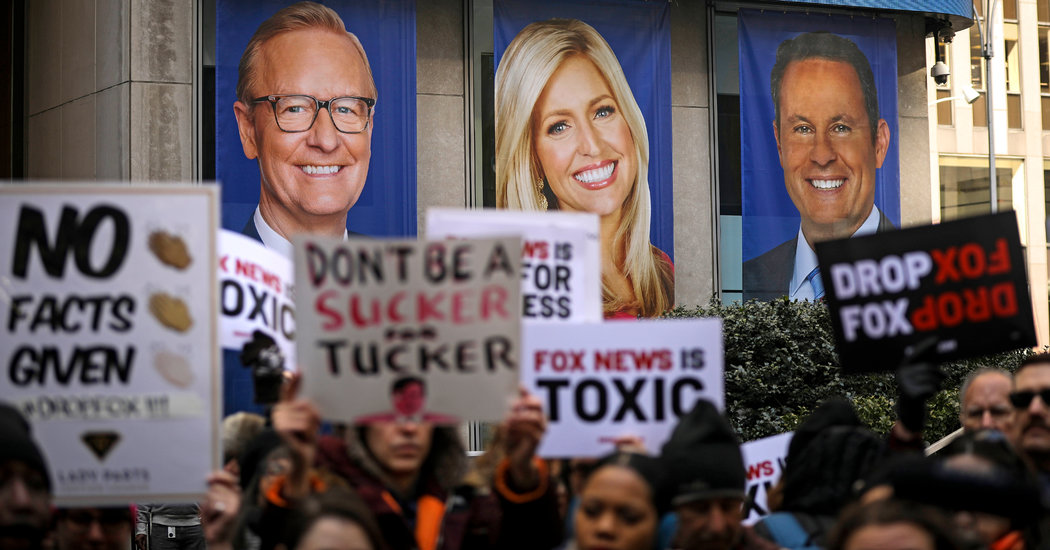 You can relax, Sean Hannity, I’m not going to sue you.

Some people are suggesting that there might be grounds for legal action against the cable network that you pretty much rule — Fox News — because you and your colleagues dished out dangerous misinformation about the virus in the early days of the crisis in the United States. Some might allege that they have lost loved ones because of what was broadcast by your news organization.

But lawsuits are a bad idea. Here’s why: I believe in Fox News’s First Amendment right as a press organization, even if some of its on-air talent did not mind being egregiously bad at their jobs when it came to giving out accurate health data.

And, more to the point, when all is said and done, my Mom will listen to her children over Fox News. One of us — my brother — is an actual doctor and knows what he is talking about. And the other is a persistent annoyance — that would be me.

I’m a huge pest, in fact. “I’m going to block your number, if you don’t stop,” my mother said to me over the phone several weeks ago from Florida, after I had texted her the umpteenth chart about the spread of coronavirus across the country. All of these graphs had scary lines that went up and to the right. And all of them flashed big honking red lights: Go home and stay there until all clear.

She ignored my texts, so I had switched to calling her to make sure she had accurate information in those critical weeks at the end of February and the beginning of March. She is in the over-80 group that is most at risk of dying from infection. I worry a lot.

And, she added, it was more likely that the Democrats were using the virus to score political points. And, did I know, by the way, that Joe Biden was addled?

Thankfully, Mom had not gone as far as claiming the coronavirus is a plot to hurt President Trump — a theory pushed by some at Fox News heavily at first. While she has been alternately appalled and amused by the president, and often takes his side, she is not enough of a superfan to think that he is any kind of victim here.

So, she kept going out with friends to restaurants and shopping and generally living her life as it always had been. “What’s the big deal, Kara? Stop bothering me,” she said over the phone. “You’re the one who is going to get sick, if you don’t stop working so much.”

And with that she was off to another social event, with me unable to stop her since I was hundreds of miles away. That spring break kid was bad, but this was also not good.

I could not lay the blame at the feet of social media this time. No, Facebook was not my mother’s source of misinformation (in fact, the company has been trying to improve in this area). It was not the fault of Dr. Google, which has at least pushed out more good information than bad. And my mom doesn’t use Twitter.

Instead, it was Fox, the whole Fox and nothing but the Fox.

Many children of older parents have come to know this news diet as the equivalent of extreme senior sugar addiction mixed with a series of truly unpleasant and conspiracy-laden doughnuts.

You know all those awful GIFs using a Meryl Streep line from “A Cry in the Dark”: “A dingo ate my baby!”? Well, it sometimes feels like Fox News is eating my mother’s brain.

My brother, a doctor working on the front lines of the crisis in San Francisco, called the misinformation “magical thinking and wishful ignorance” that persists because none of us ever wants to believe the worst. He finds it happens a lot when it comes to dire health information. “If Mom does not want coronavirus to be true, pablum from Fox News makes it easier,” he told me. “It’s classic propaganda.”

It turns out, executives at Fox News HQ were more reasonable behind the scenes. The offices were Lysol-ed and sanitized and employees were given instructions to be safe. All while the network was doing quite the opposite: spraying viewers with far too much fake news contagion.

As The Times media columnist Ben Smith wrote recently: “Fox failed its viewers and the broader public in ways both revealing and potentially lethal. In particular, Lachlan Murdoch failed to pry its most important voices away from their embrace of the president’s early line: that the virus was not a big threat in the United States.”

That would the chief executive of the company that owns Fox News, who took over the job from his infamous father, Rupert Murdoch. It was the patriarch who set the table at Fox, and Lachlan is just an apparently lackadaisical butler of the family business, according to Mr. Smith.

Well, not completely. Lachlan Murdoch did dump a B-team player, the Fox Business host Trish Regan, after she called the media attention given to coronavirus “another attempt to impeach the president.”

In Mr. Smith’s column, Fox’s longtime public relations honcho Irena Briganti said that the virus situation “has evolved considerably over the last few weeks.” Presumably that’s an attempt to use a get-out-of-lawsuit-free card by trying to establish that the story has shifted and so has the news organization.

Mistakes were made, pandemic version.

Given the growing number of cases and deaths in the United States, Fox stopped playing down the crisis, a move that closely tracks the rocky evolution in thinking by Mr. Trump. Fox may also seek cover from some early pronunciations from another powerful Fox host, Tucker Carlson. While Mr. Hannity spun the hoax line, Mr. Carlson was quite firmly in the taking-it-seriously camp, urging Mr. Trump to act.

But back then, Mr. Carlson was a lone prominent voice on Fox, and his more grounded views did not break through to my mother in the early days. In this, Fox failed my mother and countless others of its fans. While we can joke all we want about the “Fair and Balanced” motto, it’s a very low bar to simply give your audience decent health information.

Fox News finally got much more serious in its reporting on the coronavirus, as has Mr. Trump (the My Pillow guy aside). Convinced by experts’ new estimates that millions of Americans would be at risk for infection and hundreds of thousands at risk for dying if he prematurely reopened the country, Mr. Trump and Fox have gone into reverse.

And, to my surprise, as the pandemic has worsened, my mother started to listen to other sources of information, like her children and other news outlets. She’s been sheltering in place at home for at least two weeks and not going out — except to get food and perhaps an ice cream sundae. (“It’s my daily joy,” she said to me, and so I do not argue.)

It was when Mr. Trump and Fox News initially shifted to a story line about getting back to work — even though it was too early — that the problems with Fox really sank in for her. She now seems to realize that she bears some of the burden as a news consumer, though she remains a Fox News acolyte.

So by the time the lieutenant governor of Texas, Dan Patrick, was on Fox on March 23 declaring that the elderly might take a virus bullet for the young people to bolster the country’s economic future — a line that was then echoed through the network — she was having none of it.

She read up. She looked at my charts. She stopped thinking so magically. And, most of all, she decided she wanted a lot more ice cream sundaes.

“Are they crazy? That’s crazy,” she said. “I am not dying for anyone.”

She was talking to me, for sure — but she’s also talking to you, Sean.