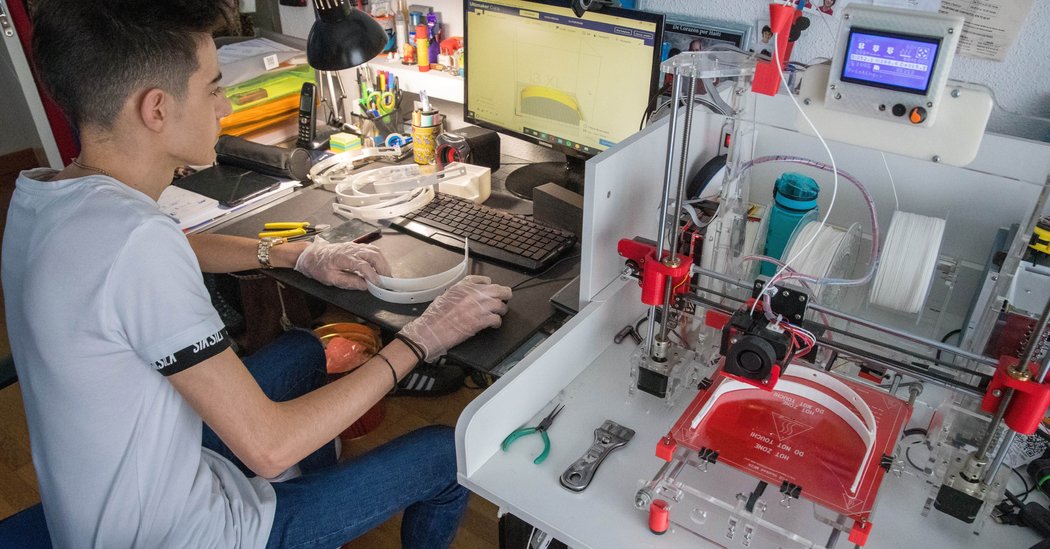 There are moments when Gui Cavalcanti feels like he woke up in a dystopian universe — a guy with no background in medical or disaster response, suddenly leading an international effort on Facebook to design medical equipment to fight the Covid-19 pandemic, the gravest public-health threat of our time.

“I have never worked so hard for a job I didn’t want in the first place,” Mr. Cavalcanti wrote in a text, as part of a recent interview.

Essential medical supplies, from exam gloves to ventilators, are in short supply. In response, and at Mr. Cavalcanti’s prompting, the world’s open-source enthusiasts have banded together to dig up and catalog blueprints of critical do-it-yourself gear and tools that can save lives.

Mr. Cavalcanti, 33, is the founder of the Open Source COVID19 Medical Supplies, a Facebook group that is crowdsourcing solutions to address the diminishing stock of medical equipment around the world. Mr. Cavalcanti, the founder and C.E.O. of MegaBots, a robotics company, initially intended to focus on ventilators. A front-line surgeon in the Bay Area convinced him to go after the low-hanging fruit: sanitizer, gloves, gowns and masks for medical professionals. Stacks of ventilators wouldn’t do the public any good if there were no health care workers to operate them.

The lack of supplies is already dire in many places. Nurses at Boston’s Brigham and Women’s Hospital turned to social media to collect donations of N95 masks. Workers at Providence St. Joseph Health, a network of 51 hospitals across several states, built face shields made with vinyl, industrial tape, foam and elastic purchased at Home Depot and other craft stores. Intensive care units, short of beds, are turning emergency departments into triage centers. Recent reporting by The Times reveals that the United States has only about 160,000 ventilators available — far fewer than what is needed to provide lifesaving treatments in the most critical cases.

While government officials scramble to find a solution, do-it-yourself makers are pressing ahead in what some corners of the internet are calling a medical hackathon.

When Mr. Cavalcanti started the group, he told his fellow moderators that it needed to “grow faster than the virus.”

“We have to reach literally everybody in the entire world, right?” he said in the interview. He laughed at the enormity of the thought.

In just over two weeks, the Facebook group has grown to nearly 50,000 people. Members share their designs or mock-ups for various pieces of equipment, and offer moral support and encouragement.

“You are all what the revolution looks like,” Angus Joseph, 42, in Durban, South Africa, wrote on March 18.

To keep things organized, Mr. Cavalcanti established a subgroup of 130 people who operate on Slack and filter through the information that amasses by the minute, building a catalog of open-source solutions for medical supplies as they go. (Version 1.1 of the guide was released on March 20.)

According to Mr. Cavalcanti, moderators flag designs that are posted in the main group. A team of medical professionals evaluates the flagged content. Then, a documentation group puts the approved information together in read-only Google documents, creating a virtual library that details equipment including exam gloves, face masks, negative pressure rooms and oxygen masks.

Rusty Oliver, an industrial artist in Seattle, was moved to act when he saw the city’s shelves being emptied of hand sanitizer. “The reaction to the coronavirus was like, ‘OK, so these things are in short supply, how do we make them?” Mr. Oliver, 49, said. “That’s, like, instinct.”

He browsed the Facebook group, and a conversation about producing hand sanitizer jumped out at him. People shared articles about distilleries in Oregon that were jumping in to meet the shortage. The World Health Organization has a formula to follow, which Mr. Cavalcanti’s team documents in its sanitizer page guide, making it easier to produce at home.

Mr. Oliver reached out to local distillers to follow Oregon’s lead and join forces. In the past week, several have stepped up, including OOLA Distillery, which quickly collected all the raw materials, from alcohol to storage bottles. The distillery is ramping up to churn out “thousands and thousands of liters of bottles” as early as next week, said Kirby Kallas-Lewis, the founder of OOLA. It will distribute the sanitizer to emergency medical workers, hospital staff and local community members; it also plans to sell it both to individuals and various businesses.

Trevor Smale, an illustrator in Toronto, posted an early illustration of his ventilator design to the Facebook group. The responses prompted him to set up a GitHub page for his project, which he called OpenLung. He is now working with OpenSource Ventilator Ireland, a volunteer organization focused on developing low-cost and open-source ventilators.

Colin Keogh, a co-founder of OpenSource Ventilator Ireland, said that as thrilling as this challenge has been from an engineering and innovation standpoint, he hoped that hospitals would never have to use the equipment they were developing.

“It’s seen as an emergency intervention,” he said. “We hope we’ll be able to cope.”

Outside of the Facebook group, others are organizing efforts to find open-source solutions to the shortage. In Boston, a team of anesthesiology residents at Massachusetts General Hospital grew concerned that it might only be a matter of time before the United States ran out of ventilator machines.

Together, the residents founded the CoVent-19 Challenge, a virtual global contest to increase the capacity of hospitals to provide mechanical ventilation.

“We want people to come with great ideas, and we want to provide them the support that they need to develop something that is compatible with the physiology of the human body,” said Diana Barragan-Bradford, co-director of the challenge.

The CoVent-19 Challenge plans to work with the Food and Drug Administration to get approval on the prototypes submitted to the contest, which opens April 1 and runs through June 1.

For his part, Mr. Cavalcanti sees open-source solutions as a “backstop” for front-line workers who are rigging together personal protective gear. He stressed that it’s important for products and materials to be F.D.A. approved.

For now, homemade fixes are filling the gaps.