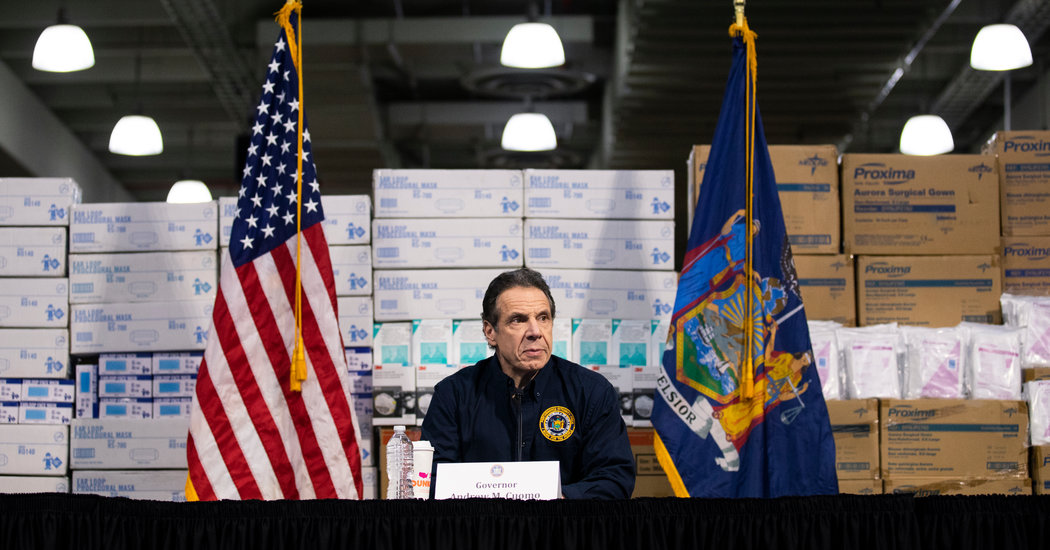 Bret Stephens: Gail, I’m having a weird disconnect. On Friday, I rode my bike all the way up to the George Washington Bridge. The weather was perfect and New York had never looked so glorious. The next day, which was dank and rainy, Donald Trump raised the possibility of quarantining New York, along with parts of the tristate area.

I experience this presidency as a cross between Stephen King’s “It” and “The Truman Show.” Nonetheless, Donald Trump’s popularity is rising. What gives?

Gail Collins: I still adhere to the rule that there is no situation so bad that Donald Trump can’t make it worse.

Bret: If he had been the designer of the Titanic, there would have been fewer lifeboats.

Gail: Or his minions would have forgotten to check for holes.

But even as we’re seeing him flounder, people want to believe they have a leader who knows what he’s doing in this crisis. So it’s not surprising his polls have ticked up.

Although actually Trump’s popularity hasn’t risen all that much considering the intensity of the situation. Certainly nothing compared to what we saw with George W. Bush after 9/11.

Bret: Not a perfect comparison. You can fault George W. Bush in any number of ways, but he did not spend the months before 9/11 repeatedly telling the public that there was absolutely no threat of a terrorist attack on our soil or boasting that he had it all under control, or claiming Osama bin Laden was a liberal hoax to delegitimize his presidency and wreck the economy.

Bret: The inability of so much of the public to remember what Trump was saying just a month ago suggests that, in addition to the coronavirus crisis, we’re also experiencing a national amnesia pandemic.

Hey, maybe as a public service we should briefly change the subject. Have you heard there’s a race for the Democratic presidential nomination?

Bret: Could we have a do-over? Watching Andrew Cuomo’s press conferences in recent weeks, I find myself fantasizing about the New York governor becoming the party’s nominee. Your thoughts?

Gail: Cuomo has an, um, forceful personality. Perfect for the present moment, when he can represent the frightened, beleaguered public. Joe Biden got to be the likely Democratic presidential nominee with the exact opposite aura — the candidate who didn’t drive a large chunk of the voting public nuts.

Bret: Fair point, and if the pandemic is behind us by Election Day, maybe Cuomo’s style won’t wear as well, just as Rudy Giuliani’s wore thin a few years after 9/11. But for the time being, Cuomo is playing the part of the president we wish we had — compassionate, well-informed, firm, but also flexibly responding to changing conditions — as opposed to the irascible, ignorant and self-infatuated president we do have.

Gail: No question Cuomo’s the hero in that pairing. And you could certainly sell tickets to the debate.

Bret: Biden is like the guy in the audience raising his hand and hoping the moderator calls on him. I fear this is an inauspicious beginning for the general election.

Gail: I’m not going to argue that Biden has been a stirring presence. But I was listening to him on TV the other night, and he was pretty clear in what he thought should be happening, policy-wise.

The moments when he really makes contact, though, are the personal ones — talking about having get-togethers with his grandkids where Biden and his wife sit on the porch while the kids sit a distance away on the lawn. Hard to imagine Donald Trump sitting still for that.

And of course Biden relates so intensely to what the country’s going through because of his own history of family tragedies.

Bret: Those of us in lockdown nation definitely could use an empathizer-in-chief. I just went back and looked at the clip of Biden’s interview on CNN, when he spoke about his own extensive experience of tragedy and grief. It was moving and real, the candidate at his best.

Gail: This is not the moment to have a leader whose most stirring emotional experience was firing people on reality TV.

Bret: But here’s my fear: the Biden campaign reminds me a bit of John McCain’s 2008 campaign — minus the Sarah Palin part, of course. McCain started off as the presumptive front-runner, then nearly ran out of gas before making a miraculous primary comeback. But then his campaign sorta just flatlined. In the meantime, he ran as the candidate of character and personal biography, not energy, ideas, and hope. And he got crushed as the country went through the crucible of the 2008 financial crisis.

Gail: I was covering McCain when he crashed and burned. Once the national focus switched over to the economic crisis, he was just sort of lost. He and Barack Obama were at a big bipartisan meeting on what to do next, and McCain didn’t seem to have a clue.

Biden’s not like that. He isn’t a personality-personal-history candidate; he’s a former-vice-president-who-knows-how-the-system-works candidate.

Bret: If Biden is going to make himself more relevant to the moment, I think he needs to do more than emphasize his command of bureaucracy or his experience of personal tragedy. He’s going to need to reintroduce voters to the “Scranton Joe” side of his biography. One reason I suspect Trump is benefiting politically from the pandemic is that he’s been talking about minimizing the economic fallout and getting the country back to work. That might be irresponsible from a medical and epidemiological point of view. But it resonates with millions of Americans, especially small business owners and their employees faced with complete financial ruin if the shutdowns carry on for months. Biden needs to compete with those voters, particularly those in must-win states like Pennsylvania and Michigan.

Gail: How are you feeling about the shutdowns? As it stands now, it’s easy to imagine them going on for months.

Even if New York does hit its peak in April, as the experts are now predicting, it’ll be summer before we’re really back to normalcy. And even then the virus will probably be wreaking havoc in other parts of the country where the contagion started later.

Bret: I’m not averse to the kinds of shutdowns that have been imposed so far, especially in dense urban areas where the risk of mass contagion is so high. I’m not averse to extending them by another three weeks, either, as Trump did over the weekend. We’ve got an urgent health crisis and critical shortages of essential medical equipment, particularly ventilators, so buying some time makes sense.

On the other hand, the idea of a much longer nationwide shutdown strikes me as no less dangerous, potentially more so. The economic damage would be monumental, beyond anything in the power of the government to fix. It runs the risk of creating a secondary health crisis in terms of depression, isolation, suicide, addiction and so on. And even then the virus is going to continue to run its course until we’ve found a vaccine or at least more effective medication.

Gail: You know I’m going to ask you what the alternative is.

Bret: I’m intrigued by countries like Holland and Sweden, which are pursuing a mitigation strategy instead of a suppression strategy. Obviously the jury is still out on what sort of outcomes they’ll have, and perhaps they’ll be terrible. But given that this is a pandemic whose consequences are going to be so far-reaching, I think there ought to be room for a certain amount of variety and intelligent experimentation in terms of response.

Then again, I’m not often in the habit of advocating the Swedish model!

Gail: Having lived through decades of fruitless arguments about why we should emulate Sweden, I’m just going to shrug and cede the point. But go on.

Bret: Can we encourage habits of social distancing without enforcing total lockdowns? Can we have restaurants open but cut their seating capacity by 60 or 70 percent, so customers aren’t so close? Can we focus our efforts on protecting the most vulnerable part of the population, especially the elderly and those with pre-existing conditions, while accepting a heightened level of risk for others?

Gail: God, the idea of going out with friends to a restaurant sounds like a kind of Shangri-La. But it also scares the heck out of me. Maybe I’ve been brainwashed over the last couple of weeks, but given the incredible stress on our hospitals right now, the idea of just taking the risk to see what happens is … unnerving.

Bret: I don’t know. As my very wise mom never tires of reminding me, I don’t have a degree in medicine or public health.

Gail: Loved that column about your mother, by the way.

Bret: Thanks! She liked it too and only wishes I would agree with her more often. (As in: always.) But I was struck by a quote from John F. Kennedy that appeared in a recent Times obituary of the science writer Daniel Greenberg: “Scientists alone can establish the objectives of their research, but society, in extending support to science, must take into account its own needs.”

Gail: Nice, but I don’t think we’re letting scientists run the game. The real decisions are being made by people like — Andrew Cuomo. I’d love to hear you two argue the point out. Winner gets to run for president.