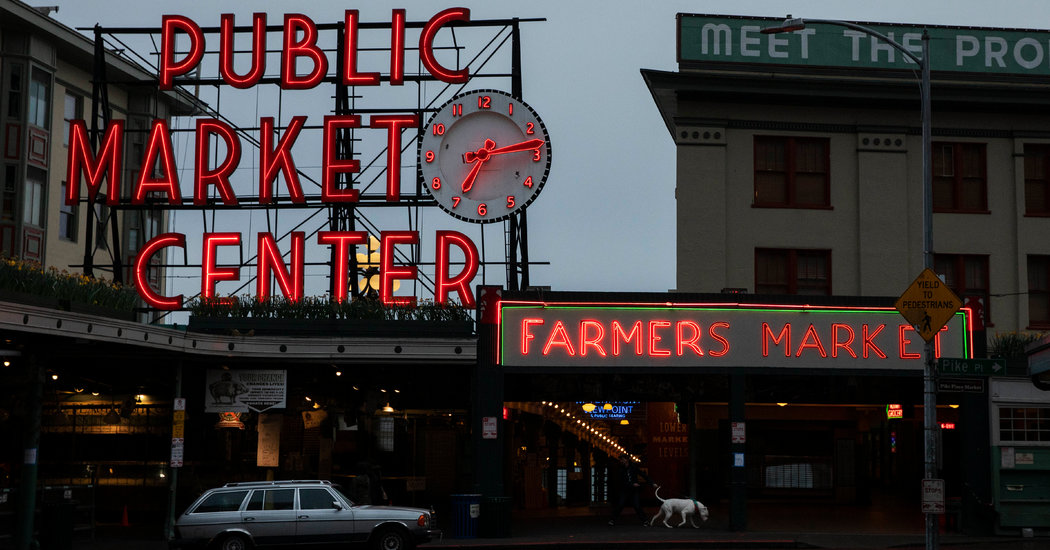 Once you take in that there are hardly any people around, the quiet hits you.

The street musicians are gone. Jonny Hahn, who rolled his piano around various parts of the Pike Place Market for over 30 years, is nowhere in sight. The boisterous hollers of fishmongers tossing whole salmon to one another and the squeals of delighted tourists watching them work no longer echo through the arcade.

Nonessential businesses were ordered to close soon after Washington State’s “Stay home, stay healthy” mandate went into effect on March 23, an attempt to slow the spread of the coronavirus after the region saw the first explosive outbreak in the United States.

The four owners of the Pike Place Fish Company and their employees now work quietly behind a chain-link curtain that keeps them appropriately distanced from the few customers who still venture out.

“It’s a huge family down here,” Jaison Scott, 48, one of the owners, said of the market. “It was really heartbreaking, watching people in tears, saying ‘I have to close,’ one by one by one.” His mother worked at the company before he was born.

Pike Place Market, opened in 1907, is one of the oldest continuously operated public markets in the United States. The community of more than 500 vendors, and about 500 low-income residents, has weathered tumultuous times before, from the internment of many Japanese-American farmers during World War II through financial difficulties and a threat of demolition.

It is a community with a tradition of watching out for its own. Mike Osborn, 60, owner of Sosio’s Fruit and Produce, said that although business had decreased by about 40 percent, he would not lay anybody off.

The dozens of local flower farmers whose riotously colorful blooms normally line table after table during the market’s peak season have been deemed nonessential. So Mr. Osborn has been buying $10 bouquets from the growers and reselling them at his place with a $15 surcharge that he is donating to a program called the Safety Net, set up years ago to help market community members in need.

To ease some of the burden for commercial tenants, the Pike Place Market Preservation and Development Authority provided rent relief for the month of April. A 550-pound bronze piggy bank named Rachel that has been at the market entrance since 1986 collects thousands of dollars annually to help finance the market’s social services.

Mr. Scott of the fish company said he was grateful for the customers who have kept coming: “I think they feel safe coming down here. They say, ‘Oh, I’d rather come here than a grocery store’ because it’s open air. Thank god Federal Express is still going, because they’re picking up our packages every day and shipping them all over the country.”

Lit by the glow from one of the produce stands that remain open, Merrill Maguda, 35, was buying a variety of vegetables. She said she did not like seeing the market so quiet, with so many businesses closed, but “it’s what we need to do at this moment.” “This is my one outdoor adventure every week,” she added, “so I relish it.”

Mr. Osborn said these difficult days are “an opportunity to support a community that has supported you for 110 years.”

Frank Genzale, 72, the owner of Frank’s Quality Produce, whose grandparents sold spinach from their truck at the market in 1929, has been accused of being born right behind Table 47.

“It’s my life,” he said of the market. “You’ve got to love the interaction with the entire world walking by, three feet away from you. A few of us are still here, hanging in there, waiting on our steady customers who stand on the sidewalk and shout out what they want.”

“We’re survivors. The market has seen so many things happen,” he added. “It’s not going to be fun for a while, but yeah, we’ll wake up and say, ‘I’m going to get through today,’ and then we’ll see what tomorrow brings.”