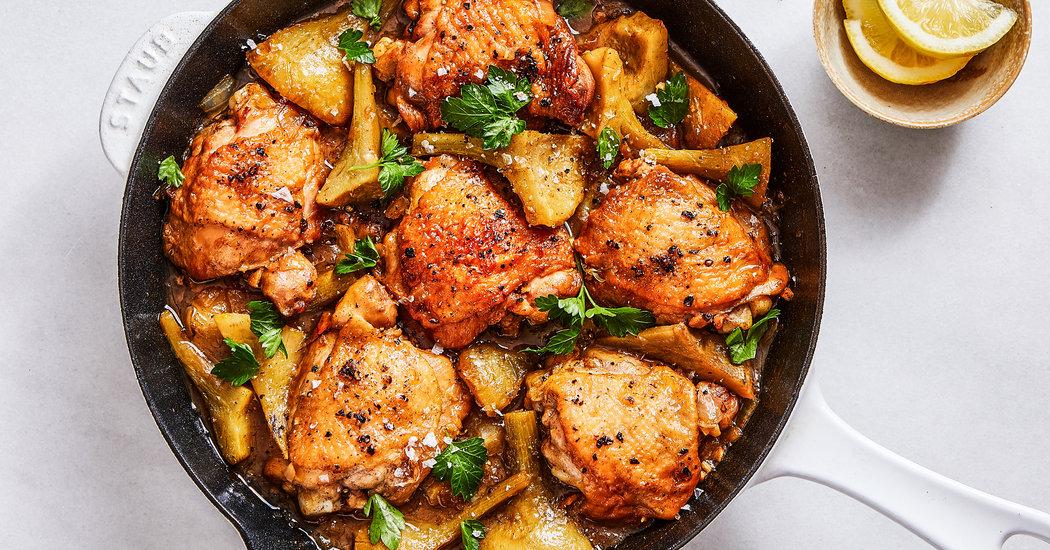 As an artichoke lover, I am always game for a new recipe, especially before Passover when the thorny vegetable is beautifully in bloom.

Recently, I hit the jackpot. At a typical Washington dinner party a couple of months ago, where people often are eager to share recipes, someone at my table, Suzanne Berman, told me about a Passover recipe that her late mother-in-law, Esther Soussan Berman, learned growing up in Morocco. When she described it as golden chicken thighs and fresh artichoke hearts, flavored with saffron and cinnamon, I knew I had to try it.

I went to my kitchen and was not disappointed, and, since I am very familiar with the expertise of the elderly Moroccan cooks in Washington, I was surprised I had not learned about Mrs. Berman before she passed away.

The main courses, all served at once, included, among others, vegetables stuffed with ground meat, a colorful array of cooked carrot, beet and red pepper salads, and, of course, the chicken with artichokes.

Affectionately known as T.T., Mrs. Berman was born in Casablanca, Morocco, in 1932. She immigrated to America in 1953 to join her sisters in Brooklyn, both of whom had married G.I.s stationed in Casablanca. She, too, married an American, Robert Berman, and together they moved to Silver Spring.

Cooking and serving food for her five boys, and later teaching the recipes to her daughters-in-law and her nine grandchildren, was an important part of her life. Mrs. Berman died in 2010, but her recipes now live on in her children’s and grandchildren’s kitchens.

“Grandma T.T. was my inspiration for everything,” Ms. Zakhour said. “I learned everything from her, from cooking to life. When you walked into the house, she would always make you eat — a stranger, a neighbor, a friend … eat, eat, eat.”

This year, the large family will be doing much-reduced Passover Seders with fewer dishes and only close family members. “It is definitely not the way we’re used to doing Passover,” Ms. Zakhour said.

But the chicken dish lives on: It is already in Ms. Zakhour’s freezer, and others will be making it the day of the Seder.

“It doesn’t matter how much food you have or what you have,” Ms. Zakhour said, adding, “With this virus, we also have an unusual opportunity to take the time to appreciate the people who made us who we are.”

Recipe: Chicken With Artichokes and Lemon