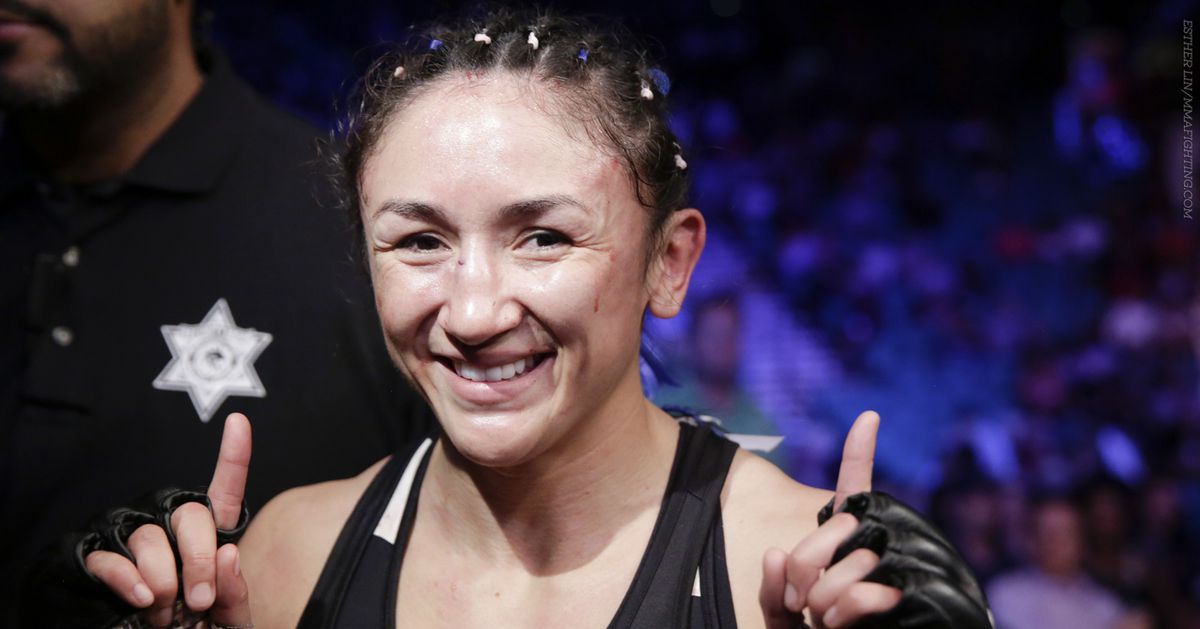 Like all the fighters scheduled on three recently postponed UFC cards, Carla Esparza is disappointed that she won’t get to compete.

The former strawweight champion was just weeks away from her fight against Michelle Waterson at UFC Portland when the promotion was forced to scrap the show along with UFC London and UFC on ESPN 8 due to the ongoing coronavirus outbreak. While she’s had fights cancelled due to injuries and faced opponent changes at the last second, Esparza couldn’t possibly fathom that her next bout would be postponed due to a worldwide pandemic.

“You hope in your career that fights never get cancelled, for whatever reason,” Esparza explained when speaking to MMA Fighting. “Early on, you hope the show doesn’t get cancelled. Later on, you always hope you never get injured or nothing happens like your opponent gets injured. But this is unprecedented and it’s been crazy. Because every single day, every few hours, it was something new. As a fighter, you kept holding out hope that Dana [White] was going above and beyond trying to make it still happen. Things were constantly changing.

“I was still holding hope that it was a month out to my fight and maybe all of this in the world would be figured out by then. But it’s just been getting worse day by day.”

Despite medical professionals stating that it might be several months before the United States and other countries around the globe can return to business as usual, UFC president Dana White is determined to put on fight cards starting with the next show on April 18.

He’s lashed out at the media several times due to concerns raised about promoting an event in the middle of a pandemic where scientists recommend keeping the number of people in groups as low as possible to prevent the spread of the virus.

White has promised that UFC 249 will happen with plans to move forward with the full schedule for the promotion in 2020. For all the heat he’s taken lately, fighters like Esparza not only back up White’s decision but she applauds him for giving the athletes a chance to compete.

“I love what Dana’s been doing,” Esparza said. “I actually sent him a message of appreciation just letting him know that I super appreciate you’re trying to do anything and everything to make these fights happen. I told him I’m staying ready and whatever happens, happens.”

According to Esparza, her reason for wanting to fight goes far beyond the financial motivation that likely affects everyone who didn’t get to perform on those three postponed cards in March and April.

In fact, the 32-year-old veteran routinely plans ahead for a potential catastrophe like suffering an injury that keeps her sidelined for a year. Unfortunately even she couldn’t predict that a virus would cost her an upcoming paycheck.

“It’s definitely hard but I’ve been in this sport a long time. You know that injuries can happen anytime, so I try to be prepared to not work for a year at all times,” Esparza said. “I do kind of plan ahead for a rainy day at all times.

“It’s a little bit tight right now because I just bought a home. I’ve actually paid my mortgage ahead for like six months so I’m not stressing on that so much right now but the heat’s going to start coming on as months and months go by not making any money, especially since I was expecting a paycheck in two weeks’ time.”

Even with planning ahead, Esparza admits the uncertainty that accompanies the coronavirus pandemic is probably frightening for everybody whose job is threatened by current situation plaguing the world.

“I don’t think anybody can really plan for this,” Esparza said. “There’s some people who live week to week, paycheck to paycheck and for us on average we’re going at least three to four months without a paycheck.

“I was supposed to fight in two weeks so I’ve already gone a few months without getting paid. It’s stressful. It’s like how much longer am I going to be out without seeing a dime coming in? That’s definitely super stressful and it’s really hard.”

While missing out on a paycheck definitely stings, Esparza is quick to point out that her motivation to fight again soon goes far beyond her own financial commitments.

After training for several months in anticipation of UFC Portland on April 11, Esparza missed out on fighting, which is ultimately what she loves doing the most.

“This is not just another game of 40 games or whatever. This is our one focus,” Esparza said. “At this level, you’re fighting on average two to three times per year max per fighter, some not even that much. So when you have this fight and this opponent for so long and you’re focused on that and you don’t get to do that. That’s why fighters fight through injuries.

“I would say 90 to 95 percent of the time, fighters are going into fights with some type of injury or something that happens in their camp that’s not ideal but you’re not going to say no because of something like that. This is something you’ve trained and worked so hard for, for so long.”

Esparza says it’s easy to point at money as the only reason why fighters would be willing to compete in the middle of a pandemic but she knows that’s just not true.

“If all of us wanted to just make money, we wouldn’t be putting our health and our bodies through everything we put them through to do this,” she said. “I would go and be an accountant or something.

Because her fight was postponed, Esparza honestly has no idea when she’ll get the chance to compete again but White has promised all of the postponed cards will be rescheduled as soon as possible.

Even though her training has been curtailed due to the current lockdown in California, Esparza would gladly take an opportunity to fight on any of the upcoming cards.

“If they told me they had a fight for me tomorrow, I’d say yes,” Esparza said. “I’m willing and ready for anything that they try to bring along. Even with opponent changes. I’ve never said no to an opponent.

“I’d like to keep the same fight that we had planned because that’s what I’ve been training for, but I’m ready for any opponent or any date.”