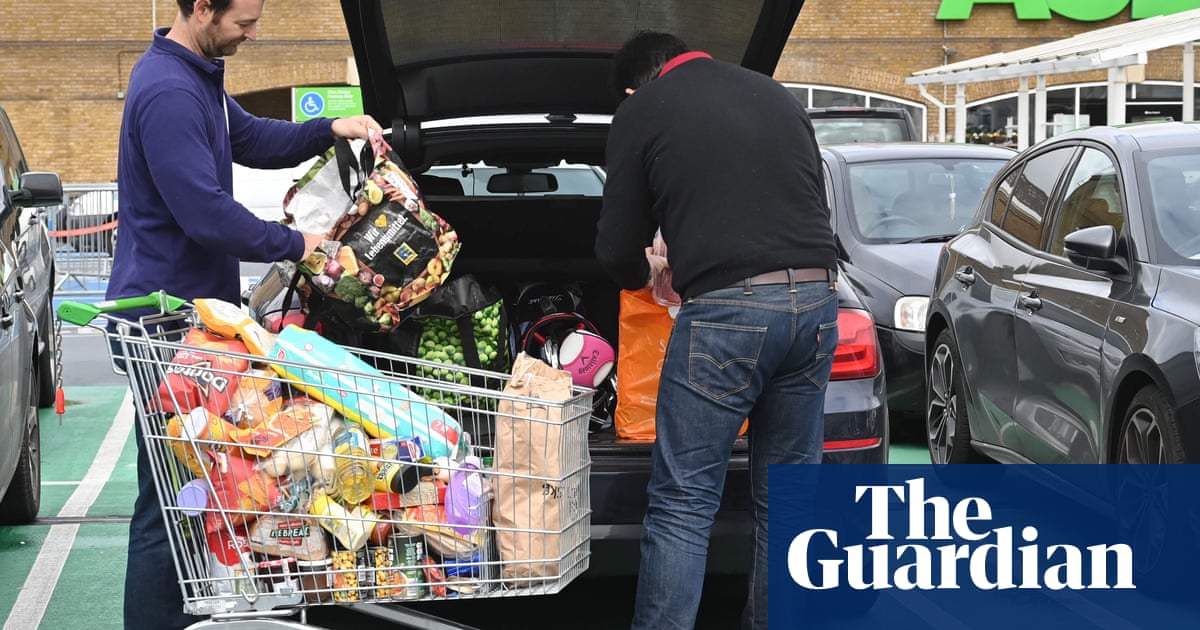 Britons made nearly 80m extra grocery shopping trips in March – spending nearly £2bn more on food and drink than in 2019 – as they rushed to stockpile amid fears about coronavirus.

The leap in sales was particularly marked in the week ending 21 March – soaring by 43% – and before supermarkets and retailers raced to introduce measures such as restricting shopper numbers to ensure “physical distancing”.

Shoppers each made three additional shopping trips during this period, which equates to 79m more shopping trips than the same time last year, and an extra £1.9bn spent on groceries.

Data produced by rival grocery market analysts Kantar also recorded sales up by a fifth over the four weeks “making March the biggest month of grocery sales ever recorded”. Kantar’s Fraser McKevitt said the £10.8bn spent on food and drink over the month was “even higher than levels seen at Christmas, the busiest time of year under normal circumstances”.

The average household had bought an extra £63 of shopping over the past four weeks – the equivalent to adding five days worth of groceries, Kantar said. With restaurants and cafes closed an extra 500m meals and snacks are being eaten at home every week, it said, with the closure of pubs resulting in nearly £200m more being spent on alcohol in stores.

By the week ending 21 March, Nielsen said many shoppers had already stocked up their store cupboards and pantries with essentials, and begun to prepare for the expected lockdown – announced the following week – by filling their freezers as well.

Sales of frozen food during this week rose by 84% compared with the same period last year. This was also the week in which the government announced the closure of pubs and restaurants, resulting in a 67% surge in beer, wine and spirits sales.

Online grocery sales – which usually make up just 7% of the UK’s £200bn grocery market – picked up sharply, with one-fifth of households placing an online order, equal to an additional 1.2m online grocery orders over the four weeks.

Government restrictions on movement, along with relatively full grocery cupboards, would result in a step down in the number of shopping trips in April, Kantar suggested. “Sales of long-life and non-perishable items will slow as households work their way through stocks,” said McKevitt. He expected panic buying to ease as “consumers gain confidence in the retailers’ abilities to maintain grocery supplies and keep stock on the shelves”.

In a sign shopping patterns were starting to return to normal on Tuesday, Aldi said it was lifting a store-wide limit on the number of products that could be bought. Restrictions, however, remain in place for in-demand lines such as antibacterial hand gel, toilet tissue, nappies and long-life milk.

“While we would still encourage people to buy only what they need, product availability in store is good and the move will make it easier for people to shop for vulnerable people and those who are self-isolating,” Aldi said.