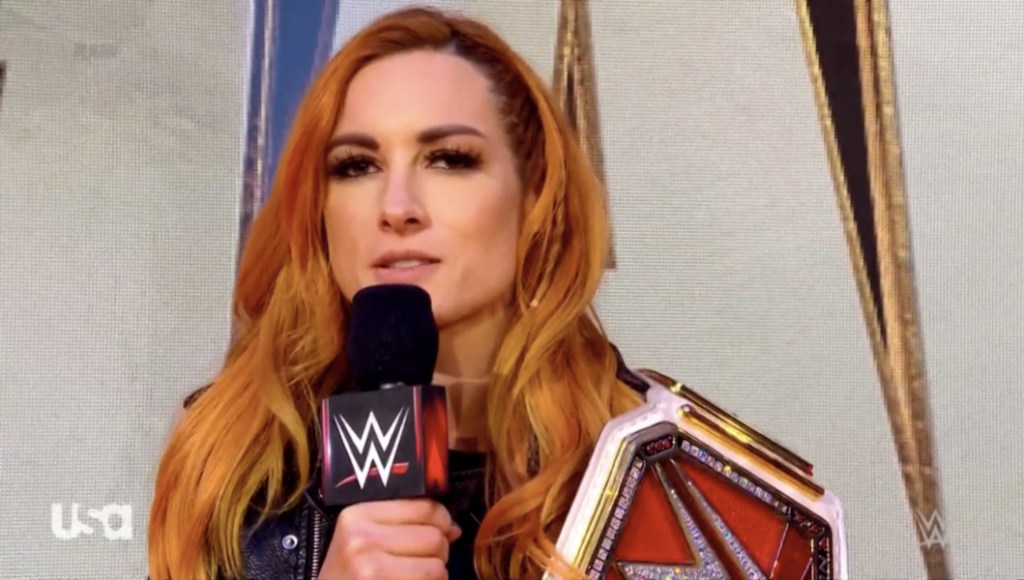 This weekend is WrestleMania 36, whatever that’s going to look like. One match we can count on is The Man Becky Lynch defending her Raw Women’s Championship against Shayna Baszler. Even without a crowd, its bound to be a memorable match full of ruthless aggression and painful-looking submission holds. I don’t think I’m alone in saying it’s one of the matches I’m most looking forward to.

Of course last year, Becky Lynch main-evented WrestleMania 35 alongside Charlotte Flair and Ronda Rousey. This year, her match with Shayna Baszler is not expected to be in the main event. But as Becky explains in a new interview with Sports Illustrated, she’s fine with that:

Am I disappointed? No, I’m not disappointed. Sometimes you’re going to be the main event, sometimes you’re not. I’m somebody that went from the pre-show of WrestleMania to the main event. It’s all about how you react, respond, and keep moving forward. This is also not the last WrestleMania. I’m not retiring tomorrow, there are so many years ahead of me. I’m always thinking about how I can get to the main event. It has to be the right place for it, but that’s always the goal in my mind.

Becky also seems to have a lot of respect for her opponent. Without entirely letting go of kayfabe, she has a lot of nice things to say about Shayna:

There is no denying what Shayna has done. She’s put in the work, she was a pioneer in women’s MMA, long before Ronda came along. She’s someone who went to the independents. She loves wrestling, I know she does. She’s not somebody who said, “Oh, that’s an easy way for me to be on TV. Let me try that because my other sport didn’t work out.” She actually went and trained, did her time on the independent circuit, went to NXT, trained her ass off there, and she was the longest combined NXT Women’s Champion. She has put in the work, and there is no doubt about that. I’m not underestimating her for a second—I think she’s underestimating me. I won’t underestimate the danger of Shayna. She has proven herself in many disciplines, and in NXT. She’s a worthy competitor for the Raw Women’s Championship. I’m going out there to prove I’m better.

She also addresses something fans have been known to focus on: the fact that Shayna doesn’t present herself in the extremely feminine manner of most female WWE Superstars.

When you look back at the past, did Dusty Rhodes look like he could be a WWE superstar? You know what I mean? It’s not about looks. Yes, you need to have a unique look, and, of course, Shayna has that. And you have to have something about you—and Shayna has that, too. There is not a mold to fit into. Maybe that happened for a period of time in wrestling, but hiring people on how they looked was an unsuccessful period of time in wrestling. It’s about the energy you can bring and the heart you have for this energy, male or female. Otherwise, dare I say, you have people who are empty vessels. You need a very specific love and a very specific passion. As to whatever package that comes in, it’s almost irrelevant.

What’s Becky really excited for? Understandably, it’s having crowds back, once the Covid-19 pandemic has receded.

I cannot wait to have people back in the stands. t’s really different without them. You have to really focus on your message, what you want the people at home to understand, and you have to forget about that clarification you get from the audience being there. Having them respond to you is really gratifying, and you know they appreciate what you’re saying. But all of that is gone. I was worried that, without that adrenaline from them being there, I wouldn’t be able to have that same type of intensity. It’s a different thing now, and it forces your brain to think differently.

It’s cool to see what a talent like Becky can do when her brain is forced to think differently, but I think we’re all just as excited for the return of live crowds.