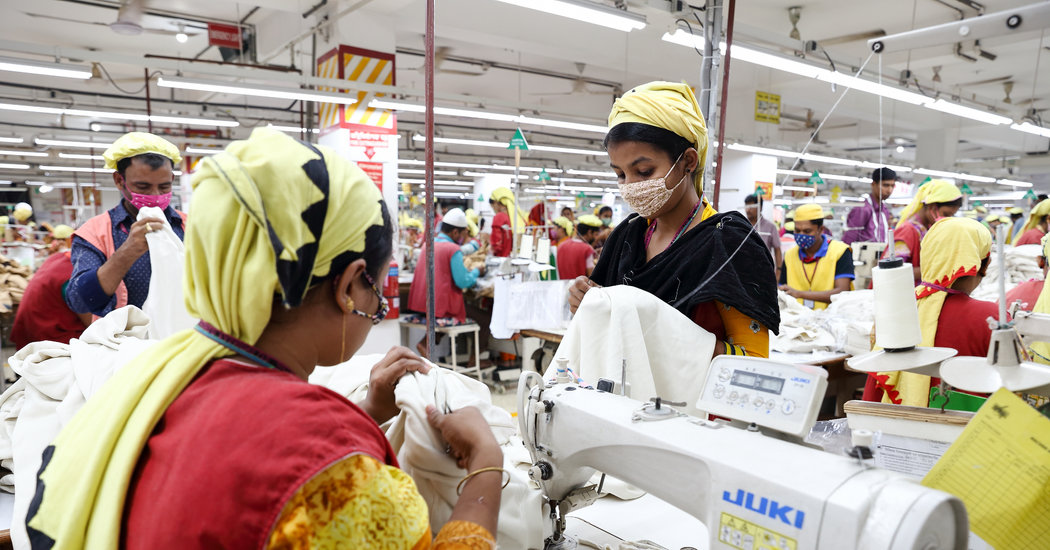 The empty, echoing shopping malls of Western cities are a testament to the biggest crisis borne by global clothing and retail industries in over a generation. But the impact of the coronavirus on retail is a two-part devastation, as the daily flow of thousands of orders placed by Western retailers to supplier factories in South Asia has suddenly slammed to a halt.

Factory owners face financial ruin, while the livelihoods of hundreds of thousands of garment workers hang in the balance.

“Our situation is apocalyptic,” said Rubana Huq, president of the Bangladesh Garment Manufacturers and Exporters Association (BGMEA), which represents Bangladeshi factory owners. “The cancellations and hold instructions coming in from Western fashion retailers are pushing us to the point of insolvency, with massive open capacity and raw materials liabilities.”

Fast fashion retailers rarely own the factories that supply them with their wares. Instead, the vast majority of garment and footwear orders are outsourced to suppliers in emerging markets like Bangladesh, where overhead is cheap and the cost of human labor is cheaper.

Bangladesh, in particular, which has been the site of one of the most effective campaigns of the globalized era to improve labor and safety conditions for garment workers, has seen more than $2.8 billion worth of orders canceled or postponed since the start of the coronavirus crisis, according to Ms. Huq.

Ready-made garments comprised 84 percent of Bangladesh’s total exports, worth $40.5 billion, in its 2019 fiscal year, according to data posted on the website of the BGMEA. This loss compromises the ongoing employment of more than two million Bangladeshi garment workers.

“The situation is very bad. The Bangladeshi supply chain is in complete disarray with many foreign brands acting irresponsibly,” said Sharif Zahir, the managing director of the Ananta Group, which owns seven factories with a total of 26,000 workers. His company supplies brands that include H&M, Zara, Gap, Levi’s and Marks & Spencer.

According to Mr. Zahir, most Bangladeshi factories had already faced losses or thin margins since last year because of government-implemented wage increases in December 2018. Now, many buyers were canceling orders that had been produced, delaying payments and asking for discounts on already shipped goods.

“We have been left with around 20 percent of our orders for April. Beyond that, everything is uncertain,” Mr. Zahir said.

On March 26, the country deployed soldiers and police to enforce the start of a nationwide 10-day shutdown to slow the spread of the coronavirus. The densely populated country of 160 million people is deemed to be at a high risk of increased infections because hundreds of thousands of overseas Bangladeshi workers had returned home in recent weeks, often traveling from virus-affected nations to cramped and closely confined living conditions with little sanitation.

In an indication of the importance of the garment sector, which provides 80 percent of the country’s export earnings, retail factories are currently an essential industry, though the majority are currently closed.

“Factories are likely to empty of orders from April onward and are not in a position to pay salaries to workers. We understand it is a difficult time for buyers but they must understand that garment manufacturers are currently the weakest link,” said Mr. Zahir. “Workers are the responsibility of brands as well. They have better access to liquidity and governments offering much bigger rescue packages.”

A survey of factory owners in Bangladesh by Pennsylvania State University’s Center for Global Workers’ Rights found that millions of workers, mostly women from rural areas, had already been sent home without owed wages or severance pay. According to the survey, nearly all Western buyers refused to contribute to worker wages, and 70 percent of furloughed workers had been sent home without pay.

Big-name retailers have been at pains to stress that the cuts hit all areas of their businesses. After weeks of pressure, H&M said, on March 30, that it would take and pay for the shipments of goods that had already been manufactured for the company, as well as those currently in production. It said it would not negotiate prices on orders that had already been placed.

But the Swedish retailer has also warned that it will have to cut jobs; the pandemic has closed more than two-thirds of its 5,000 shops worldwide and has threatened landlords with the possibility of leaving leases early if sales don’t start to recover.

“We are doing everything in our power in the H&M group to manage the situation related to the coronavirus,” said H&M’s chief executive Helena Helmersson. “My hope is that we will be able to get operations up and running again as soon as possible.”

The vast majority of brands are a long way from similar commitments. Inditex, which owns Zara among other retailers, announced on March 18 that it would temporarily close nearly 4,000 of its stores. The company did not state whether employees would be paid during the closures.

Primark, one of the largest purchasers of garments in Bangladesh, does not sell online. All 376 Primark stores in twelve countries are now closed until further notice, which represents a loss of some $807 million of net sales per month, the company said. It has frozen all future orders.

“The current situation has been so fast moving. We could not have foreseen that over the course of 12 days, our stores in every country in which we operate have had to close,” said Paul Marchant, the chief executive of Primark, last week.

“We have large quantities of existing stock in our stores, our depots and in transit, that is paid for and if we do not take this action now we will be taking delivery of stock that we simply cannot sell,” Mr. Marchant continued. “We recognize and are deeply saddened that this will clearly have an effect throughout our entire supply chain. This is unprecedented action for unprecedented and frankly unimaginable times.”

Although there are now signs from China that some fashion production lines are slowly starting to resume manufacturing, few industry observers are expecting things to get any easier for retailers.

“Though retailers are striving to entice spending with discounting and promotions, or with loungewear at the forefront of marketing campaigns, we expect these to have little impact at present as consumers acclimatize to new daily routines,” said Kate Ormrod, the lead retail analyst at the market research company GlobalData. “Significant fallout across the fashion sector is expected this year as fundamentally weaker players fail to recover once demand finally picks up.”

In a bid to offset some of the Western retail fallout, Bangladesh’s prime minister Sheikh Hasina announced a 5,000 crore Bangladeshi taka bailout worth $590 million on March 25. Many members of the Bangladeshi government are factory owners, but the funds, Prime Minister Hasina said, would be used solely as salaries and allowances for workers.

The challenge now facing the country is not only to ensure that the bailout gets to the right place, but that safety standards do not slip as factory owners find themselves in an increasingly desperate situation.

“It is essential for the government to engage in social dialogue with employers’ organizations and trade unions to come up with practical solutions which will keep people safe and protect jobs,” said Tuomo Poutiainen, country director for Bangladesh at the International Labor Organization.

“Proven social protection measures like supporting job and income security, preventing poverty and unemployment, and strengthening economic and social stability and peace is critical,” he said.

Koen Oosterom, the manager for Bangladesh and Myanmar for Fair Wear, a membership organization paid for by brands to improve working conditions, said that the fashion business faced an “extremely grim and unprecedented” situation, far worse in terms of potential ramifications than the financial crisis of 2008.

“There have been many tough conversations as of late about the sustainability of the industry. This situation is underscoring how unsustainable many of its practices really are,” he said. “Many in precarious work have lost their income and in some areas, people have never been more exposed to exploitation.”

As some fashion retailers fight to stave off bankruptcy in the next few months, there is concern that recent ethical and environmental improvements in manufacturing will be maintained. “Events are playing out in countries where there is very little in terms of social security and labor laws are not always upheld,” Mr. Oosterom said.

And as for the overtures by Western brands and retailers in recent weeks to making masks and hospital gowns for front line medical workers, Ms. Huq said that the change would offer little reassurance or practical solutions for the army of garment workers in lockdown.

“We would need substantial support to change toward those sorts of product lines. The raw materials would have to be sourced and certified, it is stepping toward a totally new type of supply chain,” Ms. Huq said.