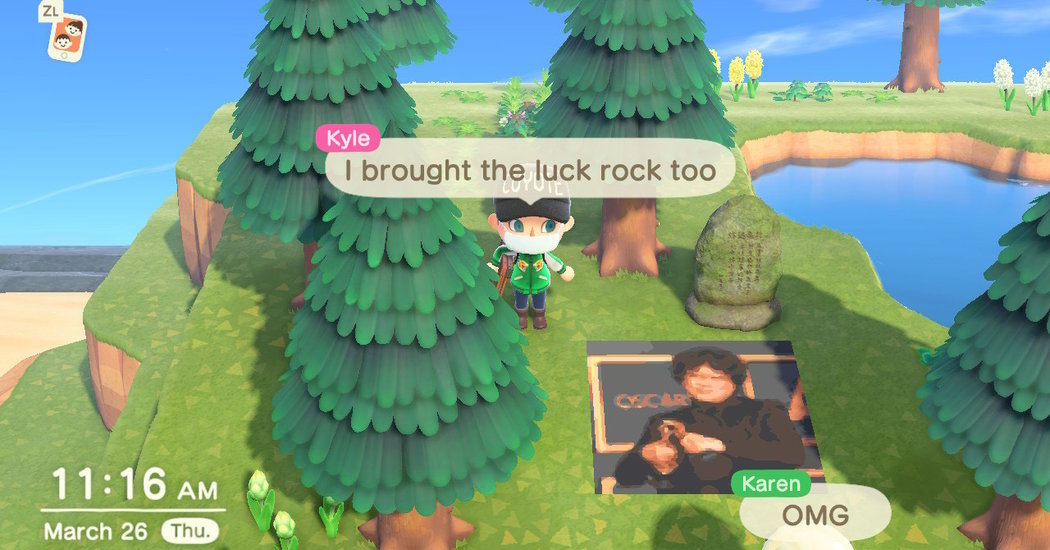 When my parents call me these days to ask what’s new, I have nothing to tell them. I live alone, and I’ve been sequestered in my apartment for almost three weeks. Monday is Wednesday is Saturday.

But when my friend Brian texts me for the latest gossip, I tell him that yesterday, just before midnight, I met a ghost on my island who gave me a bidet.

That sort of unlikely exchange happens all the time in Animal Crossing: New Horizons, a cheerful and funny video game for the Nintendo Switch that has become a social-media sensation in the era of social distancing. The premise is simple: You’re tasked with transforming a small, cartoony island into a bustling village. There is no kidnapped princess or planet on the brink of war, but you get to go outside, which is even better.

With its low-stakes emphasis on making friends and decorating your house, Animal Crossing plays less like a traditional game and more like a lifestyle simulator. You could liken it to “The Sims,” except in that long-running series, you supervise mercurial characters who will throw fits when ignored and even pee on the floor in defiance. (“The Sims” also lets you kill characters off. You’ll want to.)

Nothing is all that urgent in Animal Crossing, where the goals are breezy and can be put off indefinitely. New rooms can be added to your home once you pay off debts to the real-estate baron Tom Nook — a raccoon tycoon who wears Tommy Bahama button-downs — but if you’d rather spend your play sessions gossiping with the island’s bevy of anthropomorphic animals, go right ahead.

You’re encouraged to check in with the game every day, since the island runs in real time: 3 p.m. in real life is 3 p.m. in the game, and different events are possible depending on the time or even the day of the week. That sort of sustained commitment is why I had resisted previous installments in the Animal Crossing franchise: As I grew out of my teenage years, I preferred shorter games that would more easily slot into my busy life.

But now that we’re all trapped inside by the coronavirus, time has slipped off its hanger and lies in a heap on the floor. Why not spend a half-hour every morning — well, I always say it’ll be a half-hour, and then suddenly it’s dinner — in the company of some charming cartoon characters on my digital island?

I downloaded Animal Crossing: New Horizons on a recent Friday night and named my island Akbar, in honor of the neighborhood bar my friends and I frequented before the quarantine. One of my fellow island-dwellers, a small cat named Rudy, greeted me with a present: “This denim hat,” he told me, “is so Akbar.” How did he know?

Over the next few days, the game became a balm. Whenever the crushing tonnage of real-world news was too much, I would check into Akbar, where I could simply collect shells on the beach, watch a meteor shower or encourage a teal squirrel named Nibbles to pursue her dreams of pop superstardom. Right now, it helps to look for the little pleasures wherever you can find them, and Animal Crossing is packed full, each precious incident serving as a bite-sized mental-health break.

Slowly, the island became a digital substitution for my real life. The photo app on my phone filled up with Animal Crossing screen captures instead of events I’d actually experienced, and though my friends still couldn’t meet me at the real Akbar, they could visit my island simply by connecting their Switches to the internet. I started to worry less about the state of my real-world apartment — why bother putting my shoes away if there’s no one coming to visit — and instead found joy in rearranging the rooms of my video-game house before inviting someone to my island to behold it.

That home can be decorated by crafting new furniture or buying swatches of wallpaper from the island’s local store, though my living room is still very much a work in progress. The wall is striped yellow, the carpet is polka-dot, and most of the furniture is coated in the color of Pepto-Bismol. Transposed to real life, the room would either be eye-searingly hideous or irresistibly Instagrammable, but I love to show it off, just as I love to visit other people’s islands for company and inspiration.

After flying to my friend Karen’s island this weekend, she quickly led me to her prize possession, a bed carved into a gigantic, champagne-colored clamshell. (Has there ever been anything so luxurious?) The discovery that you could scan real-world pictures into the game unlocked a further level of customization: I built a hilltop mural of the “Parasite” director Bong Joon Ho holding two Oscars, while my friend Carder decorated his living room with mug shots of arrested Real Housewives.

The digital desire to keep up with the Joneses adds an interesting jolt of class tension to Animal Crossing, and as I started earmarking ever more elaborate furniture to buy, I stumbled on an island bedecked with some of the most expensive items in the game. The houses were straight out of Williams-Sonoma, the beaches were filled with enough toys to satisfy even the most pampered celebrity child, and clothing shops had been built there, which Tom Nook never told me about. Had Animal Crossing opened an outpost in the Hamptons?

My friend told me that instead of playing at the game’s normal pace, where big events are often gated off until you reach a certain day, he kept changing the time and date in the Switch’s internal software, skipping ahead one day, then two, then many more until he finally amassed enough to live in the lap of luxury. In the Animal Crossing community, that controversial move is called “time-traveling,” and while not technically illegal, it’s sort of like listening to a podcast on double speed or pouring a glass of Soylent for dinner: You get the same nutrients, but where’s the fun?

Of course, I understood the impulse behind it: At a time when no one knows how long we’ll continue to be kept in our homes, who wouldn’t seize the chance to exert a little control over the future? But it’s exactly that uncertainty that encourages me to take Animal Crossing at its own pace. If the real world continues to get worse before it gets better, then at least I’ve preserved a miniature escape to help get me through it.

So the beaches of Akbar remain underdeveloped, my kitchen still lacks a refrigerator, and Nibbles is not yet the pop star she dreams of being. Does any of that make me anxious? Nah. Right now, I’ve got time.