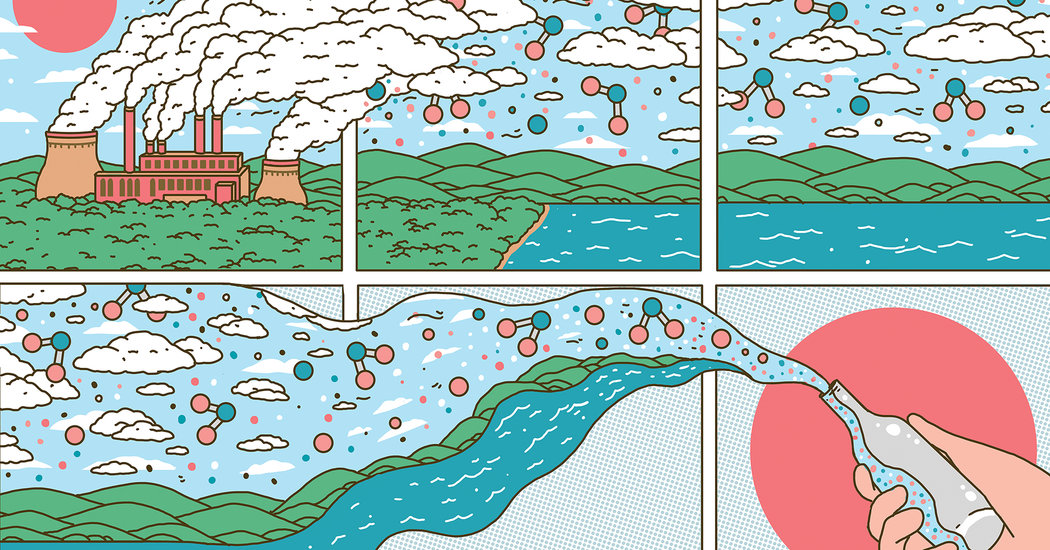 In 2017, Stafford Sheehan handed a friend an unusual bottle of booze. He had made it himself — but not the usual way. A chemical physicist, Dr. Sheehan had invented a process to make alcohol from carbon dioxide, the greenhouse gas associated with climate change, not cocktail hour.

“I said, ‘Hold on, you made this from carbon dioxide?’” recalled his friend, Gregory Constantine, who worked in marketing for Smirnoff. Now the two are in the vodka business, using Dr. Sheehan’s technology and marketing it as a way to fight global warming.

Their company, Air Co., was one of 10 finalists for a pair of $7.5 million prizes to be awarded this year to the teams that can devise the most profitable use for carbon dioxide, which causes global warming by trapping the sun’s heat when released into the atmosphere by power plants, cars and industry. The five-year competition, the Carbon X-Prize, was designed to create a financial incentive to capture carbon dioxide and use it profitably, instead of releasing it.

However, just as the Brooklyn vodka makers — along with the nine other finalists from as far afield as Nova Scotia (stronger concrete), India (an ingredient in pharmaceuticals) and China (a plastics replacement) — were approaching the finish line, the competition has been delayed by the coronavirus crisis.

“There’s a lot of upheaval,” said Marcius Extavour, a Canadian physicist who leads the energy team for the X-Prize Foundation, which in the past has offered multimillion-dollar awards for everything from building reusable manned spaceships to creating water from air. “We’re still rolling with the punches.”

The unusual contest offers a reminder that even as the world focuses on the coronavirus, slower-moving crises like climate change continue to fester, Dr. Extavour said. The past decade was the warmest ever, and polar ice caps are melting six times faster than in the 1990s.

The virus crisis also shows the risks of waiting for a problem to get out of control before taking adequate steps to deal with it, he said. “This prize is an exercise in trying to get ahead of the curve,” Dr. Extavour said.

Rather than focus on ways to reduce greenhouse gas emissions, such as renewable power, the prize came at the problem from the opposite direction: It set out to create financial incentives for companies that produce a lot of carbon dioxide to hang on to it, rather than releasing it. Doing so is technologically feasible, but it doesn’t typically generate any revenue.

To claim the prize, sponsored by NRG Energy and a coalition of Canadian oil sands companies, each of the 10 finalist teams were by now meant to begin transporting their equipment and personnel to two sites, one in Calgary and the other in Gillette, Wyo., to show their projects in operation and produce data backing their claims.

But the three teams based outside North America — from India, Scotland and China — are now blocked from flying to the United States and Canada, and the American teams that were supposed to go to Calgary are likewise blocked from crossing the border.

Dr. Extavour said no final date has yet been set for the rescheduled final round of the competition. That puts the teams competing for the money in a tough position, delaying their chance to get the attention of potential investors or clients.

“We need to be able to take that massive foghorn that is the X-Prize,” said Rob Niven, founder of CarbonCure, the Nova Scotia-based company that is among the finalists.

Back in 2005, Mr. Niven, then a master’s student at McGill University in Montreal, attended a United Nations conference on climate change being held nearby. There, he heard representatives from Pacific Island states talking about losing not just their land to rising seas, but also their history and identity. “It was just crushing,” he recalled.

Mr. Niven wrote his thesis on how to turn carbon dioxide into concrete and, after he graduated, decided to take the 10,000 Canadian dollars he had left in unspent student loans, follow his girlfriend to Halifax and try to turn his idea into a business.

The first year was horrible. “Everyone thinks that you’re wasting your time,” Mr. Niven said. But he got a break when a local concrete company agreed to let him into its plant to experiment with how to apply the technology in practice.

“That’s just a crazy enough idea that it might work,” Mr. Niven recalled the plant owner telling him.

After some tinkering, Mr. Niven found an approach that let him retrofit existing concrete plants in a way that lets them use less cement — the most expensive and also carbon-intensive component of concrete — by injecting carbon dioxide near the end of the manufacturing process. The company has raised money from a venture-capital fund whose board is chaired by Bill Gates.

His hope was that winning the prize, or at least putting up a good showing, might help him scale up the process faster. “At this rate of growth, we’re not going to matter,” he said. “We’re trying to solve climate change. We don’t have time to goof around.”

Another competitor, Dimensional Energy, owes it existence to Jason Salfi’s decision to leave his skateboard company.

Mr. Salfi founded a company called Comet, which made skateboards from environmentally-friendly materials such as sustainably forested hardwood. In 2014, he left to work for an organization run by New York State whose goal was to help researchers turn ideas for clean energy into businesses.

In 2016, Mr. Salfi came across separate applications from two researchers at Cornell, in Ithaca, N.Y., both of whom were working on ways to turn carbon dioxide into energy. He realized that each researcher had a part of the puzzle that the other needed, and neither had time to run a business. And he had heard about the X-Prize, with its $20 million purse.

“I said, ‘Wow, we’re all in Ithaca,’” Mr. Salfi recalled, and proposed they work together. “Really the main operating principle was, let’s set this business up and compete in the Carbon X-Prize.”

They founded Dimensional Energy, with Mr. Salfi as chief executive. The technology uses concentrated sunlight to turn carbon dioxide into industrial energy sources like syngas, which is used to produce jet fuel, diesel and other liquid fuels.

“We mimic natural photosynthesis,” Mr. Salfi said. “We take sunlight and carbon dioxide, and turn it into what becomes industrial nutrients.”

Still, when it comes to sheer marketing potential, the other competitors may struggle to match Air Co.

After Dr. Sheehan and Mr. Constantine joined forces, they needed to scale up, eventually building a 2,500-square-foot facility in the Bushwick neighborhood of Brooklyn, an area full of artists and industrial spaces. Getting the permits alone took almost two years.

More important, though, they had to show that their vodka actually tasted good. Air Co. entered its vodka in a blind taste test at last year’s Luxury Masters competition and won a gold medal. One panelist said he loved the texture, “which had a little viscosity.”

Mr. Constantine said that more than 60 venues in New York City have signed purchase agreements to buy their vodka. Of course, the coronavirus crisis has put that business on hold, with bars, restaurants and retailers shutting down.

In the meantime, he and Mr. Sheehan are putting vodka production on hold, instead using the alcohol they make for hand sanitizer to help slow the spread of the coronavirus. Mr. Constantine said they plan to produce 1,600 bottles’ worth. “We’re actually out of product at the moment,” Mr. Constantine said.