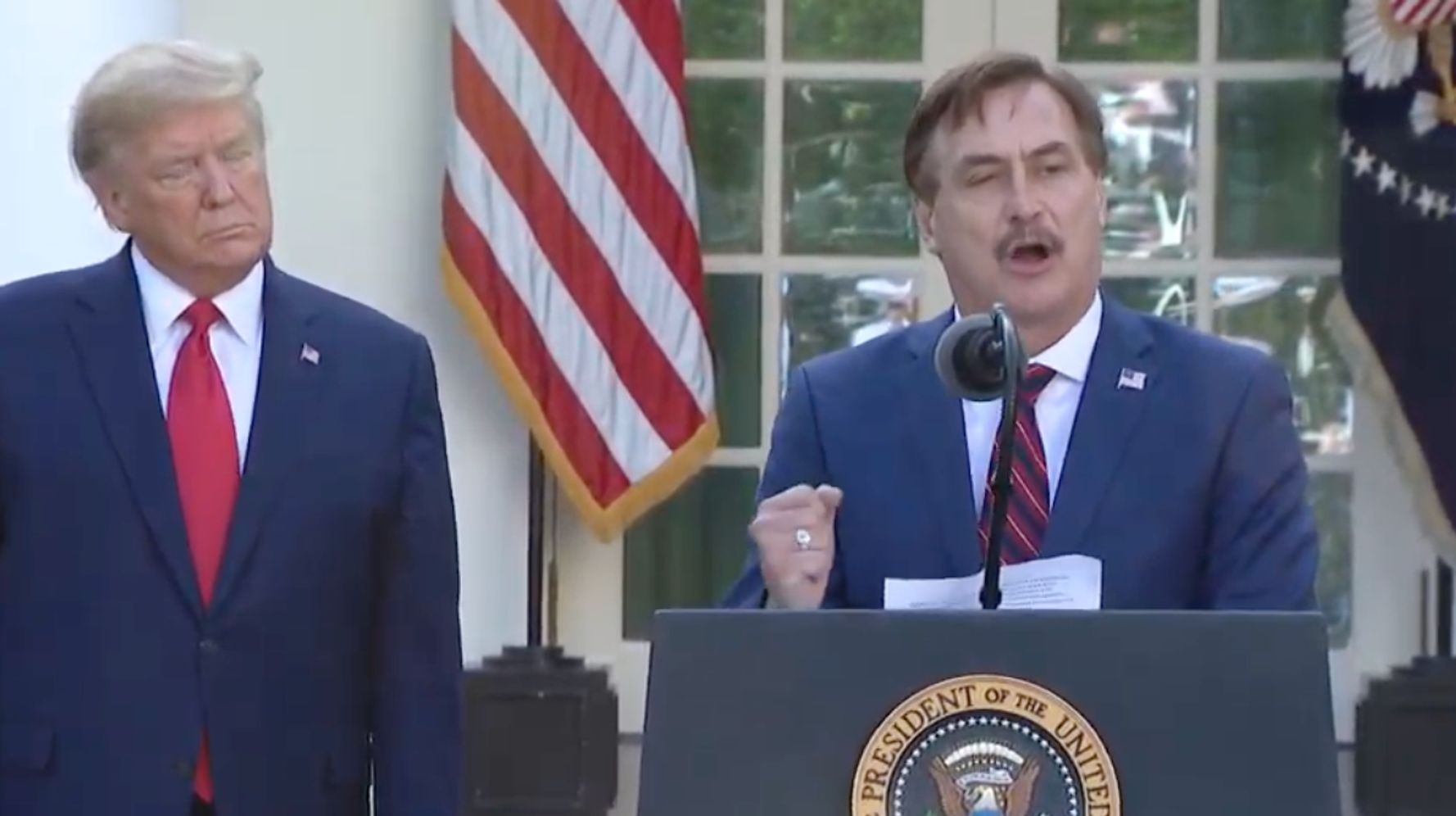 During the briefing — meant to inform Americans about COVID-19, the disease caused by the coronavirus — Trump handed the podium to several CEO’s of private sector companies to tout their efforts to produce sanitizer, masks and other gear for workers amid the pandemic.

MyPillow CEO Lindell said his bedding company would be dedicating 75% of its manufacturing to producing cotton face masks, aiming to get up to 50,000 a day by end of this week. He then said he would read something he wrote “off the cuff.”

“God gave us grace on Nov. 8, 2016, to change the course we were on,” Lindell said, referring to the day Trump was elected. “God had been taken out of our schools and lives. A nation had turned its back on God.”

“And I encourage you to use this time at home to get back in the ‘Word,’ read our Bibles and spend time with our families,” he added, touting “our great president” and “all the great people in this country praying daily” as key to getting through the pandemic.

After Lindell finished his remarks, he went to shake Trump’s hand, but the president, observing a social distancing practice he had been ignoring earlier this month, did not reciprocate. When Trump took back the podium, he said he “did not know he was going to do that, but he’s a friend of mine and I do appreciate it.”

HuffPost did not immediately get a response from the White House for comment.

The U.S. currently has the highest number of confirmed COVID-19 cases of any nation worldwide, with more than 155,000 reported as of midday Monday and more than 2,400 people dead. States and hospitals across the country have been struggling to test, treat and support the ballooning number of people with the illness.

Governors have continued to call out a lack of critical medical equipment, such as ventilators, and hospitals and health workers report a shortage of personal protective equipment (PPE) they need to stay healthy while treating patients with the virus.

After hyping his company for a few minutes, Mike Lindell, the founder of MyPillow, says “God gave us grace” by electing Trump.

This is for some reason happening at a White House briefing on the coronavirus that has killed thousands of people in the U.S. pic.twitter.com/CmjAG1mP8o

Others at Monday’s briefing included executives from tech company Honeywell, which intends to produce N95 masks in new facilities; sleepwear company Jockey International, which is donating scrubs to New York doctors; and Proctor and Gamble, which will make hand sanitizer.

The president cued up the speakers by saying: “We’re gonna introduce you to some of the greatest business executives in the world today.”

Earlier this month, Trump also used a White House briefing when he was still downplaying the potential threat posed by the coronavirus to praise various corporations and turn the microphone over to their executives.

In Lindell’s “off the cuff” remarks on Monday, he complimented Trump for “just a few short months ago” having the “best economy, the lowest unemployment, wages going up” in the U.S.

Earlier this month, a record 3.3 million Americans applied for unemployment benefits in one week — more than quadruple the previous record set in 1982 — as businesses nationwide were forced to shutter to combat the further spread of the coronavirus.