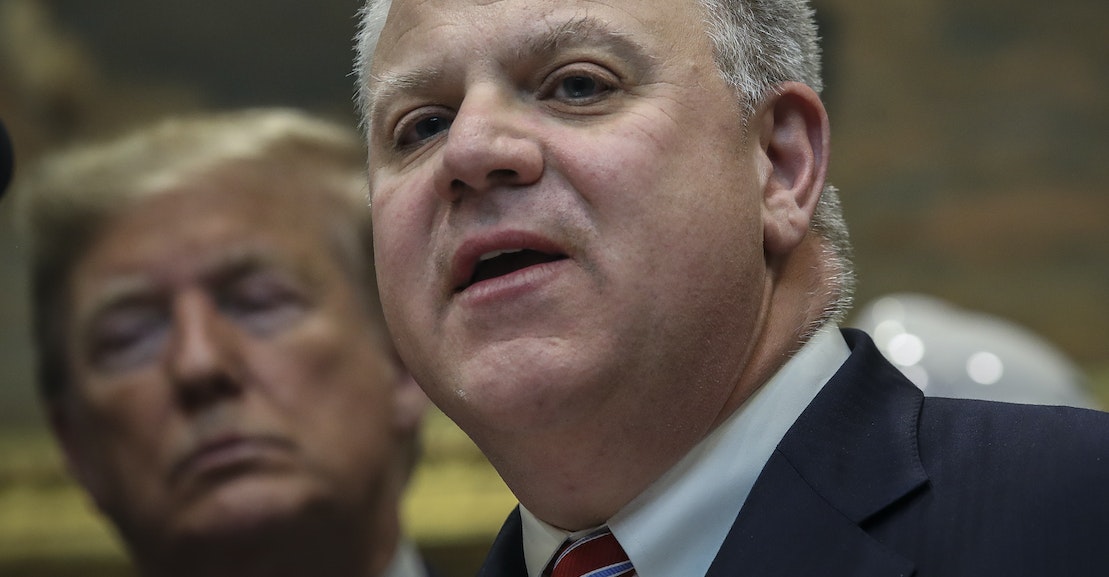 On Saturday morning, as hundreds of tribes were mobilizing their emergency responses to the coronavirus, a shock wave reverberated through Indian Country: Mashpee Wampanoag Chairman Cedric Cromwell announced that Darryl LaCounte, the director of the Bureau of Indian Affairs and a citizen of the Turtle Mountain Band of Chippewa Indians, had called him with the news that Mashpee land would be taken out of trust, effectively terminating the tribe’s legal claims to sovereign land.

Even against the backdrop of a pandemic, it cannot be overstated how alarming this is. Four centuries ago, the Mashpee welcomed the violent Pilgrims onto their land, and they have been fighting for federal recognition, tribal sovereignty, and the return of their land for decades. After finally obtaining federal recognition in 2007, the Mashpee believed that sovereignty and land rights would soon follow, which seemed true when the Department of the Interior approved the tribe’s land-into-trust application in 2015. “This road to establish sovereign territory in Mashpee and Taunton has been a long one,” Cromwell said at the time. “But we now have a decision.” But in a matter of five years, a lawsuit, a new president, and an archaic legal system would rob them of all of it.

The Mashpee decision being handed down by the White House as the entire nation remains singularly focused on staying alive was likely no accident. America has often used emergencies to blanket its land theft. A year into the Civil War, President Lincoln waged war on Dakota lands after the tribes revolted due to the federal government failing to uphold its treaty responsibilities and deliver food and goods to the tribal nations. In April 1863, Congress passed the Dakota Removal Act, a law that legally removed and barred tribes from Minnesota and stands to this day. As the war dragged on, the American government turned its eye to Diné lands in the Southwest, carrying out the forced removal and attempted ethnic cleansing of the Navajo Nation. The Interior’s most recent retraction is just a painful reminder of that history—and the fact that there is no such thing as a “postcolonial” society. The optics and justifications may have grown more sophisticated, but that’s about it.

The crisis currently faced by the Mashpee stems from the current administration and a 2008 Supreme Court decision. In that case, Carcieri v. Salazar, the justices found, based on American laws drafted in the 1930s to legalize the forthcoming termination era, in which the federal government sought to dissolve tribal nations and assimilate Native citizens, the Interior cannot take land into trust on behalf of tribal nations unless they were federally recognized in 1934. This prompted some state-recognized tribes, like the six nations in Virginia that were federally recognized in 2018, to pursue recognition and land by way of Congress. The Virginia tribes were able to achieve this by relinquishing their ability to open and operate a casino on their returned lands. The Mashpee have not agreed to such concessions and have planned to open a resort since gaining recognition. Which is where the president comes in.

President Trump doesn’t give a shit about Indian Country, either now or throughout his life before the White House. In 1993, Trump—upset that one of his casinos was floundering—infamously railed against the Mashantucket Pequot Tribe in court, saying, “They don’t look like Indians to me.” Since assuming the presidency, his tone hasn’t much changed. Where President Obama fulfilled his promise to meet with tribal leaders every year, the Trump administration has felt no such compulsion to establish true government-to-government relationships. Trump’s Interior Department has sold off land to gas and oil companies and fought tribe-led efforts to protect sacred sites. From his first week in office, Trump has backed pipelines that cut through sovereign land. His administration underfunded its delayed response to the Missing and Murdered Indigenous Women’s crisis. The list of bad faith and open malice is long here.

And while it helps to explain the president’s antipathy, the most obvious factor appears, unsurprisingly, to be the standard, open-air grift that this administration has perfected. As the Providence Journal reported last year, “The [Mashpee casino] site is about 18 miles from Rhode Island, and the state’s politicians aren’t keen to have a new competitor go up against their two casinos, both of which are run by Twin River Worldwide Holdings, a public company with strong Trump ties.”

Last year, Representative Bill Keating, a Massachusetts Democrat, introduced a bill in Congress to take the Mashpee land into trust—the legislative end-around that the tribe needed to establish itself as a sovereign entity. But Matthew Schlapp, a lobbyist hired by Twin River and husband to the White House’s strategic communications director, reportedly convinced the president to publicly oppose the bills on the day of the vote, temporarily spiking them, as well as a piece of legislation known as the Carcieri fix that was sponsored by Republican representative and Chickasaw Nation citizen Tom Cole. Both Cole’s and Keating’s bills eventually passed the House, but nearly a year later, the Senate has yet to vote on either, leaving the status of the Mashpee at the whims of the Interior—or Trump and the other grifters whispering in his ear.

Reacting to the land termination, Keating, who sponsored the land trust bill, called the move, “cruel and nonsensical.” Senator Bernie Sanders issued a statement condemning the Trump administration and echoed Senator Elizabeth Warren’s standing call for a clean Carcieri fix. These are helpful, if standard, rebukes of a long-standing American tradition.

But last week, I had a chance to speak with Representative Deb Haaland, a Pueblo of Laguna citizen and one of just four Native members of Congress. Initially, the interview was focused on protecting Native elders from the coronavirus, but the conversation soon turned to history. And while the news of the Mashpee land rescission hadn’t broken yet, I found myself returning to something she said for perspective on the issue. “It’s hard not to think about the disease that came when the Europeans came to this continent—the smallpox-covered blankets that they delivered to tribes to purposefully destroy entire communities,” Haaland said.

When I brought up the White House’s inadequate pandemic response proposal and asked about the frayed relationship Trump has with Indian Country, the Congresswoman said, “We know how President Trump feels about Native Americans…. He doesn’t like Indians. It’s plain to see.” It was then, and it is now.