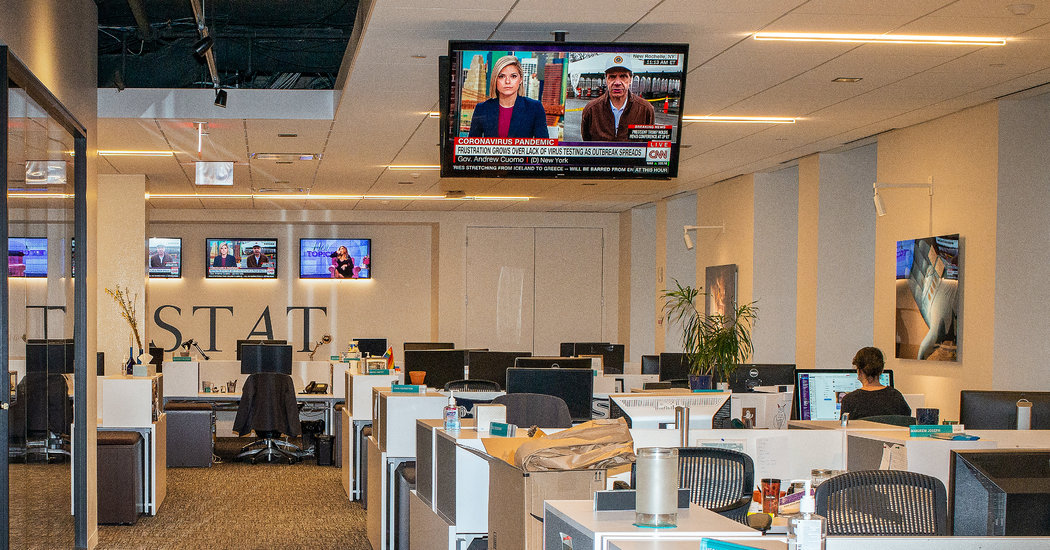 On New Year’s Eve, Helen Branswell, a reporter at the science and medical news website Stat, was finishing an article about the development of an elusive Ebola vaccine when she got an inkling of her next big story.

“Hopefully this is nothing out of the ordinary,” she wrote on Twitter, adding a link to a report of an “unexplained pneumonia” in central China.

Two days later, she tweeted a South China Morning Post article about the outbreak and wrote, “Not liking the look of this.”

Stat published Ms. Branswell’s first article on the “growing cluster of unexplained pneumonia cases” on Jan. 4. There was some indication, she reported, of “a new virus, and perhaps even a new coronavirus.”

Stat, a digital publication in Boston founded in 2015, was early to a story that would dominate the news. In January, a month before the first confirmed case of unknown origin in the United States, the site published articles on the coronavirus’s ability to be spread by asymptomatic carriers; how it could test President Trump’s penchant for undermining established science; and the determination by experts that containing it “may not be feasible.”

“We have realized this was big and have thrown a lot of resources at it, in Stat terms,” Ms. Branswell said.

The site has attracted nearly 30 million unique visitors this year, which is four to five times its usual traffic, said Rick Berke, the executive editor, who oversees the editorial and business departments.

Part of the reason for the surge is that, like many other publications, Stat has placed its pandemic coverage outside its paywall. But with a staff of roughly 30 reporters and editors well versed in health and science, the site was well positioned to cover an epoch-defining story.

“We’re not seeing stories first because we’re smarter, faster or more savvy,” said Jason Ukman, a managing editor. “It’s just because this is the world we’ve been plugged into the whole time. We were built for this.”

Stat was started by the financier John W. Henry, the principal owner of the Boston Red Sox and the Liverpool Football Club. Before determining that Boston should have a site to cover the industries of its many hospitals, research labs and biotech start-ups, Mr. Henry bought The Boston Globe from The New York Times Company for $70 million in 2013.

Mr. Berke, formerly a reporter and an editor at The Times, came aboard as a co-founder. Another key member of the leadership team is Linda Henry, Mr. Henry’s wife, the managing director.

“This realization John had was that we need to tell the story of what’s happening in life sciences, and that story needs to come from Boston,” Ms. Henry said.

Mr. Berke hired a staff that included veterans of the beat — like Sharon Begley, once a science columnist and an editor for Newsweek, and Ed Silverman, who had reported on the pharmaceutical industry for The Wall Street Journal — in the belief that there was a demand for a news outlet dedicated to health and medicine.

“There wasn’t a site that aggressively, in a very ambitious way, covered these stories every day as their main focus,” Mr. Berke said.

Stat is operated separately from The Globe, but the two split some back-office functions, occasionally run each other’s articles and share a headquarters on Exchange Place. The site’s main source of revenue is subscriptions, starting at $35 a month with discounts available. Stat also publishes sponsored content in its newsletters and has started soliciting donations.

Before it attracted a wider readership through its pandemic coverage, Stat drew praise for its investigations of the marketing and prescribing of OxyContin; IBM’s efforts to harness artificial intelligence to cure cancer, which, Stat found, fell short of the hype; and how groupthink may have stymied an Alzheimer’s cure.

With articles written in a straightforward style, Stat is meant for a general audience. But it wants to win over specialists, too — readers like William Hanage, a professor of epidemiology at the Harvard School of Public Health, who praised the site’s coverage as “accessible” yet “still rigorous.”

“There is no single place on the internet that I would go to better update myself on the diversity of views that are out and circulating,” he said.

Dr. Hanage added that Ms. Branswell’s reporting on the coronavirus had made her “a godlike figure to people who are infectious-disease epidemiologists.”

Ms. Branswell, who has published about 50 articles on the pandemic, was a health reporter at The Canadian Press before taking on the infectious-disease beat at Stat in 2015. In October, she profiled the World Health Organization’s head of health emergencies, Mike Ryan.

These days, in her time away from work, Ms. Branswell reads mysteries and checks in on friends and family (remotely, of course). She also spends time on Twitter, where she serves up reliable information from experts in the field.

Ms. Branswell said the next frontier of testing would be serological — to test not if subjects are carrying the virus but if they have already had it.

A nervous reporter asked: Are we going to get through this?

“It’s not going to be over soon,” she said. “And it’s going to be very painful. But yes. We’ll get through this.”