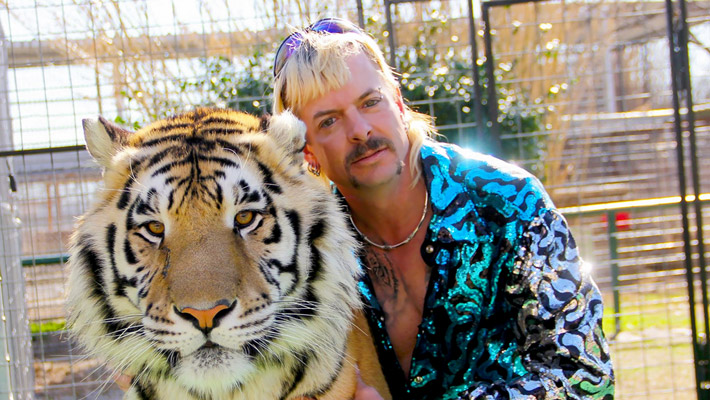 The Netflix docuseries Tiger King has proven to be excellent counter-programming to, well, you know, what’s going on in the real world. Turns out obsessing over zoo owner-turned-convict Joe Exotic is a stellar way to distract one’s self from the ever-increasing tragedy that is the COVID-19 outbreak, with artists already covering Joe’s bizarre songs, which it turns out he didn’t write or record himself. Everyone’s so Tiger King crazy that there’s already talk of a limited series adaptation for NBCUniversal’s UCP.

As per Page Six, Robert Moor — host of the podcast version of this tale, which aired on the second season of his Over My Dead Body, entitled “Joe Exotic: Tiger King” — went on Andy Cohen Live to talk about the show, which is being developed by Kate McKinnon. The SNL star was an early Joe Exotic adopter, having pursued the project before the Netflix doc-series after listening to Moor’s podcast, and Moor dished on what would be his dream cast (which, just to stress this, doesn’t actually mean that’s the cast we’ll get).

“Sam Rockwell was one of the names that came up a lot to play Joe Exotic,” Moor told Cohen, although his own pick for Joe was much more outside the box. “My preferred casting — and this is off the wall — would be Margot Robbie. I think Margot Robbie should play Joe in a like a gender switch [thing] …” Why Robbie? “Just look at her eyes, that’s the thing, if you look at her eyes, she has these eyes that are just like Joe’s … I think she would do a great job with it.”

Moor also name-checked John C. Reilly for Doc Antle. Of course, how even these three greats could live up to the originals is a question worth asking. After all, truth is stranger than fiction.

You can listen to Moor and Cohen discuss the optioned “Joe Exotic” show in the video above.