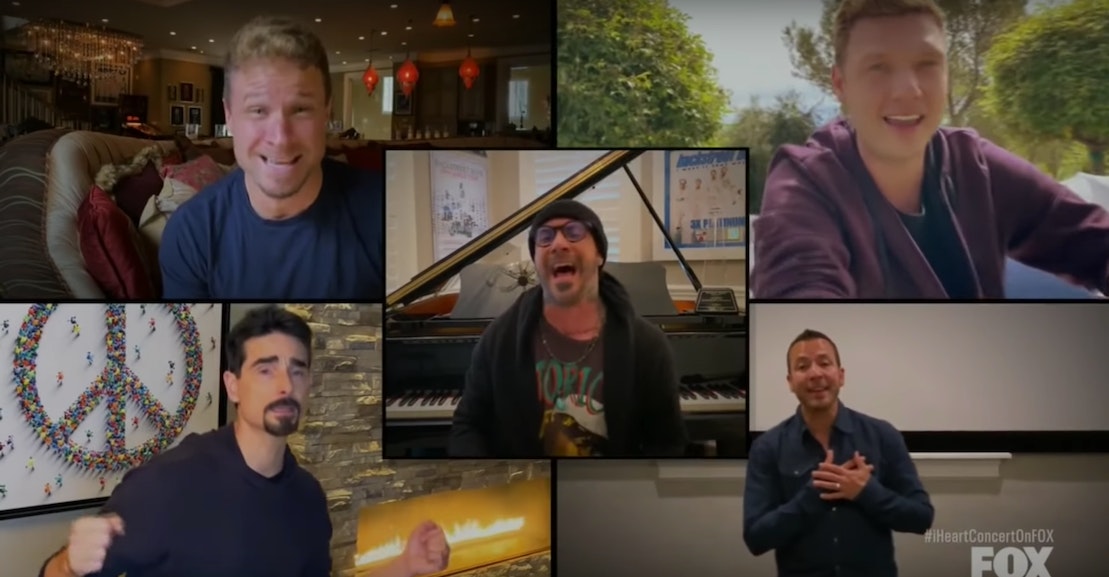 In the United Kingdom, the government has pledged to cover 80 percent of the wages of workers left unemployed as the result of the coronavirus. Ireland has enacted an emergency nationalization of its hospitals to meet public demand during the crisis. On Sunday night in the United States, in the absence of a functioning social safety net or guaranteed health care, people got the “Living Room Concert for America,” hosted by Elton John and broadcast by iHeart Radio and Fox. The event, meant to take the place of an iHeart Radio awards ceremony postponed due to coronavirus and serve as a form of counterprogramming to a rising death toll, offered glimpses into celebrities’ homes, effusive praise for first responders, and a parade of mansion-dwellers soliciting donations to the charities Feeding America and the First Responders Children’s Foundation. A little patriotic pomp in the face of an existential crisis and a quintessentially American spectacle.

The hour-long program—which included at-home performances by Mariah Carey, Billie Eilish, Green Day’s Billie Joe Armstrong, and Camila Cabello, among others—tried to modulate between solemnly addressing the public health disaster at hand and serving as an hour of escapism for the homebound, socially-distanced American populace, and subsequently achieved neither. Brief phone-camera dispatches from health care workers, police officers, and other front-line personnel were shuffled between musicians’ couchside renditions of Top 40 hits and celebrity speeches on compassion and resilience, making the whole affair yet another inadvertent display of the ludicrous distance between the part of society that will face physical and financial disaster from the pandemic and the part that will probably be fine.

The e-concert opened with all five Backstreet Boys performing their 20-year-old hit “I Want It That Way” in simultaneous isolation from their respective homes. One (Brian) played air guitar in Louis Vuitton pajama bottoms next to a pinball machine; another (AJ) moved from singing in front of a vast sneaker collection to posing before a grand piano under a framed plaque commemorating the group’s 3x platinum record sales. Nick Carter lounged outdoors by his pool. Shortly after that, Russell Wilson and Ciara appeared onscreen to issue a motivational communique as their small sons tossed a football about. “We’re here making the best times that we can in this tough time that we’re all going through,” Ciara stressed. Elton John, who MC’d the whole procession from a perch in front of an ornate glass chandelier, said at one point, “I have to be quarantined in the only house I have ever been in without a piano,” a slightly inopportune reminder that he owns multiple homes. (He also eventually did produce a small keyboard, and performed “Don’t Let the Sun Go Down on Me” to close out the night.)

Other celebrities managed to dial in from more modest settings and issued praise and encouragement for the nation’s first responders, but even these seemed a little light in the face of unprecedented disaster. “I’d like to dedicate this song to all the people out there who are on the front lines,” said Dave Grohl before launching into an unplugged “My Hero.” Actor Ken Jeong appeared briefly in the lineup to announce that Procter and Gamble was donating $500,000 to the two charities of the evening, an amount that Fox then pledged to match. For a company whose revenue exceeded $2.7 billion in the third quarter of 2019, half a million seemed a somewhat small contribution, particularly after weeks of dismissing the entire pandemic as an anti-Trump hoax.

And of course, viewers at home were encouraged throughout the duration of the event to pony up, too, despite the record-breaking unemployment numbers and the near certainty of more layoffs in the future. That request echoed a plea from multimillionaire singer Pharrell last week that read, “Hospitals are running low on masks, gowns, and other critical items. We need to replenish their supplies. Take action, make a donation, and ask others to join the fight. We’re in this together. Let’s protect the responders on the frontlines.”

In this crisis, which has been defined by extreme uncertainty and a lack of a cohesive national plan, the celebrity response has mostly been a protracted fumble. At best, creative works in a time of hardship provide some comfort or hope—or even just a welcome distraction—but at their most shallow, they imagine, as critic Daniel D’Addario wrote, “that merely existing as a celebrity should provide enough inspiration to the masses to offset the world’s ills.” In the case of the Living Room Concert for America, what was on display was less art in a crisis than it was a pageant of the very inequality that continues to shape the coronavirus fallout.