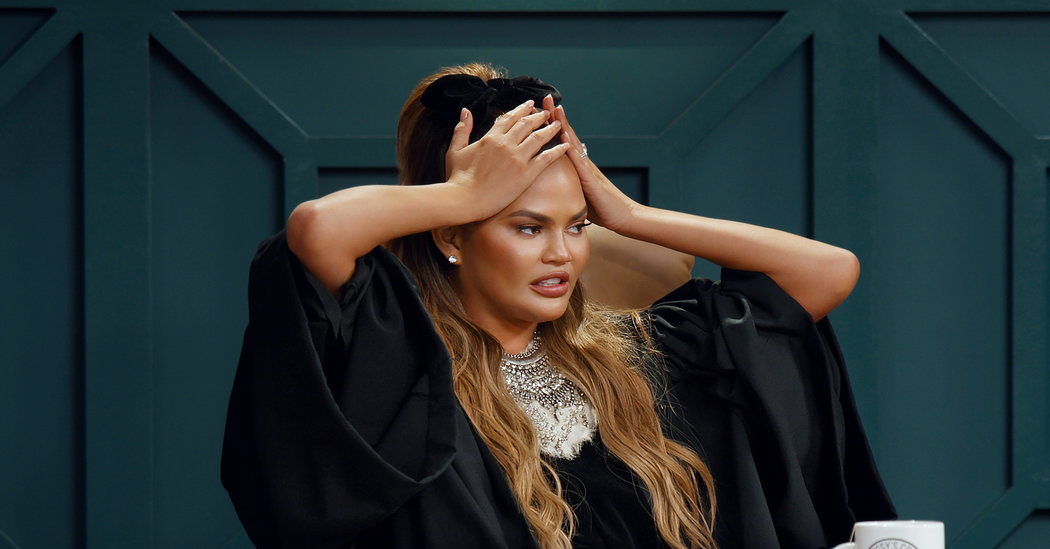 Quibi, set to launch on April 6, stands for “quick bites,” which refers to the service’s plan to offer short segments (10 minutes or less) designed for small screens (your phone).

But little else about this short-form venture is bite-size. In its first year, the company’s partners (the chairman Jeffrey Katzenberg and the C.E.O. Meg Whitman) are spending more than a billion dollars on content acquisition alone. That’s partly because everyone in Hollywood seems to be doing a Quibi show, including heavy-hitters like Steven Spielberg, Guillermo del Toro, Kevin Hart and Jennifer Lopez.

In early March, Quibi released an early look at its debut lineup, a total of 50 shows including Liam Hemsworth’s “Most Dangerous Game,” Queen Latifah’s “When the Streetlights Go On” and Chrissy Teigen’s “Chrissy’s Court.”

But this is just a fraction of what Quibi says it will release in its first year: about 8,500 “quick bites of content” and around 175 new shows. Thirty-five of these shows are “movies in chapters”; 120 are unscripted reality shows or documentaries; and the rest are news and lifestyle pieces, or what they call “daily essentials.”

Of course, times were different in early March. Given all the halted productions and frozen budgets, how many of these shows will happen? Will any of them be good? And will anyone pony up $4.99 a month (or $7.99 without ads) to watch Quibi? That’s hard to predict in this time of economic uncertainty and social distancing, in which fewer people are commuting and more are working from home. That’s a lot less phone time between train stations and a lot more home time for binge-able series like “Tiger King.”

For now, Quibi’s roster of boldface names is impressive. Here’s who we knew about in time for publication, listed in alphabetical order. (Others involved in Quibi shows are denoted in bold.)

Alexandre Aja: The director is developing a live-action adaptation of the horror manga “Tomie.”

Stephen and Robbie Amell: The two actors (and cousins) are doing a spinoff of “Code 8,” their crowdsourced sci-fi thriller about oppressed super-people. The original film’s director, Jeff Chan, will be the showrunner.

Will Arnett: He’s hosting a show called “Memory Hole,” which examines so-called under-discussed subjects (the focus of the first season is Canada), with guests such as Jason Bateman and Patton Oswalt. It debuts April 6. Arnett is also producing the animated series “Your Daily Horoscope.”

Ayo & Teo: The duo behind the viral dance challenge “Rolex” will be hosting “The Sauce,” a cross-country dance-competition series. (Usher is judging and executive producing.)

Tyra Banks: She’s starring in and executive producing a docu-series called “Beauty,” which examines standards of beauty around the world and the ways in which they’ve developed.

Chancelor “Chance the Rapper” Bennett: He’s taking over Ashton Kutcher’s role in yet another “Punk’d” revival, which will continue to be devoted to pranking unsuspecting celebs. High jinks begin on April 6.

Joel Kim Booster: He’s co-hosting (with Keke Palmer) the rebooted “Singled Out,” which has been redesigned for all genders and sexual orientations across 20 episodes and debuts April 6. He’s also writing and co-producing the Fire Island rom-com “Trip.”

Guy Branum: The comedian is resurrecting the 2003 rom-com “How to Lose a Guy in 10 Days.” (He’s presumably not the guy they’ll be losing.)

Titus Burgess: The actor and singer is hosting a deconstructed cooking competition called “Dishmantled,” in which a mystery dish is cannon-blasted into the faces of chefs who must identify and recreate it. (Seriously.) Michael Che, Rachel Dratch, Jane Krakowski and Rachel Dratch are among the judges for this strange ritual.

Bill Burr: The comedian is writing, directing, producing and starring in “Immoral Compass,” a show based on Tyler Falbo’s digital shorts about moral dilemmas.

Kay Cannon: The “Pitch Perfect” screenwriter is producing an adaptation of the book “Dead Spots,” which is about a supernatural crime-scene cleaner.

Kiari “Offset” Cephus: The Migos member is taking celebrities for a ride with “Skrrt with Offset,” debuting April 6. Guests include Cardi B, Dapper Dan, Jay Leno, T-Pain and more.

Darren Criss: He’s the co-creator, songwriter and star of the 10-episode musical comedy “Royalties.” Amy Heckerling is directing all 10 episodes.

Tom Cruise: Quibi is developing a series called “Les Grossman,” about Cruise’s immortal “Tropic Thunder” character. While the service hasn’t confirmed Cruise’s involvement yet, do you think they could do it without him, playaaa? “Thunder” vets Ben Stiller and Justin Theroux were announced to be taking part at CES.

Cara Delevingne: The model and actress is hosting and executive producing a practical joke series — working title “Pranks” — in which she’s assisted by a squad of female accomplices.

Guillermo del Toro: First Quibi announced that the Oscar-winning director was creating a modern vampire film — working title “Aftermath.” Then Quibi said that it was about zombies. Either way, it’s about the undead, del Toro’s specialty.

Adam Devine: This comedian is angling for a Darwin Award with “Bad Ideas with Adam Devine,” an adventure/travel show in which he puts himself and some famous companions in precarious positions (like wearing yummy chum in piranha-infested waters).

Zac Efron: He reportedly nearly killed himself making “Killing Zac Efron” — requiring a medevac to a hospital in Australia after living off the grid in Papua New Guinea for this adventure/survival series.

Idris Elba: He’s facing off against the rally car driver Ken Block in “Elba vs. Block,” an eight-episode series featuring stunt challenges like the Flaming Obstacle Course and the Wall of Death. The stunts begin April 13.

Dexter Fletcher: The “Rocketman” director’s involvement with an unspecified film was announced at CES.

Will Forte: He’s co-starring with Kaitlin Olson as home renovators who luck into a cartel stash house in “Flipped,” one of the first shows available on launch. The comedy, which co-stars Andy Garcia and Eva Longoria, debuts April 6.

Ron Funches: The comedian is hosting a game show called “Nice One!,” in which comedians like Chris Hardwick try to toast, not roast, each other.

Evan Funke: The celebrity chef is pursuing his obsession in “Shape of Pasta,” sharing his delights starting April 6.

Seth Grahame-Smith: The author of “Abraham Lincoln: Vampire Hunter” is executive-producing “The Last American Vampire,” focusing on a vampire-F.B.I. team-up.

Mary Harron: The “American Psycho” director is helming “The Expecting,” a horror film about a disturbing pregnancy starring AnnaSophia Robb.

Kevin Hart: He’s producing, writing and starring in “Die Hart,” playing a would-be action hero version of himself who takes classes from John Travolta’s action-school coach. (It’s an expansion of the opening scene of his film “Kevin Hart: What Now?”)

Liam Hemsworth: The “Hunger Games” star is the hunted prey “Most Dangerous Game,” a retelling of a classic short story with Christoph Waltz playing the mastermind in one of Quibi’s first shows to launch. May the odds be ever in his favor.

Boyd Holbrook: He’s playing a man wrongfully accused of terrorism (and pursued by a detective, Kiefer Sutherland) in a reboot of “The Fugitive.”

Rosie Huntington-Whiteley: The model and actress is hosting and executive producing a show about beauty icons with the working title “The Go See.”

O’Shea “Ice Cube” Jackson: His involvement with an untitled heist series was announced at CES.

Kendall and Kris Jenner: The model and her mother, Kris, are executive producing a parody series about the impersonator “Kirby Jenner,” who pretends to be Kendall’s fraternal twin on Instagram. (A Twinstagrammer?) Ryan Seacrest is also executive producing.

Joe Jonas: He’s expanding his Instagram travelogue of the cities explored on tour with “Cup of Joe,” along with guests like Jack Black, Tina Fey, David Hasselhoff (in — where else? — Germany) and Matthew McConaughey. It debuts April 27.

Rashida Jones: The writer-actress and her writing partner Will McCormack are executive producing a flower design series called “Centerpiece,” in which such guests as Ava DuVernay and Maya Rudolph create floral centerpieces with host Maurice Harris of Bloom & Plume.

Anna Kendrick: She’s executive producing and starring in the comedy “Dummy,” playing a woman who becomes buddies with her boyfriend’s sex doll. (Get a glimpse of it here.)

Queen Latifah: She’s starring as a police detective investigating a double murder in “When the Streetlights Go On,” one of the first shows available at launch. Mark Duplass, Tony Hale and Chosen Jacobs co-star, debuting April 6.

Thomas Lennon: Another Quibi M.V.P., he’s starring in and writing both the “Reno 911!” revival and the Napa Valley comedy “Winos.” Wendi McLendon-Covey is also producing and co-starring in “Reno 911!”

Jennifer Lopez: She’s executive producing and participating in “Thanks a Million,” a pay-it-forward-style show starting April 6 that will feature guests such as Nick Jonas, Yara Shahidi, Gabriel Iglesias, Kristen Bell, Tracy Morgan, Karlie Kloss and Aaron Rodgers, who pay back people who’ve helped them out along the way.

Miles “Lil Yachty” McCollum: The rapper is starring in “Public Figures,” a comedy inspired by events of his youth.

Jed Mercurio: The “Bodyguard” creator is developing a sci-fi thriller, “Transmissions,” about a scientist who’s receiving signals from deep space.

Trevor Noah: The “Daily Show” host is executive producing and starring in a comedic travelogue about his interactions on tour — the working title is “Canceled.”

Jim Parsons: He’s executive producing the comedy “The Monarchy Is Going To S***.”

James Patterson: The author is an executive producer on the adaptation of his book “Toys.”

Paula Pell: She’s the co-creator and star of the comedy “Mapleworth Murders,” about a mystery writer who just so happens to have homicides committed in her vicinity on a disturbingly regular basis. Her “Saturday Night Live” colleagues (such as Fred Armisen, Maya Rudolph, Tim Meadows and Tina Fey) pop by as characters to be accused — or killed. Lorne Michaels and Seth Meyers are executive producing.

Ryan Reynolds: His involvement with an unspecified animation project was announced at CES.

Kathleen Robertson: The actress is writing and executive producing the remake of 1995’s “Swimming with Sharks” starring Kiernan Shipka and Diane Kruger.

Michelle Rodriguez: Her involvement with a show called “Ten Ton Chum” was announced at CES.

Anthony and Joe Russo: Inspired by the Reed Tucker’s book “Slugfest: Inside the Epic, 50-Year Battle Between Marvel and DC,” the “Avengers” directors and brothers are exploring comic book rivalries on “Slugfest.” Pow!

Ridley Scott: He’s executive producing the gaming thriller/horror “CURS_R,” about a computer survival game that tricks players into playing for their lives.

Steven Soderbergh: He’s executive producing the thriller “Wireless,” about a crash survivor (played by Tye Sheridan) trying to communicate on his smartphone. (Get a glimpse at about 27 minutes into this.)

Steven Spielberg: He’s creating a horror series — working title “After Dark” — that will unlock on phones only after the sun has set in the viewer’s location.

Veena Sud: The showrunner for “The Killing” is the creator, writer and director of the ride-share thriller “The Stranger,” starring Dane DeHaan as a sociopath terrorizing his driver Maika Monroe. It debuts April 13.

Jimmy Tatro: He’s the co-creator and star of “Junior High,” an expansion of his YouTube series, and a co-star on “The Now.”

Chrissy Teigen: She’s the judge presiding over small claims cases in “Chrissy’s Court,” where she rules on real-life cases. Teigen’s mother Vilailuck acts as bailiff in the 10-episode series. Court is in session starting April 6.

Sophie Turner: She’s starring as a suicidal plane crash survivor who has to find a will to live in an adaptation of Alex Morel’s “Survive,” debuting April 6. Corey Hawkins co-stars.

Gabrielle Union: She’s executive producing “Black Coffee,” a comedy about a former basketball star who opens up a coffee shop.

Mark Wahlberg: He’s executive producing “Run This City,” a docu-series debuting April 6 about Jasiel Correia II, the former mayor of Fall River, Mass., who during his term was charged with fraud, bribery and extortion.

Allen Strickland Williams: He’s the creator of the comedy “Unmatched,” about people who refuse to settle down.

Reese Witherspoon: The actress-producer — who is married to Quibi’s head of content acquisition and talent, Jim Toth — is hosting “Fierce Queens,” a docu-series debuting April 6 about female animals who lead their packs or pods (hyenas, humpback whales) as well as the femme fatales who dine on their mates (fireflies). Toth, beware!