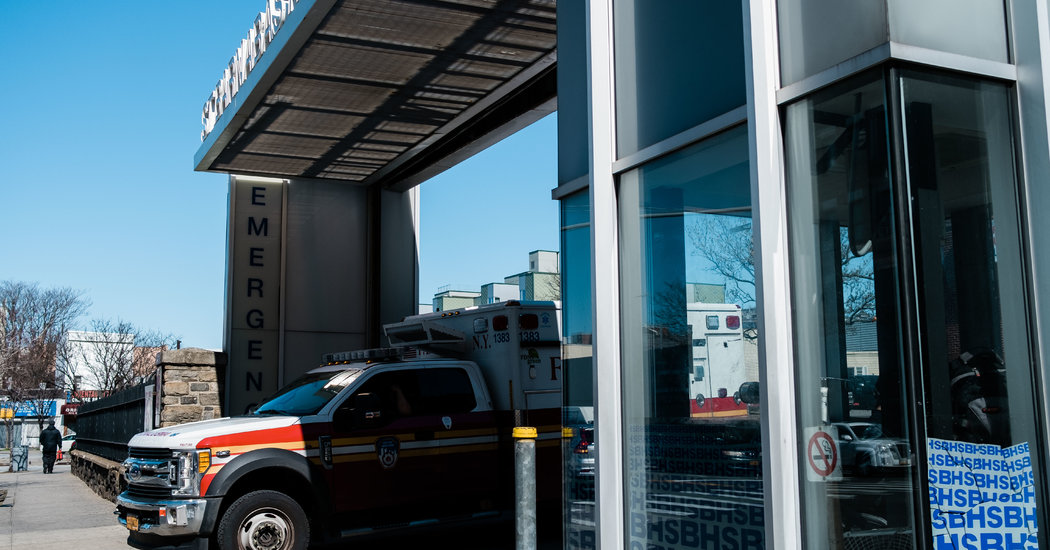 For the last few weeks, Dr. David Perlstein has been scrambling to find more beds and ventilators, knowing that the coronavirus outbreak, which has filled his Bronx hospital with more than 100 patients, will undoubtedly get much worse.

Then a week ago, Dr. Perlstein, the chief executive officer of St. Barnabas Hospital, was given some disturbing news by a state senator: His hospital could soon lose millions of dollars in government funding.

The funding cut was proposed by a panel that Gov. Andrew M. Cuomo convened earlier this year, before the virus had reached the United States, to rein in the state’s growing Medicaid program by identifying $2.5 billion in savings.

But the timing of the proposals, which were released in mid-March and include about $400 million in cuts to hospitals, was a blow to the morale of many hospitals and medical workers on the front lines of the fight against a ruthless virus that has infected tens of thousands in New York.

“It’s a shot in the gut,” Dr. Perlstein said. “During a time I need to commit all the energy I have to really save lives and expand access and not skimp on resources, now I have to worry about how we’re going to continue to pay our bills.”

Asked about the proposed cuts, the governor said on Saturday that hospitals would receive a windfall from the $2 trillion federal stimulus package, which provides over $150 billion in grants to hospitals fighting the virus across the country.

“The places that are getting the most funding now because of what the federal government did are the hospitals,” Mr. Cuomo, a third-term Democrat, said. “They are doing better than anyone else.”

He then said, as he has before, “The state has no money.”

Government spending cuts are inherently contentious, but the optics of reducing money to hospitals at the epicenter of the nation’s pandemic quickly sparked a backlash from elected officials across New York City.

Six lawmakers from Brooklyn wrote a letter to Mr. Cuomo calling the millions of dollars in cuts to four hospitals in their districts “cruel, inhumane and unacceptable” and “catastrophic during a pandemic.”

Brad Hoylman, a state senator from Lower Manhattan, said the proposals seemed wildly out of step with the current images of doctors, nurses and others fighting the disease in hospitals across the city.

“It seems tethered to a different time and place,” Mr. Hoylman said, of the proposal, noting that the formation of the panel, the Medicaid Redesign Team, was announced the same day — Jan. 21 — as the nation’s first confirmed case. “Now New York is the epicenter of the pandemic. And the members of the M.R.T. frankly didn’t have that information.”

The Democratic-controlled Legislature will be asked to approve the proposals this week, as it hustles to pass a state budget by the April 1 deadline, a usually arduous task made all the more difficult by the outbreak: Four members of the State Assembly have been diagnosed with the disease, and neither chamber has convened since mid-March.

Lawmakers are also considering the proposals against a bleak financial backdrop: The state was projected to have a $6 billion budget gap, mostly a result of increased Medicaid spending, but the coronavirus crisis could lead to an additional $10 billion to $15 billion shortfall.

State Senator Gustavo Rivera, the Bronx Democrat who serves as chairman of the Senate Health Committee, said Mr. Cuomo’s plans were a “debacle,” and particularly jarring considering the governor’s much-applauded handling of the coronavirus crisis.

“It still boggles my mind that this is the same guy who goes, and sits down in front of that TV, and in front of you all in Albany, lays it all out, smartly and ably,” Mr. Rivera said, praising the governor’s coronavirus performance. “And then he breathes in, and the next thing that comes out of his mouth, ‘And you got to let me cut the Medicaid system.’”

As part of the budget negotiations, the executive branch provided the State Senate with data showing how hospitals could be affected by the proposed cuts; each senator then received an email detailing the impact on hospitals in their districts, Mr. Rivera said.

Many of the hospitals that would be hurt by the cuts are so-called safety-net hospitals, which largely serve uninsured or undocumented residents, some of whom are considered susceptible to infection because of cramped living or work conditions.

Indeed, the brunt of the proposed cuts at St. Barnabas, where almost 90 percent of patients are partly covered by Medicaid, could come from reducing $7.7 million in Indigent Care Pool funds, grant money meant to reimburse hospitals for treating poor and uninsured patients for free.

Dr. Perlstein, who complimented Mr. Cuomo’s response to the coronavirus, said it was unconscionable to grapple with the prospect of a funding cut “when we’re 14 days from Armageddon.”

“Especially at a time I’m asking my staff to give it all,” said Dr. Perlstein, who has worked at the hospital for over 20 years. “If these cuts remain, I have no way to survive as a hospital. I’m already walking a very fine line when it comes to revenue.”

Robert Mujica, the state budget director, said that it was “disingenuous” to scrutinize any individual hospital cuts without taking into account “the full picture” of other savings and efficiencies from the proposals, which he stressed are still being negotiated with the Legislature.

Asked about the proposals last week, Andrea Stewart-Cousins, the Senate majority leader, said the state should be looking for ways to “strengthen our system and not in any ways of undercutting it.”

Mr. Hoylman said he was hoping that the Medical Redesign Team might reconsider its recommendations, or at least delay their implementation, saying he was concerned about the “public messaging” of Albany looking to save money in the middle of crisis.

Officials from New York City’s Health and Hospitals Corporation said that it was too early to judge the effect of the proposals on its 11 public hospitals, but that any consideration of cuts should be delayed until after the coronavirus crisis has subsided.

New York funds more than $1 billion a year in hospital charity care, designated for uninsured or underinsured patients. But the complicated formula used to distribute that aid to hospitals has come under fire because it often gives hospitals more money than they actually spend in charity care, while undercompensating others.

The changes proposed by the Medical Redesign Team are meant to more fairly allocate those grants.

The proposals would effectively result in lower charity care grants for about 60 percent of all New York hospitals, but they would increase grants for 20 percent of hospitals, according to Bill Hammond, the director of health policy at the Empire Center, a conservative think tank.

“This is classic health care financing,” Mr. Hammond said. “No matter what you do, you create winners and losers. In this case, there are more losers. People who were expecting more money, they’re not going to get it.”