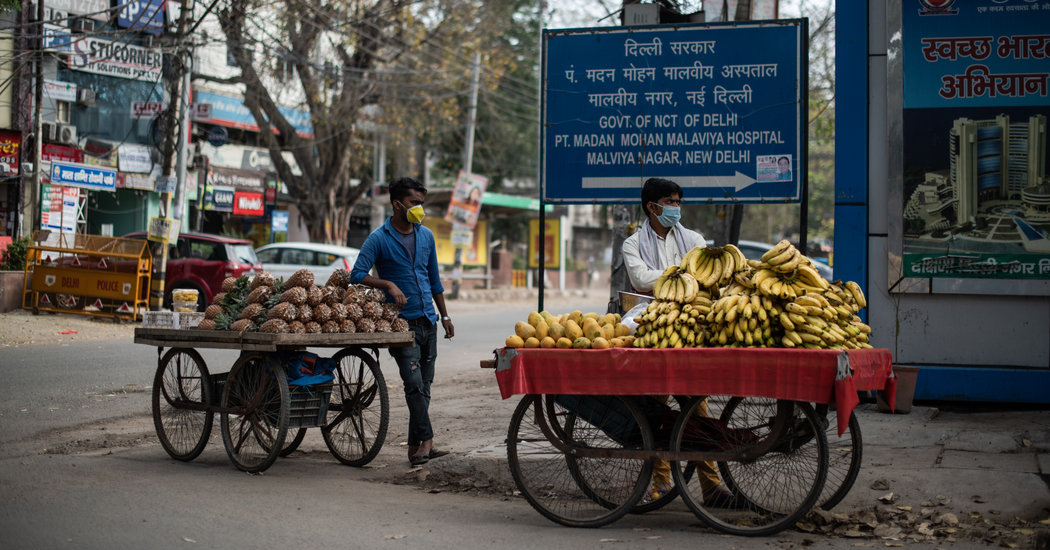 Prime Minister Narendra Modi has ordered a lockdown of India’s 1.3 billion citizens to fight the spread of coronavirus, urging people to distance themselves socially and work from home.

But social distancing means hunger for many in India, with a work force heavily dependent on manual labor. It would be an unheard-of luxury for the ragpicker or street vendor who lives day to day.

About 80 percent of India’s 470 million workers are in the informal sector, lacking contracts and unprotected by labor laws. Many are manual laborers in the fields, factories and streets of India.

We asked people how they were making ends meet as the economy grinds to a halt with the coronavirus pandemic. India reported 1,024 cases and 27 dead as of Sunday. Here are some of their stories:

What’s he afraid of? ‘The police and not being able to eat’

Ashu and his two brothers spend their days at one of Delhi’s biggest dumps. They are ragpickers — scavengers who hunt for scrap metal using a giant, rusted sieve to help them sort through the stinking refuse.

If Ashu works really hard, he can earn 53 cents a day. He and his brothers have been unable to go to the dump regularly since the lockdown was announced because if they are caught by the police, they will be beaten.

“I miss my friends,” he said, adding that he and four buddies would meet at the dumpsite every morning, work for a few hours and then play with whatever treasures they found — broken toy cars, tattered dolls and ripped clothing.

“I hear there is a virus from China going around,” Ashu said. “But I’m more afraid of the police and not being able to eat.”

“When the money dries up, we will have to find a way to come back here again,” he said.

‘At least this life of misery will be over’

On a Wednesday afternoon, normally peak rush hour in Delhi, Ramchandran Ravidas was bicycling around in big, lazy circles in the middle of a main thoroughfare, boredom, hunger and his empty pockets on his mind.

On a good day, if he has “a lot of energy” he can make up to 450 rupees, or $6, he said. He lives out of the garage he rents his bicycle rickshaw from and worries that he will be evicted soon; he has had no customers since the lockdown.

“If you don’t even have a house, how can you work from home?” Mr. Ravidas said, worry lines furrowing his face. “My home is my work. Today was the first time in my life I had to accept food from a charity.”

He said, for him, it was a race between whether the virus or hunger got to him first.

“I’m not worried about corona; if corona comes to get me, at least this life of misery will be over,” Mr. Ravidas said, breaking into a grin as he roared with laughter.

‘I’ve never seen this panic in my entire life’

Walking barefoot along Delhi’s deserted streets, his saffron-colored clothing stained and tattered, Baudghiri said he had not eaten in two days. A sadhu, or religious ascetic, he makes about $1.50 every day by offering prayers to people on the street.

Mr. Baudghiri, who goes by just one name, had never gone hungry a day in his life, he said, and had always found a meal in Hindu temples or gurdwaras, Sikh places of worship. But they have closed since the lockdown started last week.

While he agreed with the prime minister’s decision to try to prevent the virus’s spread by limiting people’s movement, he was frustrated with the government’s lack of planning for the destitute like him.

“I do not have a house to practice social distancing in,” he said. “I go from place to place, temple to temple, to eat. But the entire city is closed.”

In all his decades of walking across India, Mr. Baudghiri said he had never seen India so paralyzed.

“In every crisis, the gurdwaras, the temples were all open,” he said. “We were still able to feed ourselves and find shelter. I’ve never seen this panic in my entire life.”

‘I don’t have the pleasure of staying at home’

Sweeping leaves and trash off a deserted street and dumping them into her rusted wheelbarrow, Raj Kumari said the silence of the normal cacophony of Delhi was glorious, but eerie.

She used to sweep Delhi’s streets with her husband, but he died eight years ago. She is now the sole breadwinner for her six children, after her eldest son was laid off from his tech job this past week because of the lockdown.

“It’s just me and the sewer cleaners out here now,” she said.

The lockdown has affected public transportation, and she now walks two hours just to get to work.

“This is what I have to do for money, for life,” she said. “Even if the streets are empty, I have to come out. I don’t have the pleasure of staying at home, this is my duty.”

The government has never provided Ms. Kumari, who does not know her exact age, with gloves or masks for her job. But one of her daughters forbade her from working without protective gear during the pandemic and gave her a mask that her school had donated to students to protect against Delhi’s infamous pollution.

“I’m not afraid of corona,” Ms. Kumari said. “Why would anyone fear death when it is time for God to take you?”

Every morning, Mohan Singh and his father pile their carts with fruit and wheel their loads to work, on a busy neighborhood street corner. Although their jobs are deemed necessary and permissible during the lockdown, they say customers are too afraid to come to their carts. By midmorning, they had served one customer between them.

“If we are afraid of this disease, we will die in our homes,” Mr. Singh said, adding that he and his father provide for their entire family of six.

Mr. Singh said he was worried that the government was going to help big businesses and that small businesses like his would be overlooked. Although the government announced a $22 billion relief package to support the millions left unemployed because of the crisis, some say people in the informal work force, like Mr. Singh, will have trouble getting help.

“They need to help people like us,” he said. “There are more people working on the streets than India’s biggest companies. If we close, no one can eat.”

‘If we stay at home, my family goes hungry and India goes thirsty’

Many Indian homes lack running water or water safe enough to drink, making Arjun Chauhan’s job a necessity during the lockdown. He zipped across Delhi’s streets on his moped bike, stacked high with leaking water bottles.

“If we stay at home, my family goes hungry and India goes thirsty,” Mr. Chauhan said, adding that his parents and five siblings rely on his wages.

Since the lockdown, Mr. Chauhan has seen his daily earnings of about $8 cut in half. He said he had been unable to reach all his customers because the police had prevented him from deliveries and even beat him for being on the streets although under the lockdown rules, deliveries of necessary items like medicine and water are supposed to be allowed.