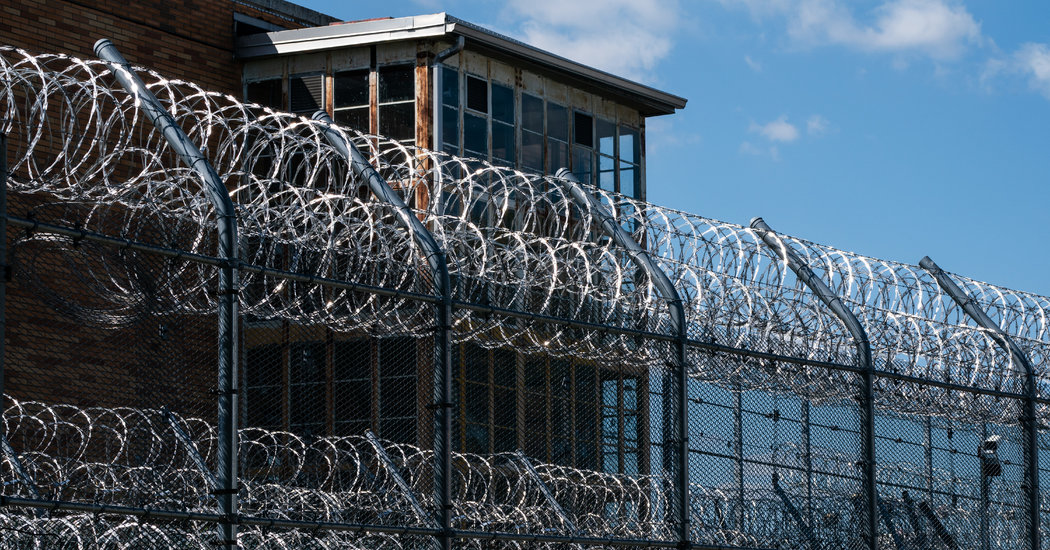 One inmate used an alcohol pad that a barber had given him after a haircut to sanitize a frequently used Rikers Island jailhouse phone. Another used a sock to hold a phone during a 15-minute call. A third said he and others have used diluted shampoo to disinfect cell bars and table tops.

In the nearly two weeks since the coronavirus seeped into New York City’s jail system, fears have grown of the potential of a public health catastrophe in the cellblocks where thousands are being held in close quarters.

Public officials have been working to release hundreds of people in jail, but while that effort is moving forward, law enforcement officials concerned about public safety have urged caution. Inside the jails, meanwhile, inmates — including some of those waiting to be released — have been struggling to protect themselves from the virus.

“You’re on top of one another no matter what you do,” said one man who was released from Rikers Island recently, who asked to be identified by his first name, Jimmy, because he feared retribution from law enforcement officials. “There’s no ventilation. If anything is floating, everybody gets it.”

As public officials across the country scramble to release their own vulnerable populations in jails and prisons as a result of the coronavirus, New York’s complex on Rikers Island has provided a case study in the difficulty of balancing public safety and public health concerns.

On Monday, for instance, after weeks of cooperating with city officials, the city’s five district attorneys attacked the “seemingly haphazard process” by which people, including some accused of violent crimes, were being released.

“Even at this difficult time, our society must have the ability to safeguard those who are incarcerated, to avoid violating their rights or endangering the community,” the district attorneys wrote in a scathing letter to Mayor Bill de Blasio, adding that conditions at Rikers had the capacity to meet recommendations by federal health officials.

For the past two weeks, Mr. de Blasio has been pushing prosecutors and judges to release as many inmates as possible, after dire warnings from public defenders and jail health officials about the toll the disease could take inside lockups.

On Sunday, he said about 650 people had been released, bringing the city’s total jail population to under 5,000 for the first time since 1949. On Friday, the mayor had said, “We know we have to do this quickly.”

Still, the rate of infection in the city jails has continued to climb, and by Monday, 167 inmates, 114 correction staff and 23 health workers had tested positive. Two correction staff members have died and a handful of inmates have been hospitalized.

More than 800 inmates are being held in isolation or in quarantined groups because someone in their jailhouse tested positive for the virus, the president of the correction officers union said. A medical building that includes the only contagious disease unit on Rikers Island is now full of sick detainees, officials said. The unit has 88 beds.

Fear of the virus has grown among inmates and correction officers, several said in interviews. Some incarcerated people have refused to do the work assigned to them or have started disturbances, demanding more cleaning supplies and masks. Others said that correction officers who are assigned to taking people to clinics have ignored their requests for medical attention. Some correction officers said they did not have the necessary equipment to protect themselves from the virus, and that they had received little guidance from leadership.

Peter Thorne, a spokesman for the city Department of Correction, said in a statement that the city “is doing everything we can to safely and humanely house people in our custody” during the epidemic. The city correction commissioner, Cynthia Brann, declined to be interviewed.

Two weeks ago, the department put out an “action plan” that included stepping up cleaning of inmate housing areas and staff common areas, having detainees sleep head to toe and asking them to stay three feet away from each other and to wash their hands frequently. Jail officials also said they had given correction staff members masks and other supplies.

Jail officials have reopened a recently closed building to house other inmates, placing detainees who test positive in one part of the facility and those with symptoms — a fever, cough, sore throat — in another, said two people with knowledge of the inner workings of the jail. Both groups were given masks.

Yet in interviews, six jail employees and eight people either recently released or still being held on Rikers Island described a tense, crowded and unsanitary atmosphere inside the 10 jails there. Most spoke on the condition of anonymity to protect their jobs or out of fear of reprisals from law enforcement officials.

Jimmy, who was recently released from Rikers Island, said that he and other detainees had mixed shampoo with water and used the solution to disinfect countertops, doorknobs and other areas in a dorm shared by 50 men. They had not been given cleaning supplies, he said. Feces was on the walls of some holding pens and dorm areas, two detainees said.

Social distancing is impossible, he said. In the Rikers jailhouse where Jimmy was, 40 to 50 inmates use the same toilets and share three phones to call loved ones and lawyers. During meals, the detainees sit at five tables with six stools. “That’s elbow to elbow,” Jimmy said. Some of the tables are caked with food from previous meals, he said.

Department officials said that phones are sanitized every two hours and that inmates have access to soap and cleaning supplies.

Several detainees and recently released people said they learned about the virus from friends and family or from watching television. The only guidance they received from correction staff was a pamphlet instructing them to cough into their arms and to wash their hands often.

Another inmate said during a telephone interview that correction staff met with a group of detainees and encouraged them to eat more fruit, and told them that the coronavirus “was no worse than the common cold.”

The warning to keep their distance from one another was impractical, some detainees said, as beds in jailhouse dorms are 18 to 24 inches apart.

Octavious Williams, 53, an inmate and colon cancer survivor, said, “It’s like I’m doomed. I feel like my life is in danger.”

Another inmate, Michael Herrera, said detainees were still being moved around Rikers Island from one jail to another, despite the risk of spreading the virus.

“What we’re going through is inhumane,” said Mr. Herrera, 40, who is being held at the jail on a technical parole violation. “We’re left for dead. We’re just stuck here.”

Some infirm inmates waiting to be released have been in a “legal limbo,” as one public defender described it.

Take, for instance, a 24-year-old who violated his parole when he was arrested on a drug charge. He tested positive for the coronavirus and was transferred to a special quarantine unit, a room with 10 people, all of whom were also infected.

Prosecutors, health officials in the jail and the parole board had all consented to a plan to release the man, who has diabetes and pulmonary disease, but as of Monday morning, he remained stuck in a thicket of bureaucratic procedures, his lawyer, Lara Belkin, said.

Some jail staff members, speaking on the condition of anonymity to protect their jobs, said they do not have protective gear like masks and gloves.

They have been told to bring their own soap into work and to check their own temperature, they said. Healthcare workers who are exposed to a person who has tested positive are expected to continue working unless they develop symptoms.

“Everyone is wondering how we’re supposed to do the job,” said one Rikers civilian staff member. “It’s really scary how unsanitary it is.”

These correction officers also described sloppy quarantine procedures. In one instance, clothes belonging to a detainee who had tested positive were left in the guard’s work area. In another, an inmate with flu symptoms got a test for the virus but was sent back to his cellblock to await the results.

Elias Husamudeen, president of the Correction Officers’ Benevolent Association, said jail officials had been taking as long as a week to notify officers that they had been in contact with someone who had tested positive. He urged the department to form a task force to better coordinate a response.

“When is the department going to be proactive,” Mr. Husamudeen said. “Are they really ready for what’s coming?”

About half of the 5,200 inmates who were in city jails on March 23 were awaiting trial on violent felony charges. Most of the rest were serving sentences of less than a year or were being held on nonviolent felonies, misdemeanors or parole violations.

On Friday, the State Department of Corrections and Community Supervision said people detained for low-level parole violations would be released, a decision that should affect 400 people in New York City jails.

Mayor de Blasio has the power to release some people serving a year or less in a city jail but he has instead tried to build consensus with the police and prosecutors over who should be let out. The final decision for people awaiting trial must be made by a judge or, in the case of parole violators, by state officials.

So far, law enforcement officials have approved about half of the names on City Hall’s list, according to the district attorney’s offices. One reason is a worry about security. The police commissioner, Dermot F. Shea, for instance, has objected to releasing people charged with domestic violence and sex crimes.

Colby Hamilton, a spokesman with the Mayor’s Office of Criminal Justice, said, “The mayor has consistently said that public safety concerns would mean not everyone would be released.”

Nicole Hong and Ashley Southall contributed to this report.