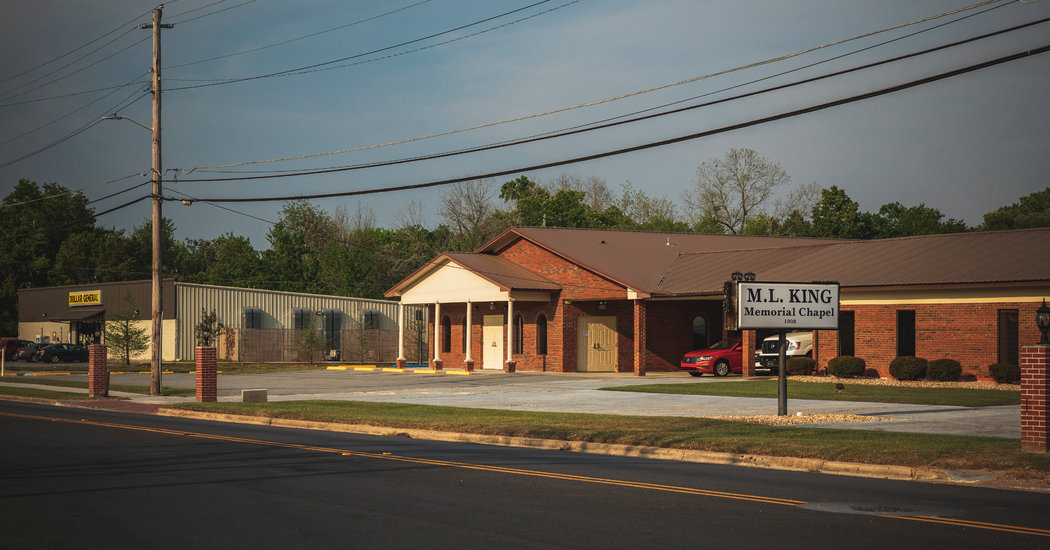 It was an old-fashioned Southern funeral.

There was a repast table crammed with hot dishes, Brunswick stew, fried chicken and key lime cake. Andrew Jerome Mitchell, a retired janitor, was one of 10 siblings. They told stories, debated for the umpteenth time how he got the nickname Doorface.

People wiped tears away, and embraced, and blew their noses, and belted out hymns. They laughed, remembering. It was a big gathering, with upward of 200 mourners overflowing the memorial chapel, so people had to stand outside.

Dorothy Johnson has gone over the scene in her mind over the last month, asking herself who it was who brought the virus to her brother’s funeral.

During the weeks that followed, illnesses linked to the coronavirus have torn through her hometown, Albany, Ga., with about two dozen relatives falling ill, including six of her siblings. Ms. Johnson herself was released from an isolation ward to the news that her daughter, Tonya, was in grave condition, her heart rate dropping.

Like the Biogen conference in Boston and a 40th birthday party in Westport, Conn., the funeral of Andrew Jerome Mitchell on Feb. 29 will be recorded as what epidemiologists call a “super-spreading event,” in which a small number of people propagate a huge number of infections.

This rural county in southwest Georgia, 40 miles from the nearest interstate, now has one of the most intense clusters of the coronavirus in the country.

With a population of only 90,000, Dougherty County has registered 24 deaths, far more than any other county in the state, with six more possible coronavirus deaths under investigation, according to Michael L. Fowler, the local coroner. Ninety percent of the people who died were African-American, he said.

Ms. Johnson said that she assumed one of the guests had brought the virus to her brother’s funeral, where “you hug and you kiss and you embrace.” But she had no more information than that.

“Really, there is no face to what is going on in Albany,” she said.

Whether the initial carrier — the whodunit of infectious disease — matters at all depends on whom you ask. But the timing does matter. For 10 days the virus spread, invisibly, and no one knew it was there. By the time stringent social distancing was introduced, on March 22, it was everywhere.

“We’re not blaming that one visitor, but potentially a community is one person away from something like this exploding,” said Scott Steiner, the chief executive of Phoebe Putney Health System, which has taken the brunt of the surge.

“If you get early delivery of it, it shows you what can happen,” he said. “Had that person come in, had a barbecue, visited family and went home, that would have been a different story.”

Mr. Mitchell died suddenly. Emell Murray, Mr. Mitchell’s companion of 20 years, found him in the living room of their home on the morning of Feb. 24, said her daughter, Alice Bell. There was no autopsy, but it appeared to be natural causes, she said, possibly a heart attack.

“He had been up all night,” said Ms. Johnson, his sister. “When she woke up to get the baby ready for school, she found him face down on the floor.”

The night of the funeral, a 67-year-old man who had come to Albany to attend was admitted to Phoebe Putney Memorial Hospital, complaining of shortness of breath, Mr. Steiner said.

The man had chronic lung disease, and no history of travel that would suggest exposure to the coronavirus, and he was not put in isolation, Mr. Steiner said. Staff members figured that he had just run out of oxygen.

The man spent the next week in the hospital, attended by at least 50 employees, then was transferred on March 7 back to the Atlanta area, where he was tested for the coronavirus. Not until March 10 did the Albany hospital learn he had tested positive, Mr. Steiner said. He died on March 12, the state’s first coronavirus death.

By then, the infection was quietly spreading through town. Mr. Mitchell’s longtime companion, Ms. Murray, 75, found herself racked with chills and fever, Ms. Bell, her daughter, said. She was told she had a urinary tract infection and admitted to an ordinary ward, where she was visited by three of her sisters, Ms. Bell said. All three have since become sick with the coronavirus, she said. One of them has died.

On March 10, word reached Albany that the Phoebe Putney patient had tested positive for the virus. A few days of relative quiet followed, and then, in the words of Mr. Fowler, the coroner, “it hit like a bomb.”

“Some of them might have went to the funeral,” Mr. Fowler said. “Some may have been family members of people at the funeral. Every day after that, someone was dying.”

The six-month stockpile of protective equipment that the hospital had prepared was gone, Mr. Steiner said, in seven days.

At first the doctors and nurses just tried to take in what they were seeing: a series of people — including young people in relatively good health — showing up with a cough and fever.

Then, alarmingly, their need for oxygen would sharply increase, and they would go into full-blown respiratory failure, their lungs filling with fluid, said Dr. Enrique Lopez, 41, a surgical intensivist, who specializes in treating the critically ill.

“All the units were full, all of them, and there would be days when we would be intubating five people in a row, back to back, room after room after room,” he said. “It was one of the times in my career I truly felt overwhelmed.”

The cases arrived in great waves, overwhelming each new effort to add beds.

The 14 medical intensive care unit beds were filled within two days of the first wave of coronavirus patients; they converted 12 cardiac I.C.U. beds, but those, too, were filled two days later; 12 beds in the surgical I.C.U. were filled three days after that, Mr. Steiner said.

For a few days, the hospital was so short of staff members that employees who had tested positive but did not yet have symptoms were asked to work.

“If I had 1,000 nurses sitting at home, and could send the ones testing positive out, I would, but we don’t have that, and nobody has that,” Mr. Steiner said. “You get to the point where you say, ‘If I don’t have the staff, I can’t care for the patients.’”

Dr. Lopez, the surgeon, avoided contact with his family for two weeks, for fear of infecting them.

“I’m sleeping in the garage in one of our closets,” he said. “I park the truck, strip down in the garage, wash myself off, my wife puts out a plate of food for me, I eat the food, and then I go back to the garage.”

The funerals in Albany — of Mr. Mitchell, and then of a man named Johnny Carter, held at the funeral home a week later — quickly emerged as a source of infection.

Of the first 23 patients to test positive at Phoebe Putney, all had attended at least one of the two funerals, Mr. Steiner said. That was easy to figure out.

“This wasn’t like a team of scientists in a bunch of suits,” said Chris J. Cohilas, chairman of the Dougherty County Board of Commissioners. “We’re a big small town where everybody knows everybody. We know who is in our hospital, and we know who went to what funeral.”

Word went out “so quickly and so aggressively” that those who attended either of the funerals should get tested, Mr. Cohilas said. But not quickly enough to prevent an infected person from serving as a juror in a high-profile murder trial that ended on March 12. That set off a new set of infections in the sheriff’s office and the courthouse, he said.

The warnings drove a wedge between people in Albany, said the Rev. Daniel Simmons, the senior pastor of Albany’s Mt. Zion Baptist Church, who, like others interviewed, said he questioned whether the funerals were in fact the sole source of the infections.

“It created fear: Who will be at the gathering that I’m going to on Sunday, that funeral, or that wedding? Do I go? Do I not go?” said Mr. Simmons, whose church was not connected to either funeral. “People began to say, were you at the funeral? That became a question.”

The city’s churches, he said, began to feel unfairly singled out.

“That is the focus: the church, the church,” he said. “It has done damage because there is stigma. There is almost this wall of hostility that has been raised between certain parts of the community and the church.”

Ms. Johnson, whose family hosted the Feb. 29 funeral, said the speculation had been painful.

“I have family members angry because people are saying that my brother was the culprit,” she said. “He’s a dead person. He’s not even breathing. But they’re angry because the rumor mill is saying that he was the spreader of the virus.”

A scramble for care

By last week, the question of how the virus had entered the county had been eclipsed by the number of people sick and dying. Mr. Mitchell’s companion, Ms. Murray, has been hospitalized and discharged twice, the last time on March 24, against her daughter’s protests.

“I begged them not to let her come home, but they did it anyway,” Ms. Bell said. “They brought her into this house like a sack of potatoes, on a stretcher.”

Ms. Bell, 49, said she did not have the strength to turn her mother over in bed, and had called repeatedly to ask for help.

She feels, she said, “as if they sent my mother home to die.”

Phoebe Putney is diverting patients to other Georgia hospitals at a rate it has never before approached, transferring 40 in a recent 72-hour period, Mr. Steiner said. But he denied that any gravely ill patients have been sent home.

“Anybody we’ve discharged has been discharged appropriately, clinically,” he said.

Mr. Simmons said that many families are struggling to care for the sick at home, and that for some, a sense of panic has begun to set in.

“Part of the control in life is thinking, if you needed help, you’ve got somewhere to go,” he said. “When that is taken off the table, all sense of control is gone, and hope starts fading.”

He read aloud text messages he received over the weekend. “Please continue to pray,” one said. “My mother, my grandmother and my grandfather have been admitted to the ER with coronavirus symptoms.”

Then, later, “My mother has died.”

For Ms. Johnson, only one person mattered last week.

Her daughter, Tonya M. Thomas, was all she thought of while she was in the hospital. The illness had hit them almost simultaneously, but unaccountably, her 51-year-old daughter was the worst hit, with double pneumonia.

“I was trying to feel better so I could come up here and take care of my daughter,” said Ms. Johnson, a retired oncology nurse. “I felt like if I hadn’t been in the hospital I could have advocated for her.”

She arrived in time, at 5:45 on Friday afternoon, to be with Ms. Thomas as she died. She called her “a beautiful spirit,” her family’s center.

She unplugged her daughter’s ventilators and removed the IV tubes from her body.

Ms. Thomas’s husband, son and sister Abrigale were in the room.

“It just hurts so bad, I just don’t understand it,” Ms. Johnson said. “We came together at a funeral of someone we love, and everyone came up and got sick.”

Her daughter’s funeral will be at the graveside, with no more than 10 people present, in accordance with social distancing regulation.