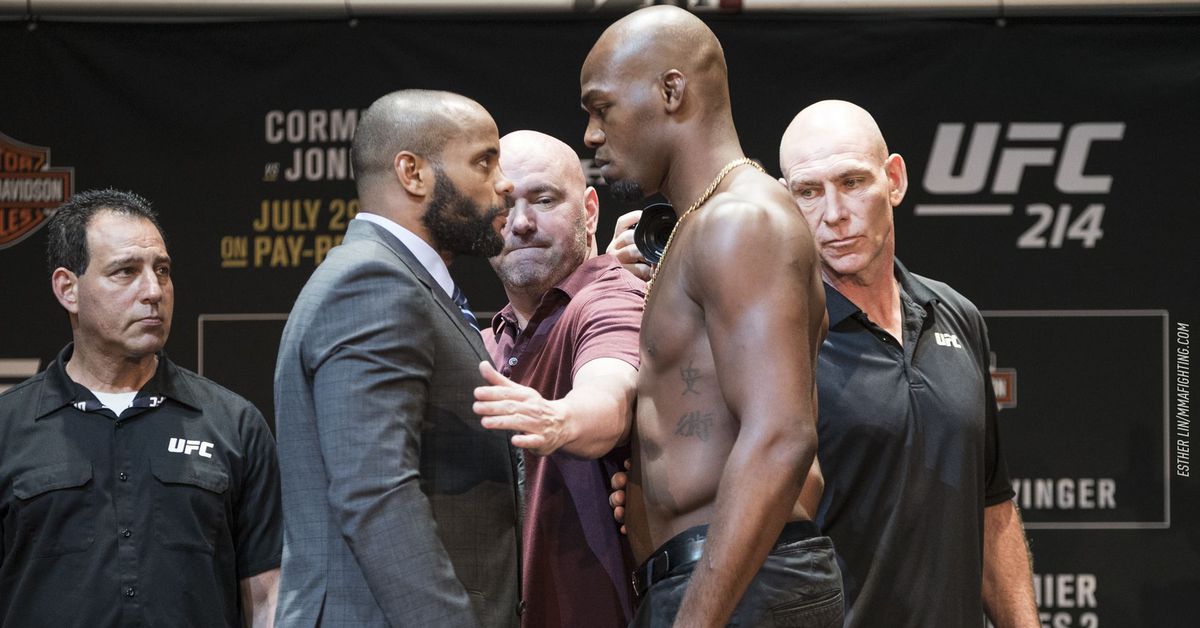 Daniel Cormier will never be Jon Jones’ biggest fan. But as much as he might dislike his longtime rival, the former two-division UFC champion refuses to kick him while he’s down.

“Seeing him get into trouble again, a lot of people in my circle text me almost celebratory, but that’s not me,” Cormier told ESPN on Monday. “I didn’t celebrate the kid getting into trouble again. I don’t think you should celebrate or dance on someone’s grave in their darkest moments. Because you don’t do that to people.”

This past Thursday, Jones was arrested in Albuquerque, N.M., on charges of aggravated DWI, negligent use of a firearm, possession of an open container and no proof of insurance while driving. He was later released from jail, but is due back in court on April 8 to answer for the charges.

It’s just the latest in a long line of incidents involving the fighter routinely regarded as the greatest MMA fighter of all time.

Despite his personal feelings, Cormier said he’s not going to take cheap shots at Jones while he’s obviously dealing with a serious situation.

“Are you a human being, or does this competition take over everything? I didn’t find any joy seeing that man in that situation again because it’s just bad,” Cormier said. “It’s not just him. He’s got daughters. He’s got a fiancée. He’s got so many things at home that are affected by this and affected by his actions and his behavior.”

“Ultimately, are you a human being or does this competition overtake everything? I didn’t find any joy in seeing [Jon Jones] in that situation again.”

Even though they are rivals, Daniel Cormier did not celebrate when Jon Jones was arrested again. (via @dc_mma, @arielhelwani) pic.twitter.com/ZlwoWfFkfT

Jones first faced DUI charges back in 2012 after he crashed his Bentley into a telephone pole, which eventually cost him a fine and a six-month suspension of his driver’s license. Then in 2015, Jones was involved in a hit-and-run accident where he crashed into two different vehicles – including one with a pregnant woman – before fleeing the scene. Jones was arrested and later pled guilty to leaving the scene of an accident, which put him on probation for the next 18 months.

Following this latest incident, Jones will be arraigned on April 8. He has yet to make any public statements regarding the arrest or his pending charges.

Unfortunately because this seems to be a pattern of behavior, Cormier doesn’t expect Jones to get scared straight just due to his most recent arrest.

“It won’t change,” Cormier said. “It won’t change until something or the people around him change. I think about my rivalry with Jones, and I’m not some black power guy, but as much as I dislike him in terms of personally – I hate him in a lot of ways and I think a lot of it is the wasted talent and potential to be such a massive star. But I hate seeing a young, black athlete in that situation even more than my disdain for him. I don’t like seeing that, cause it’s almost what people expect, and I don’t want that to be the way it is for these young athletes.

“I’m watching him and I’m just like, this dude is messed up. You can’t help but feel the kid is just messed up. It’s a sad, sad — it’s like watching Dwight Gooden, Daryl Strawberry and all those guys all over again.”

Cormier added that while Jones’ issues could be written off years earlier because he was still in his mid-20s, the same excuse can’t be made now that he’s 32.

The way Cormier sees it, Jones is just going to continue down this same path until somebody really makes him pay for his actions.

“This kid has a problem,” Cormier said about Jones. “Regardless of how I feel, it’s not going to change until somebody takes a drastic action, and I don’t he’s going to get it in his relationship because — and I don’t want to speak on a man’s personal relationship — but you would think by this point something with that would have happened already with all the issues. The UFC has to take an action.

“It’s only going to continue to escalate until it’s something that he cannot recover from.”