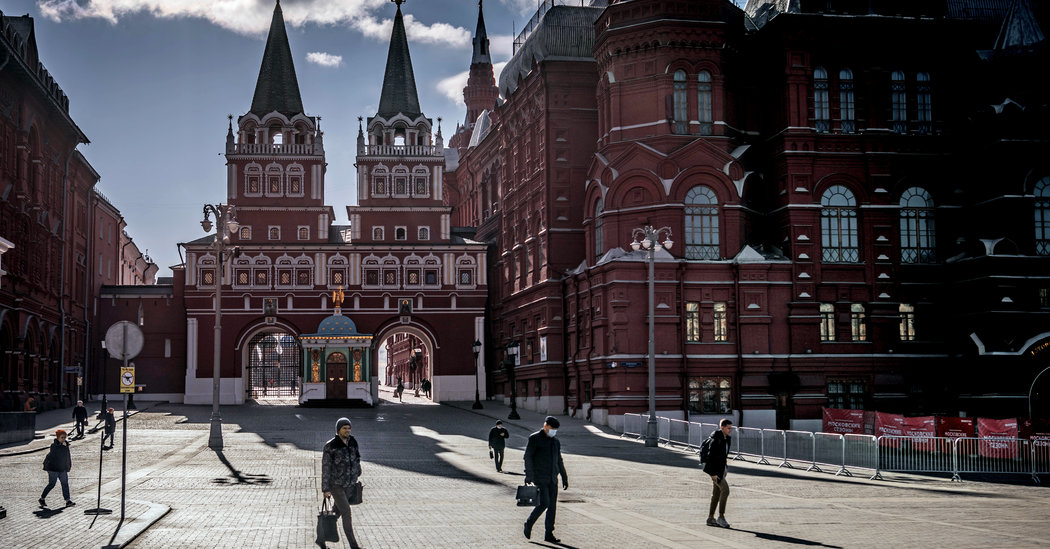 MOSCOW — Russia’s propagandist in chief was seconds away from starting his show on state television, a two-and-a-half-hour fiesta of flattery celebrating President Vladimir V. Putin’s coolheaded response to the coronavirus pandemic and Russia’s calm in contrast to the lockdowns and panic gripping Europe and the United States.

Then came an alarming update on Russia’s situation from the mayor of Moscow. Because of the virus’s accelerating spread, the mayor decreed on Sunday evening, all residents of the capital would be forbidden to leave their homes starting Monday and will need special passes to move around the city.

By late Monday, at least 14 Russian regions and the country’s second biggest city, St Petersburg, had announced that they, too, were ordering residents to stay at home, indicating that the world’s largest nation, a vast territory covering 13 time zones, could soon be in lockdown.

For weeks the Kremlin and its cheerleaders in the state news media have insisted that, unlike Italy, Spain and, more recently, the United States, Russia could tackle the virus without major disruption.

But in recent days they have come around to where much of the world has been for some time: forced to accept desperate measures to try to contain the outbreak.

In a country where all important events usually revolve around Mr. Putin, however, the president has been curiously absent or tardy.

He held a teleconference on Monday with the Kremlin’s representatives in the regions, endorsing Mayor Sergei Sobyanin’s lockdown decree as “justified and necessary” while presenting himself as the defender of ordinary Russians by ordering a crackdown on speculation and price-gouging.

“Our country is one big family,” Mr. Putin said. “But as they say, ‘Every family has its black sheep.’”

By the official count, Russia has 1,836 confirmed cases — far fewer than the 143,000 in the United States and the nearly 100,000 in Italy, but a fivefold increase over a week ago. Only 14 Russians have died from Covid-19, the disease caused by the virus.

But the number of infections in the country has been growing rapidly, posing a test for Mr. Putin’s security state.

Of the 302 new cases nationwide reported on Monday — the biggest one-day rise yet — 212 were in Moscow, Russia’s largest city.

Russia has conducted more than 260,000 tests, but this includes cases of multiple tests on the same person, lowering the head count considerably.

Holed up for much of the past week at his country estate outside Moscow, Mr. Putin left it to Mr. Sobyanin to order the city’s 13 million residents to stay at home. On Monday Mr. Sobyanin vowed “tougher and tougher measures” to keep people indoors.

As snow returned to the capital, the police cordoned off parks in downtown Moscow but did not stop pedestrians. Traffic on the city’s central ring road, while lighter than usual, was still heavy.

There was no sign of panic, despite efforts to stoke it on social media, where anonymous fake reports and videos appeared of troops and armored vehicles advancing on the capital to take control.

For the moment, the restrictions in Moscow seem to have reassured rather than alarmed the public. They also turned pet dogs into especially valuable possessions, since the only outdoor leisure activity permitted under Mr. Sobyanin’s order is walking a pet within a 100-yard radius of home.

Walking her corgi on a back street in the center of the city, Anna Ivanova, a 55-year-old economist, said she supported the lockdown and believed that Russia has the pandemic under control, since she does not know many people infected with the virus.

Russian stubbornness, she added, meant that the authorities needed to introduce controls step by step if the public is to obey them. “If we were to enact tough measures immediately, we’d have the same kind of panic as in Italy,” she said.

As typically happens in times of crisis, many Russians recalled that they had seen much worse before.

The coronavirus, said Lyudmila Yevgenyevna, 64, is nowhere near as perilous as World War II or the siege of Leningrad. “Everything passes,” she said. “Wars end, as do epidemics and quarantines.” she said.

But others wondered whether the virus really exists. “I don’t believe in coronavirus,” said Larisa Ilyinichna, 60. “Our authorities need this for something.”

Russia closed its 2,600-mile border with China in late January and said this weekend that it was closing all land borders with the dozen other countries with which it shares a frontier.

The first crack in the Kremlin’s facade appeared last Wednesday, when Mr. Sobyanin warned Mr. Putin publicly that the real number of sick people was “much bigger” than official numbers indicated. That, he said, was because many of those returning from hard-hit European countries had not yet been tested.

More troubling, a still small but growing portion of recent infections are the result of community transmission rather than people returning from abroad. A sudden surge in infections would probably overwhelm Russia’s extensive but often ramshackle state medical system.

But much of it, particularly in more remote areas of the country, is plagued by shortages of money, medicine and modern equipment.

The Moscow mayor’s stay-at-home order is technically a “recommendation,” as the city government has no legal right to confine people to their homes.

But it suggested that at least some senior officials are taking the coronavirus threat seriously, rather than viewing it merely as something that the state media can use to gloat over the travails of foreigners and promote Mr. Putin’s image as the savior of a besieged country.

Much of a flagship news show on Sunday — presided over by the firebrand host Dmitri Kiselyov — focused on Mr. Putin’s visit to the infectious diseases hospital and on how, showing steely courage that was said to have surprised even his close aides, the president went inside alone, without his bodyguards.

In a reprise of the action-man stunts that have been staged throughout his 20 years in power, Mr. Putin put on a canary-yellow protective suit and gas mask.

To remind Russians of their president’s hands-on style, Mr. Kiselyov showed pictures of Mr. Putin’s previous exploits: flying in a fighter jet, descending into the sea in a submarine and visiting front-line soldiers in Syria.

Mr. Putin, he gushed, “shows up in person everywhere.”

The question now, however, is whether Mr. Putin will also “show up” and take ownership of a coronavirus crisis that risks spiraling out of control, as it has done in other countries. Doing that would endanger the image, carefully constructed over two decades and the basis of his widespread popularity.

So far, Mr. Putin has left it to Mayor Sobyanin and the newly appointed prime minister, Mikhail Mishustin, to announce decisions that will only annoy many Russians.

Mr. Mishustin on Monday called on local authorities around the country to follow Moscow’s lead and order people to stay home.

Mr. Putin, always wary of associating himself with bad news, last week delivered a surprise television address to the nation, warning that Russia “cannot isolate itself from the threat,” but then announced a weeklong paid vacation for the whole country.

This left the streets of Moscow and other cities filled with people enjoying their time off. The Kremlin later had to clarify that the country was not being given a bonus vacation but was simply being asked to stay at home.

Tatiana Stanovaya, a nonresident scholar at Carnegie Moscow Center, said that Mr. Putin’s public detachment from the health crisis fit into what, since he annexed Crimea from Ukraine in 2014, has been his view that the presidency is not so much a job as a sacred mission.

“This is all connected to his sense of having a personal mission,” she said. “Why should he spend his sacred political capital on a virus?”