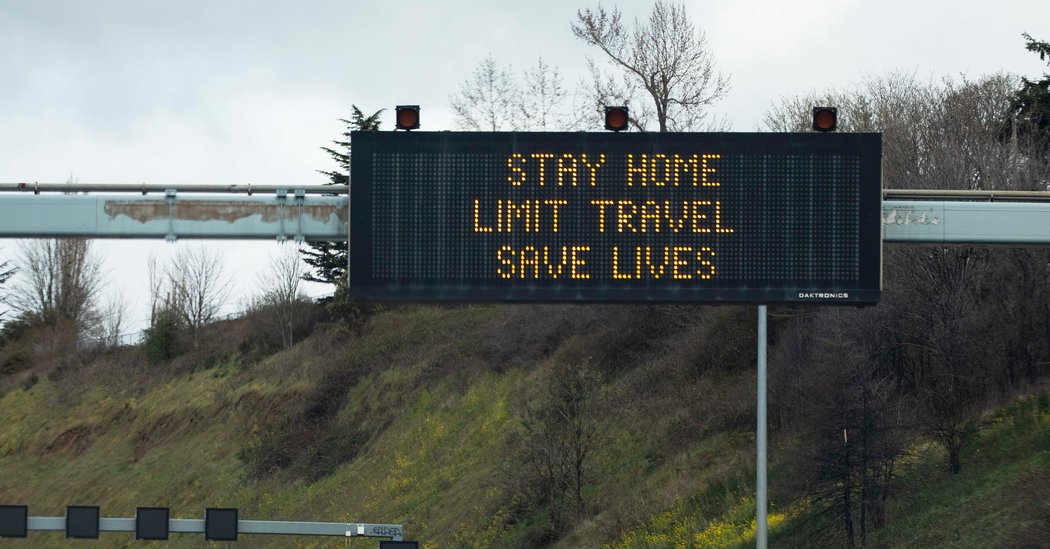 SEATTLE — The Seattle area, home of the first known coronavirus case in the United States and the place where the virus claimed 37 of its first 50 victims, is now seeing evidence that harsh containment strategies, imposed in the earliest days of the outbreak, are beginning to pay off — at least for now.

Deaths are not rising as fast as they are in other states. Dramatic declines in street traffic show that people are staying home. Hospitals have so far not been overwhelmed. And preliminary statistical models provided to public officials in Washington State suggest that the spread of the virus has slowed in the Seattle area in recent days.

While each infected person was spreading the virus to an average of 2.7 other people earlier in March, that number appears to have dropped, with one projection suggesting that it was now down to 1.4.

The researchers who are preparing the latest projections, led by the Institute for Disease Modeling, a private research group in Bellevue, Wash., have been watching a variety of data points since the onset of the outbreak. They include tens of thousands of coronavirus test results, deaths, and mobility information — including traffic patterns and the movements of anonymous Facebook users — to estimate the rate at which coronavirus patients are spreading the disease to others.

The progress is precarious, and the data, which was still being analyzed and has yet to be published, is uncertain. Officials said that expansive social distancing policies will remain a key part of daily life for weeks to come.

But the findings offer a measure of hope that the emergency measures that have disrupted life in much of the nation can be effective in slowing the spread of the disease.

“We made a huge impact — we slowed the transmission,” Seattle’s mayor, Jenny Durkan, said in an interview. She cautioned that any lifting of restrictions would bring a quick rise in new cases, and that she expected distancing requirements to continue in some form for months.

“There is evidence that doing the aggressive measures can have a benefit,” Gov. Jay Inslee said in an interview, discussing the overall numbers he is seeing.

But the governor said that the state was far from turning a corner. While there are indications of improvement, he said, he has also seen numbers in the last few days that still have him worried, including a rise in positive test results statewide and the emergence of new cases in rural areas.

He said more restrictions may yet be needed, and that the state is not “within 1,000 miles of declaring victory.”

“It would be grossly irresponsible to stop these measures now,” Mr. Inslee said.

President Trump said on Sunday that the federal government’s guidelines for social distancing would remain in place until April 30, backing down from his previous comments that he hoped the country could go back to work by Easter.

Mr. Trump had clashed with public health experts around the country when he suggested that the guidelines — which urge people to stay at home and not to gather in groups of more than 10 — might be relaxed by April 12.

Washington state, which enacted some of the nation’s earliest and most stringent containment policies, has continued to see its death toll climb: The state recorded 23 deaths on Friday, the most in a single day since the outbreak began; 16 were in King County, which includes Seattle. All told, Washington State has had 4,319 confirmed coronavirus cases through Sunday.

The largest outbreak in the country is now in New York, which reported 237 deaths on Sunday, the state’s deadliest day so far. The number of confirmed cases there jumped by 7,200, reaching 59,513. More than half — 33,768 — were in New York City, where hospitals and the city’s 911 system have been overwhelmed.

“I don’t think there’s any way to look at those numbers,” Gov. Andrew Cuomo of New York said, “without seeing thousands of people pass away.”

With so many states now deep in crisis, the signs of provisional success in the Seattle area offer a lesson for other cities and regions that are just beginning to see the onset of the coronavirus: Early and aggressive action to contain the spread may help lower the trajectory of a virus that could otherwise overwhelm health systems.

Officials in Washington State first began to plead with people to keep their distance from one another at the end of February, after discovering that the virus had infected people in the Seattle area with no known exposure or history of foreign travel, followed by an outbreak at a suburban nursing home now linked to dozens of deaths.

Within a week, the county was asking organizations to consider postponing large events and for people to work from home if possible. People over 60 were encouraged to remain indoors. Some of the region’s major employers, including the headquarters campuses of Amazon and Microsoft, responded by encouraging workers to work from home, quieting workplace hubs that would otherwise be bustling during commutes and lunchtime.

The demographics of those workplaces, with tens of thousands of tech workers who were able to telecommute, may have given the region an early edge in keeping people separated. Perhaps the city’s social norms helped, too, as local residents have long had a reputation for keeping to themselves or within circles of longtime friends — a phenomenon often explained to newcomers as the Seattle Freeze.

Ms. Durkan said the region also benefited from a robust network of researchers who were able to do early modeling to assess the reach of the virus in the community. Without that, she said, policymakers may not have taken the drastic steps to shut down the city as quickly as they did.

The region has also benefited from more widespread testing than most states, helping feed data to the researchers’ models and give a sense of how much infection might be missed.

After scientists found evidence that the virus had been circulating weeks before some of the earliest cases were identified, researchers from local groups, led by the Institute for Disease Modeling, began looking at what it would take to slow the progress of the virus. On March 10, they developed projections showing that significant changes in human-to-human contact would be needed to avert hundreds more deaths by April 8.

That projection helped guide a series of actions: The next day, on March 11, Mr. Inslee banned events of 250 people in three Seattle-area counties — a measure that was soon adopted across the state and by other governors — and the Seattle Public Schools announced they would close.

Mr. Inslee warned at the time how drastically life needed to change, saying it was unacceptable for people to be crammed close together at bars and other settings; the restrictions, he said, were going to be “profoundly disturbing to a lot of the ways that we live our lives.”

That same day, with case numbers also rising in New York, Mayor Bill de Blasio was not yet endorsing such limits. “People should go out and continue to live life, should go out to restaurants,” Mr. de Blasio said.

Washington State’s coronavirus figures have continued to grow steadily, but not as fast as other states’. The death toll has been doubling about every eight days in Washington, compared with every two or three days in New York, Michigan, New Jersey and Louisiana.

Hospitals in Washington have yet to be overrun, although there are continuing concerns about supply shortages and worries that growing caseloads could still become a problem.

While the restrictions have apparently helped slow the virus, they have devastated businesses, in particular restaurants and hotels. The Space Needle is closed. Pike Place Market’s breezeways are largely barren. As in other parts of the country, unemployment claims have soared.

Ubah Dahraan, who drives for Uber and Lyft in Seattle, said she began seeing business decline in the first week of March, well before the major mandates imposed by state and local leaders, as city residents started to stay home voluntarily.

A single mother with three teenagers living in her apartment, Ms. Dahraan said the family doesn’t go outside now, focusing instead on prayer, cooking, reading, and keeping in touch with friends by phone. Originally from Somalia, Ms. Dahraan said she hears every day from relatives who are worried about her, including those whom Ms. Dahraan has supported financially in the past.

“One said, ‘I wish I could help send you money to pay bills. This time it’s your turn,’” Ms. Dahraan said.

Dr. Jeff Duchin, who is Health Officer for the regional health agency, Public Health Seattle and King County, said that while the region is seeing positive effects of social distancing measures, there are still significant numbers of new cases developing. He said the area not only needs to continue the current measures, it should also watch to see whether additional containment efforts are needed.

“The threat of a rebound that could overwhelm the health care system remains, and will remain for the foreseeable future, if we let up too soon,” Dr. Duchin said.

Many of the Seattle area’s cases surfaced in the suburb of Kirkland, at EvergreenHealth Medical Center, which has handled some 246 confirmed cases and 47 deaths.

Dr. Jeff Tomlin, the medical center’s chief executive, said on Sunday that the number of cases there has remained steady in recent weeks. At times when the hospital’s intensive care unit has neared capacity, he said, it has been able to turn to other nearby hospitals for help.

“It would seem for now that it appears manageable, but I would be very hesitant to make any predictions,” Dr. Tomlin said.

In other parts of the state, concerns are still growing. Dr. Marty Brueggemann, the chief medical officer at Virginia Mason Memorial in Yakima, a city in central Washington, said his hospital is just starting to see cases arrive. While only about 100 cases have been confirmed in the area so far, Dr. Brueggemann said he expects that there are thousands more that are undetected, and that those who eventually need hospitalization may not reach that point for days yet.

Dr. Brueggemann projects that in the next two weeks his hospital may find itself without enough ventilators. But he said he was encouraged by what he has seen in Seattle.

“A lot of us are crossing our fingers and hoping that maybe, maybe, maybe we’ve done some good here,” Dr. Brueggemann said. “We’re not ready to let our guard down.”