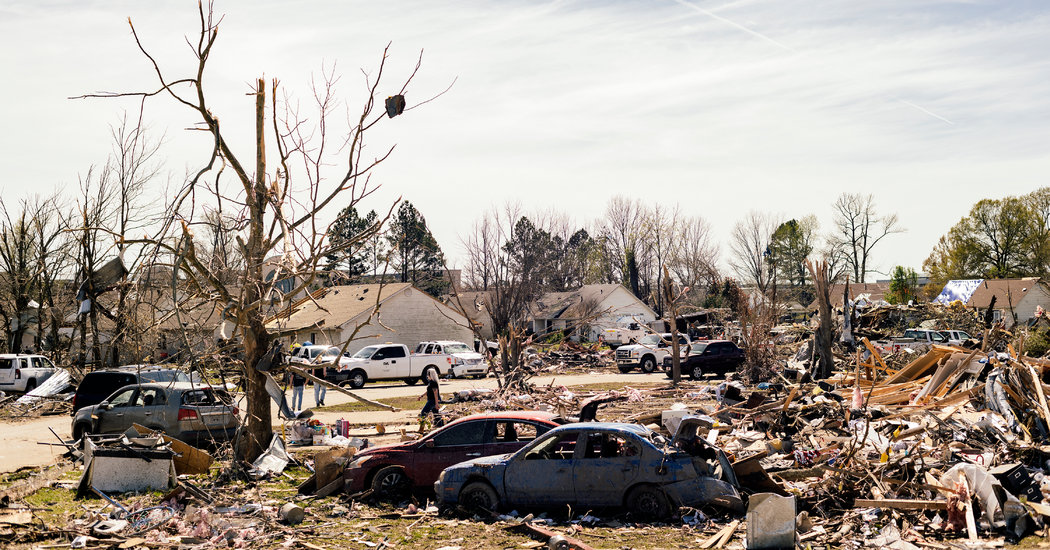 ATLANTA — Some in Jonesboro, Ark., saw a miracle on Saturday after a tornado roared through town. It tore through businesses already closed by the coronavirus and neighborhoods where people had already been told to social distance by hunkering down at home. Not a soul died.

Now comes the really hard part: rebuilding and moving on together while officials still urge residents to stay apart.

The tornado gashed a scar of devastation that stretched on for more than four miles, scraping through the heart of the city’s commercial district, destroying hangars at the municipal airport and pulverizing homes in several subdivisions.

But the morning after the tornado had passed, many acknowledged that the measures that had been put in place to thwart the coronavirus had saved lives in an unintended way. The J.C. Penny and Barnes & Noble stores that typically bustle on weekends were closed. And so were restaurants, which would have been preparing for the early dinner crowd when the tornado hit just after 5 p.m.

“Actually, that’s the blessing,” Bishop Adrian Rodgers, the pastor of Fullness of Joy Ministries, said on Sunday from his empty church, where he has been broadcasting his sermons to a congregation watching on Facebook.

Marvin Day, the judge for Craighead County, of which Jonesboro is the seat, added: “Truthfully, we are feeling very blessed and grateful. Our human tragedies could have been a lot worse.” The authorities said 22 people were injured, but only two were hospitalized. Neither had life-threatening injuries.

Still, the tornado on its own would have created considerable hardship for a community, which now must rebuild. But it struck at an already difficult moment, as officials were contending with the coronavirus outbreak that had infected six people in Craighead County and caused many residents to lose their jobs or have their working hours reduced.

“In the midst of this response, maintaining the appropriate posture with regard to Covid-19 is going to be an added challenge,” Representative Rick Crawford, a Republican who represents the area, said at a briefing on Sunday morning.

As in most of the country, normal routines have been cast aside in an effort to curb the virus. Gatherings of more than 10 people are forbidden. Businesses that were not deemed essential have closed, and restaurants have shut down their dining rooms. Students at the local school district were off last week for spring break, but starting this week, they will be taking online classes, with school canceled until at least April 17.

“Our community is taking the virus precautions to heart,” said Bobby Long, a city councilman who represents one of the hardest hit areas of the city.

But the measures were becoming tougher to maintain, with the virus, which remained an invisible and undefined threat for many, being superseded by a disaster that left a path of wreckage that was much more tangible.

“All of this social distancing, for me now, is over,” said Diane Bizzle, who has asthma and was isolating herself for the past few weeks. “As soon as it passed, all of the neighbors were outside, checking to make sure everyone was OK. You go out and you talk to them. You’re hugging.”

Curtis Brown, 54, worked with a friend to clean up after his fence and pine trees were knocked down and windows were shattered. But he has not let his guard down with the virus. “We’re all doing the elbow bumps,” he said, “and standing a distance from people. Using hand sanitizer. All of that.”

In a city peppered with churches, the tornado was the kind of event that had many people wanting to gather with the rest of their congregations to find solace and community. Bishop Rodgers said that his congregation would continue to support its members in many ways and check on their well-being. But it would have to be at a distance.

“We certainly want to be good citizens,” he said, adding that he knew of a funeral that had been attended by one person who was sick, which spread the virus to others. “All it takes is for one person to be sick, and many have been affected.”

As the tornado touched down, moving from south to north, some said they were at home watching the local television news, seeing in real time the funnel forming over the meteorologist’s shoulders. It caused significant damage at the Mall at Turtle Creek and at an Anheuser-Busch granary. Cars were picked up and tossed aside. Part of a freight train was knocked over.

“All I could hear was just the most horrific exploding,” said Sharon Gore, 60, who could see the destroyed mall from her driveway. “There was so much glass cracking. I couldn’t believe it. I was just calling the name of Jesus over and over again, because I couldn’t even get a prayer out. It was like bombs were dropping.”

Jonesboro, a city of about 75,000 in northeast Arkansas, had been devastated by tornadoes before. A storm in 1968 killed 34 people and injured some 300 others. Another storm in 1973 also left a trail of destruction. Three people were killed, but it was hailed as a “miracle” for not being deadlier.

“If the storm had struck just a few hours earlier, it would have caught hundreds of shoppers in the Carraway Road area, which was pounded with savage fury,” wrote Mike Overall, city editor of The Jonesboro Sun, according to a retrospective published in 2013 by Memphis magazine. “And, everyone shudders to think what would have happened if the twisters had hit during school hours. Nevertheless, the fact that so many lived was a miracle in itself.”

Mr. Long, the city councilman, pitched in on Sunday morning, covering roofs and boarding up windows. He saw residents picking through debris and clearing yards, and others carrying ice chests and handing out drinks and snacks. He said that keeping distance was difficult for residents, just as juggling the tandem emergencies would be for city officials.

“You do what you have to do to meet the need at the moment, and right now, this is what we’re doing,” he said. “We’re doing our best to keep the virus under control. We will not abandon those people who need us the most at this time.”

He said it was painful to go through some of the harder hit areas, seeing the homes destroyed and, with them, lives disrupted. He was also grateful. “Stuff is stuff,” he said. “It’s people that matter.”

His voice broke as he described walking through the subdivision Bridgers Place. He approached one home where the roof had been shaved off and wooden beams inside had splintered. But Mr. Long teared up and had to pause as he recalled looking in one of the windows, where he saw a sign still tacked on the wall. “Blessed,” it said.