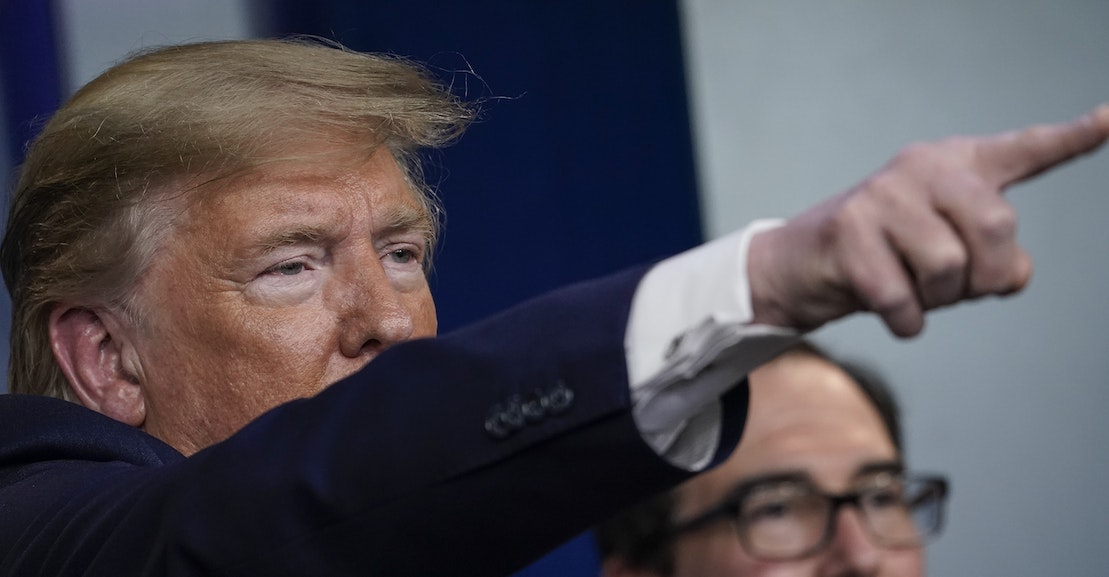 Reports began emerging earlier this week that
President Donald Trump has been getting
restless about the severity of the nation’s response to the coronavirus
pandemic, worrying both that the crisis would both continue to occupy his
attention well into the remainder of the year and that the economic impact of the
efforts to contain the virus could be ruinous for his reelection prospects.
Those reports were seemingly confirmed after the president retweeted several supporters
urging the administration to endorse a limited mitigation strategy, as well as
a tweet from Trump himself on Sunday, in which he argued that the country “cannot
let the cure be worse than the problem itself.” He elaborated on this at his Monday
press briefing. “I
think we’re very substantially under 1 percent now,” he said, referring to coronavirus’
mortality rate. “It’s still terrible. It’s still the whole thing. The whole
concept of death is terrible. But there’s a tremendous difference between
something under 1 percent and 4 or 5 or even 3 percent,” he added.

It is
true that there is a large difference between a number lower than one percent and more than three percent. It is also true that if half the country contracted coronavirus, a
mortality rate of 0.5 percent would imply over 800,000 dead. In a widely
circulated epidemiological report from Imperial College London, it
was estimated that approximately 1.2 million Americans would die if the
country as a whole pursued the strategy Trump is evidently interested in—a limited mitigation approach with social distancing, quarantines of
the infected and exposed, and a focus on isolating the elderly and high at risk.
Millions more, of course, would fall ill—many critically so—and
the effort to absorb them into the nation’s hospitals would crush the American
healthcare system.

Even
granted a point Trump has been making—that the recession now underway will also kill many—the best mortality and infection
estimates available make plain that an attempt to return to business as usual
as the virus continues to spread would bring about an even worse economic
debacle. Beyond the dead, tens of millions of sick and merely terrified
Americans would be financially incapacitated, burdened either by the costs of
care or the heaviness of a fear that would have them squirrel their money away.
Countless businesses, unwilling or unable to bring in customers and their sick
or defiant workers, would remain closed.

The
choice the country now faces isn’t between public health and economic
stability. We are choosing which public health and
economic catastrophe we would like to see unfold. And one is plainly preferable.

Nevertheless,
Trump said Tuesday that he’d like to see a return to normal activity by Easter. The following day, he intimated that efforts to keep businesses closed were part of a media
conspiracy to deny him reelection. Importantly, he cannot actually end the
shutdowns on his own. The authority to re-open business
ultimately lies with the governors who have taken action, and it’s difficult to
imagine blue state leaders like New York Governor Andrew Cuomo and California
Governor Gavin Newsom simply acquiescing to Trump’s demands as cases in their
regions continue to rapidly increase and public health experts continue to
support aggressive containment. But as New York Magazine’s Jonathan
Chait pointed
out Wednesday, there are tools Trump might use to pressure governors in the
weeks ahead. “States
are dependent on help from FEMA, the military, and other arms of the federal government,”
he wrote. “New York’s Andrew Cuomo is pleading for Washington to send him
ventilators, which he will need within days, or New Yorkers will begin dying
for lack of treatment. As the coronavirus spreads, more and more governors will
find themselves in this position.”

Critically
however, almost half of our states have yet to close all non-essential
businesses in the first place and about 40 percent of the population hasn’t
been made subject to state stay-at-home orders or recommendations. Given this,
the risk is less that Trump could force a reopening of the economy in places
where state officials have taken prudent action than that officials in states
that haven’t done so, especially those in red states, might be dissuaded from
getting serious until it is too late.

That
risk has been compounded by a chorus of conservative voices who have joined
Trump in pushing an end to the shutdowns. The Daily Wire’s
Matt
Walsh and ABC political analyst Matthew
Dowd suggested earlier this week that we should accept the death toll of
mass infection because 35,000-40,000 Americans die in car accidents each year.
Fox Sports’ Clay Travis suggested the same because 8,000 Americans die each
day. “I wish we
were all immortal and no one ever died,” he tweeted.
“But we can’t shut down the country’s economy to keep people from getting
sick.”

The Federalist’s Jesse Kelly,
Texas Lieutenant Governor Dan
Patrick, and Glenn Beck performatively offered themselves to the disease
with Beck telling
his audience that Americans over fifty should be willing to die to the
country afloat.  “I
would rather have my children stay home and all of us who are over 50 go in and
keep this economy going and working,” he said. “Even if we all get sick, I
would rather die than kill the country. ‘Cause it’s not the economy that’s
dying, it’s the country.”

And, as if to prove
the intellectual fragility of the right’s rising anti-laissez-faire
traditionalists, First Things’ Rusty Reno, a putatively heterodox
conservative, offered
an impressively grotesque illustration of the same old fusion between
pseudo-piety and market ideology that has always defined the movement’s
mainstream. “The mass shutdown of
society to fight the spread of COVID-19 creates a perverse, even demonic
atmosphere,” he wrote. “Governor Cuomo and other officials insist that death’s
power must rule our actions. Religious leaders have accepted this decree,
suspending the proclamation of the gospel and the distribution of the Bread of
Life. They signal by their actions that they, too, accept death’s dominion.”

The reality all this grandstanding evades is
that there is, again, no real trade-off here.

The reality all this grandstanding evades is
that there is, again, no real trade-off here. There will be socioeconomic
devastation as a consequence of state lockdowns and there would be deeper
socioeconomic devastation as a consequence of the virus’ poorly contained
spread, which would destroy our healthcare infrastructure and kill American
civilians in extraordinary numbers. But this posturing is second nature on the
right: The people we hear as raving imbeciles are, for conservative audiences,
daring provocateurs broaching hard questions the left is too timid, frail, and
sentimental to touch. Of course, the right can deploy discourse-smothering
emotion when it wants to. These are the many of the same people
who have spent nearly twenty years accusing anybody condemning American
imperialism, jingoism, and Islamophobia of dishonoring or forgetting the nearly
3,000 Americans murdered on September 11. They’ve turned now not only to
minimizing a national tragedy that will kill many more Americans than died that
day, even as we’re watching it unfold, but insisting that others undertake a
conscious act of mass human sacrifice—an unfathomable letting of
American blood—in the service of market and social forces that they do not even
understand.

The one true thing they managed to grasp in
the aftermath of that attack, and that evidently escapes them now as they
babble about the flu and car accidents, is that the psychic weight and material
consequences of a shock to the system are far more difficult to contend with
than the weight and consequences of casualties our systems regularly and
gradually absorb. What is taking place right now will add
to the number of preventable deaths we already tally annually. We will not
be getting the coronavirus instead of the flu, or car accidents, or heart
attacks, or cancer, this year. We will be getting all of them. And, critically,
patients with the virus are on pace to take up all of the available hospital
beds in regions across the country.

The threat facing us is great enough that Fox
News has ended its in-studio guest bookings, even as those guests, comfortably
ensconced in their own homes, rant and rave about overreaction and the urgent need
to send people back into their workplaces. But if all America opened up again
tomorrow, it would not be Glenn Beck, the Fox pundits, or the staff of the
Federalist who would man our cash registers, restock our retail shelves, or
wash the dishes and clean the hotel linens of the defiantly infectious. These
are men patting themselves on the back for their willingness to continue laboring
in a totally marginal sector of the American economy. To them, the people
performing the labor that actually keeps the country running are merely raw
materials—less human beings than replaceable fitted parts for the engines of
wealth creation.

This is all out in the open now—an
unmasking and a clean mental break brought about by an unwillingness to
acknowledge the desperation of our situation. The United States will soon pass
China in the number of documented coronavirus cases. As wished, we are the
world’s exception. And we are out of options, with neither the power nor the
agency to invent better ones. The undefeatable country has already been
defeated, less by the virus itself than by a frail healthcare system, decrepit
institutions, and a discourse populated by idiots,
ogres, and ghouls.